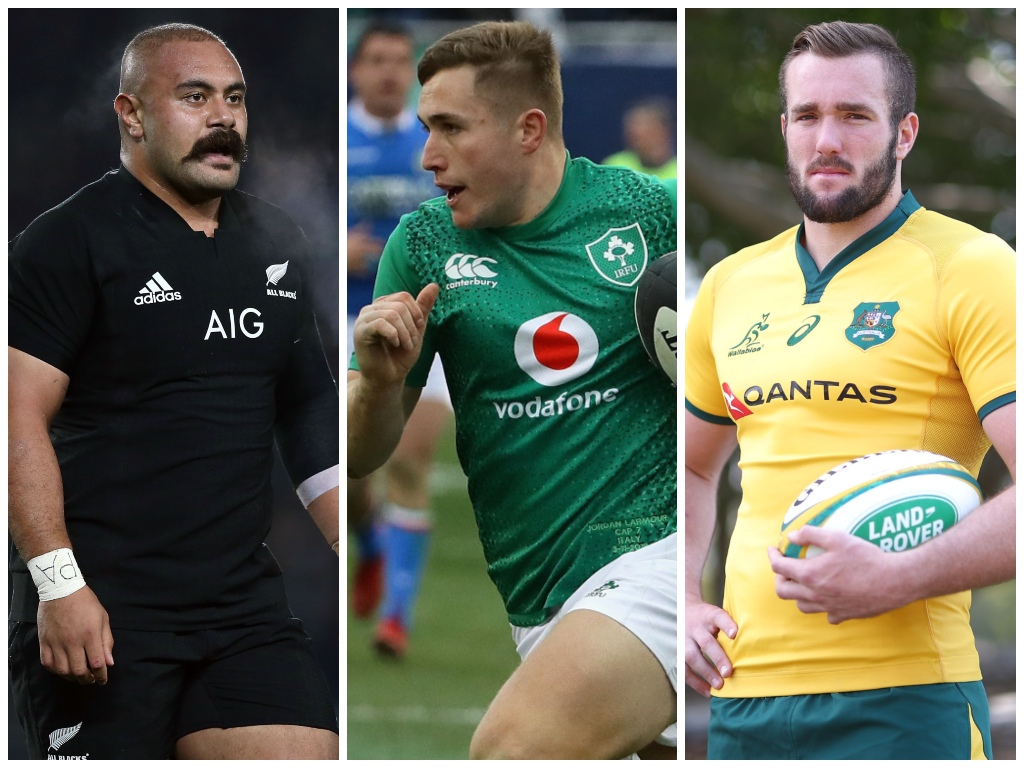 Getting your shot in the first-team is part of the ongoing battle for many rugby hopefuls, but in 2018 these up-and-coming starlets made it big.

Their sterling efforts have not gone unnoticed by us here at Planet Rugby and we have consequently cobbled together a XV that although lacks in caps, it makes up for in quality.

Here we go then…

Newbies of the Year

15 Jordan Larmour (Leinster and Ireland): His talent has been well known for a while but he’s burst onto the scene this year. Made his Leinster debut in September 2017 but it was his try against Munster in January which first caught the eye for those around Europe. An Ireland call-up followed where he featured intermittently for Joe Schmidt’s men in the Six Nations but, when given an opportunity, Larmour impressed. Has been excellent for his province since the 2018/19 northern hemisphere season started and then scored a wonderful hat-trick versus Italy in November.

14 Bautista Delguy (Jaguares and Argentina): Tough on Joe Cokanasiga, who has been exceptional for Bath and England in the second half of 2018, but Delguy’s consistency takes it. Switched from Sevens ahead of the 2018 Super Rugby campaign and immediately stood out, showing pace, balance and a try-scoring instinct. Caused problems for pretty much every team he faced, whether at franchise or international level, and is a bit like fellow Argentinian flyer Santiago Cordero in his style.

13 Semi Radradra (Bordeaux-Begles and Fiji): Seems remarkable to think that the Fijian bulldozer features on the list. After switching from rugby league, it feels as though Radradra has played professional rugby union for years, but his first match came in October 2017. The outside back was immediately superb for Toulon and played a significant role in their Champions Cup quarter-final run, where they were unfortunate to succumb to Munster. Radradra then debuted for Fiji in June and was excellent in the Pacific Islanders’ landmark victory over France, but it was perhaps his performance against England for the Barbarians which lingers most in the mind. On that day, the centre was unplayable as the Baa-baas put 63 points on the Red Rose.

12 Bautista Ezcurra (Jaguares and Argentina): The most difficult position to decide but we’ve gone for Ezcurra, who enjoyed a breakthrough campaign for both the Jaguares and Argentina. Ezcurra actually made his debut for the franchise in 2017 but started to become more prominent in 2018 and was rewarded with some game time for Los Pumas. The 23-year-old is a very intelligent player and linked up well with fly-half Nicolas Sanchez, helping to create the space for dangerous wings Delguy and Ramiro Moyano.

11 Aphiwe Dyantyi (Lions and South Africa): An easy decision this one, particularly with the wing being named the World Rugby Breakthrough Player of the Year. The 24-year-old’s talent was immediate on his Lions Super Rugby debut when the speedster touched down against the Sharks before Dyantyi scored a tremendous double in the following encounter with the Jaguares. Was rewarded for his franchise form with a call-up to the South African team where he improved throughout. Defence has been an issue at times, but you cannot argue with his attacking prowess and Dyantyi was a constant threat for opposition defences. 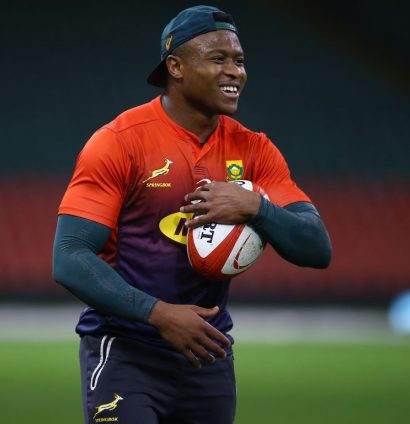 10 Adam Hastings (Glasgow Warriors and Scotland): It would have been Matthieu Jalibert following his exploits for Bordeaux at the end of 2017 and the start of 2018, but he hasn’t played enough since then. In fact, successive knee injuries have cruelly ended the year for the talented pivot, so Hastings, who has been outstanding, takes his place in the XV. He is a slightly later developer after coming through the academy at Bath, but the son of Gavin and the nephew of Scott – two legends in Scotland rugby – has superbly filled the hole left by the departure of Finn Russell. His performances for Glasgow earned him a call-up to the Scotland squad for their June tour and the pivot shone, particularly against Argentina.

9 Embrose Papier (Bulls and South Africa): Hastings’ half-back partner George Horne was slightly unfortunate, but Papier appeared to end the year as second choice number nine behind the superb Faf de Klerk. Papier is quick around the fringes and has a sharp service at the base of the ruck and will expect to push on in 2019. There had been a marked difference between De Klerk and the other South African options at scrum-half, but the 21-year-old will hope to put pressure on the Sale Sharks playmaker.

8 Jordan Joseph (Racing 92 and France): Burst onto the scene at the World Rugby U20 Championship and played a leading role as France won that tournament for the first time. A powerful ball carrier, Joseph enjoys the physical nature of the game and seldom takes a backward step with ball in hand. Still only 18 years old, Joseph can also play on the blindside flank but it’s at the base of the scrum where he has made his biggest impact. Also made his Top 14 debut for Racing 92 a few months ago and did not look out of place at that level.

7 Jake Polledri (Gloucester and Italy): England’s loss is Italy’s gain. English-born Polledri has been one of Gloucester’s most outstanding players and made his senior Test debut for the Azzurri in a narrow Six Nations defeat to Scotland this year. A brilliant breakdown exponent, Polledri is also an adept ball carrier, who has caught the eye with several excellent performances which has made him one of the most exciting prospects in the Premiership.

6 Shannon Frizell (Highlanders and New Zealand): England’s Ted Hill and Scotland’s Matt Fagerson were both in the running having enjoyed breakthrough years, but they didn’t do enough to displace Frizell, who was a bit of a bolter for the All Blacks. The 24-year-old immediately impressed for the Highlanders and served notice of his quality by scoring a hat-trick against the Blues. Frizell is a gargantuan back-rower but also has excellent skills and his off-loading game was to the fore in Super Rugby. With Liam Squire struggling this season, the blindside position is up for grabs and the skilful flanker is more than capable of filling it.

5 James Ryan (Leinster and Ireland): After several outstanding performances, so much has been said and written about Ryan but he is living up to the hype and taking everything in his stride. The 22-year-old has been arguably the find of the year and is playing with a maturity beyond his years. Ryan has been excellent in most facets of play with his ball carrying and defensive work particularly impressive. His lineout work has also been superb and he also gets through plenty of work in the loose.

4 Izack Rodda (Reds and Australia): Another young and up-and-coming second-row, who has caught the eye with numerous outstanding performances throughout the year. Rodda made his Test debut for Australia last year but has kicked on in 2018 and cemented his place in the Wallabies’ starting line-up. The 22-year-old impressed at Super Rugby level and he has blossomed under the tutelage of Reds head coach Brad Thorn, himself a former outstanding lock for the All Blacks. Rodda has an aggressive and abrasive nature to his game and gets through plenty of work at the coalface.

3 Demba Bamba (Brive, on loan from Lyon, and France): Another one of France’s heroes at this year’s World Rugby U20 Championship, Bamba’s impressive performances in that tournament and at club level for Brive in the Pro D2 earned him a call-up to France’s senior squad and he eventually made his Test debut in November against Fiji in Paris. A powerful scrummager and solid in the execution of his other core duties, Bamba is also a strong ball carrier, who crossed the gain-line at will. Still only 20 years of age, much is expected of the youngster, who has a bright future.

2 Pierre Bourgarit (La Rochelle and France): Although not big in size, Bourgarit is one of the game’s brightest prospects and he possesses a brilliant skill-set with plenty of pace to boot. The 21-year-old has already scored some brilliant tries for La Rochelle and despite only joining them in 2017, he has already become a favourite with the Top 14 outfit’s fans. Made his Test debut as a replacement against the All Blacks and was unlucky to be denied a try in that Test after one of his barnstorming runs.

1 Karl Tu’inukuafe (Chiefs and New Zealand): Arguably the most remarkable story of the year, Tu’inukuafe was unlucky to lose out to Dyantyi for the World Rugby Breakthrough Player of the Year award after a stellar season. After catching the eye for the Chiefs in Super Rugby, the former nightclub bouncer earned a call-up to the All Blacks squad. He shone as a replacement for the world champions and was then thrust into the spotlight when he was elevated to the starting line-up after an injury to Joe Moody. Tu’inukuafe was not fazed, however, and stood up well to rigours of the Test arena with some fine showings.