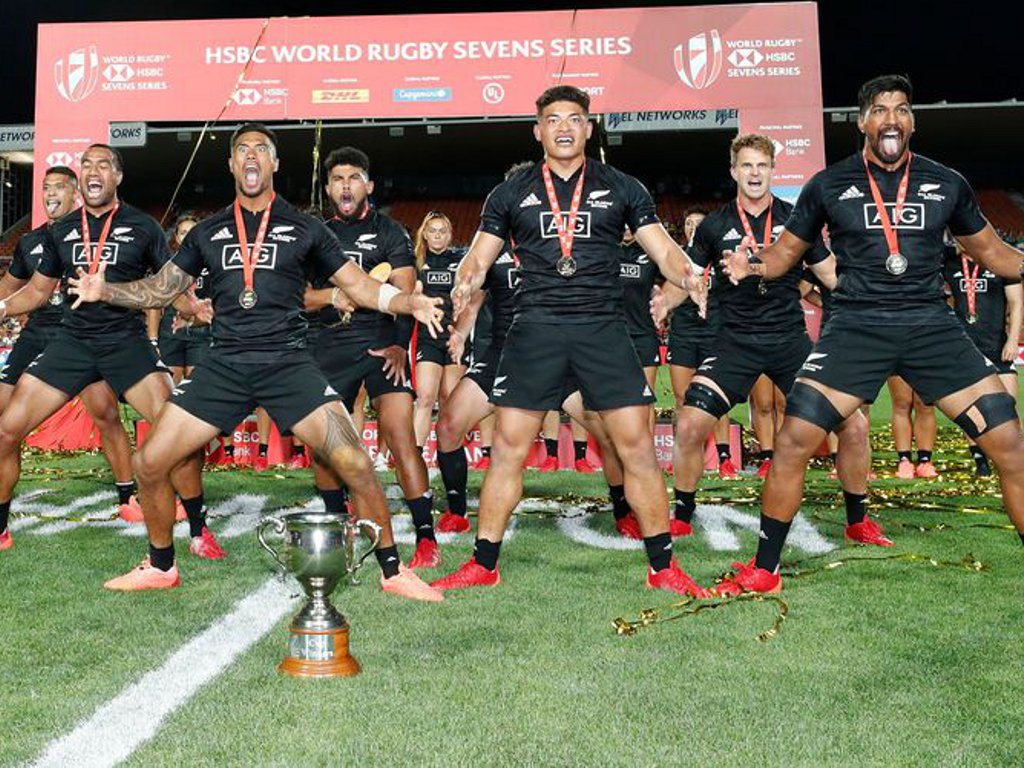 New Zealand extended their record as the most successful team on home soil in the history of the HSBC World Rugby Sevens Series with a 27-5 defeat of France in the Hamilton Sevens Cup final.

The triumph was the All Blacks Sevens’ 10th in their own backyard but the first in Hamilton, having won their last title in Wellington in 2016. It was also their 60th title in series history and the second of the season after victory in Cape Town last month.

France, playing in their first ever Cup final in New Zealand, were on the back foot early on after Tavite Veredamu was sin-binned for not being back 10 metres, All Blacks Sevens co-captain Scott Curry powering through two defenders seconds later to open the scoring.

Veredamu quickly atoned for his indiscretion, scooping up a pass almost rolled around the ground by Remi Siega with one hand to cut the deficit to two points after the conversion drifted left.

France were dealt two blows when Jonathan Laugel was sin-binned for a neck roll and New Zealand made their man advantage count, Regan Ware just keeping his foot in touch as he grounded the ball behind him for a 12-5 lead at half-time.

Ware added a second before Curry scored twice to seal victory and extend the All Blacks Sevens’ advantage at the top of the standings from nothing to 15 points over South Africa, who could only finish 10th in Hamilton, and France on 48 points with England fourth on 39.

All Blacks Sevens co-captain Tim Mikkelson said: “The French have that flair and they’re a team on the rise, they’re playing extremely well. We haven’t gone that well the last couple of years so we felt like we owed it to the crowd and to our families here to go well this tournament.

The teams now head across the Tasman to Australia for the HSBC Sydney Sevens at Bankwest Stadium on 1-2 February, round four of the HSBC World Rugby Sevens Series 2020.

Australia recovered from conceding a try after only 19 seconds of the bronze final to go one better than their female counterparts and win the medal on Australia Day. Alfie Johnson had given England that lead, but tries by Lachie Anderson, Rod Davies and Josh Turner put Australia in control at 21-7 at half-time. Henry Hutchison’s double put the result beyond doubt before late tries by Ollie Lindsay-Hague and Will Edwards made the final score a more respectable 33-21.

Earlier the first ever meeting between France and England in a Cup semi-final in the 21-year history of the series had got the men’s play-off round underway. Remi Siega gave France, playing without their suspended captain Jean-Pascal Barraque, the lead but then a sublime kick-pass from Tom Mitchell put Mike Ellery over to tie the scores at 5-5. France spent much of the second half camped in England’s half and just as extra-time looked to be on the cards, Terry Bouhraoua found a way through to score and when England knocked on from the restart, Les Bleus could celebrate.

The second semi-final was another traditional rivalry and equally as hotly-contested, Ngarohi McGarvey-Black giving hosts New Zealand the lead before Australia captain Nick Malouf and Hutchison tries sent them into half-time with a 14-5 lead. A yellow card for Maurice Longbottom within a minute of the kick-off put Australia on the back foot and the All Blacks Sevens made them pay, two quick tries from Ware and Dylan Collier – his 50th on the series – seeing them into a fourth successive Cup final.

The teams that missed out on the Cup semi-finals were ranked into three bands based on their position in the pools and then seeded into play-offs, the two best runners-up playing off for fifth place and the other two for seventh place and so on down to the 15th place play-off.

USA looked a little out of sorts in the first half of their North American battle with Canada for fifth place, conceding three first-half tries to trail 21-0. They did pull one score back through Kevon Williams, but Phil Berna’s try ensured Canada ended an eight-game losing streak against their neighbours.

Two sides who had caused shocks earlier in the day came face-to-face in the seventh place play-off, Kenya looking in control at 17-7 at half-time only for Argentina to hit back through Felipe del Mestre’s second of the match and Franco Sabato to triumph 19-17.

Fiji and South Africa, winners of the last three New Zealand Sevens, met over ninth place with Angelo Davids’ try after 40 seconds the only first half score with the Blitzboks knocking on a couple of times with the line beckoning. That proved costly when Kavekini Tabu and then Napolioni Bolaca deep into added time snatched a 12-7 win for Fiji to the delight of their huge contingent in the crowd.

The all-Celtic battle for 11th place between Ireland and Scotland was locked at 19-19 until Alec Coombes scored the winning try for the Scots in a match in which yellow cards for each side proved costly on the scoreboard. Invitational side Japan, meanwhile, recorded their best result of the series despite losing the 13th place play-off 19-15 to Spain after a final play try by Alejandro de la Rosa, while two second-half tries by Va’a Apelu Maliko saw Samoa come from behind to beat Wales 21-7 in the 15th place play-off to pick up their first win of the weekend.

The final round of pool matches had kicked off day two with New Zealand, England, France and Australia finishing top of their respective pools to reach the Cup semi-finals, the latter only on points differential from Argentina and two-time defending champions Fiji.

England were already assured of their semi-final place after beating South Africa on Saturday, and they became the first to win all three matches in Hamilton this weekend by beating Japan 26-7 with tries by Charlton Kerr, Tom Bowen, Dan Norton and Will Hendy. The other Pool B match saw Kenya end a 14-match losing run against South Africa on the series with a mesmerising record 36-14 victory that had plenty of the dancing the Shujaa Sevens are known for around the world. South Africa simply had no answer to Kenya’s play, tries from Willy Ambaka, Geofrey Okwach, Collins Injera, Jeff Oluoch, Alvin Otieno and Vincent Onyala securing second spot behind England.

A yellow card for Andrew Coe after only 11 seconds was not what Canada wanted in the opening men’s match of day two, knowing victory – and by as many points as possible – was a must to maintain their semi-finals hopes. Pol Pla and captain Francisco Hernandez capitalised to give Spain a 14-0 lead before two tries from Canada captain Nathan Hirayama and Harry Jones secured a seven-point win and ensured a nervous wait to see what France would do in the next match against Ireland.

France opened the scoring when Veredamu hurdled his own player and raced away to score, but Jordan Conroy got outside Siega to tie the scores and it looked to be heading to half-time like that until Stephen Parez picked up a loose pass to make it 12-7. France needed to win by nine or more points to pip Canada to top spot and they left it to the dying seconds to do so, Veredamu racing away for his second of the game for a 17-7 win.

Samoa started well against Australia in Pool D, scoring first through David Afamasaga, but two tries by Josh Turner had the men in gold ahead 14-12 at half-time. The sides traded tries early in the second half but two late tries through Turner and Longbottom wrapped up the 33-19 victory and were ultimately the key to their progression to the Cup semi-finals after Argentina stunned Fiji.

Los Pumas Sevens had beaten Fiji in the pool stages in Dubai and enjoyed a dream start in this meeting, captain Santiago Alvarez, German Schulz and Matias Osadczuk giving them a 21-0 lead inside five minutes. Sevuloni Mocenacagi gave Fiji hope just before half-time and when Vilimoni Botitu raced clear it was game, until Sabato made certain of victory with his side’s fourth try. The 26-10 victory ended Fiji’s 14-match winning run in Hamilton and meant that the series champions have been ranked outside the top eight teams twice in a single season in history.

New Zealand’s passage to the semi-finals was more straightforward, Hamilton-born Mikkelson scoring at either end of the first half to become the tournament’s leading try-scorer with five. The All Blacks Sevens scored four other tries, including one from Mikkelson’s fellow co-captain Curry, for a 38-12 win. The other Pool A match saw USA power past Wales 42-0 to finish second, Naima Fuala’au scoring two of his side’s six tries as Carlin Isles and Perry Baker both crossed as they race either other to 200 tries each on the series.