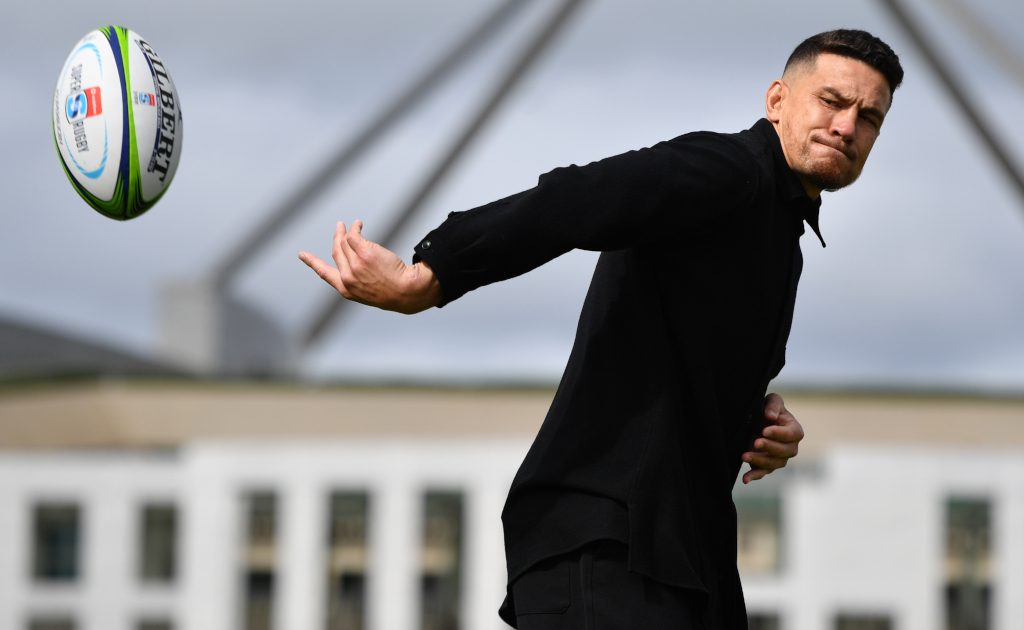 Former All Blacks centre Sonny Bill Williams has spoken about life on drugs, alcohol and womanising in his new autobiography ‘You Can’t Stop The Sun From Shining’.

In a book that he describes as “therapeutic”, Williams, who hung up his boots in March at the age of 35, enjoyed a glittering professional career that spanned 18 years.

He has now added author to his list of credits as he tells his story in an attempt to help another “young Sonny Bill”, revealing the warts and all aspects of his early career.

“I didn’t really want to do it but I’ve come to understand that I probably needed to do it,” he said from his home in Sydney.

“If I can help a young Sonny Bill or one or two young guys with the same issues of self-esteem and struggles that I had, then the book’s a success.

“I’ve got four kids and there are some things I didn’t want to delve into but I’ve tried to live my life as authentically as I can. It was a therapeutic experience.

“I wasn’t always a Muslim, I didn’t always take the better option, I was selfish, especially in my younger days living in the Sydney bubble.”

Williams had the world at his feet after making his NRL debut for Canterbury Bulldogs at the age of 18 but, homesick and lonely, he quickly began to suffer from depression and began taking drugs and alcohol to deal with the dark times.

His life was beginning to spiral out of control and things came to a head after a three-day bender he actually cut short in order to undergo what should have been routine knee surgery.

“There was a time when I woke up from an operation after being three nights on the p***,” he said.

“It was a 30-minute operation but I didn’t wake up for eight or 10 hours and my girlfriend was crying and doctor was going off at me, saying ‘you could have died with all those drugs in your system’.

“I knew what I was doing at the time but it wasn’t stopping me from doing it. My upbringing never equipped me with the tools to navigate my way through it.”

Williams’ response was to walk out on the Bulldogs in 2008 and, as his thoughts turned towards seeking refuge in Europe, he asked his manager to find a Super League club.

Warrington were thought to be keen but quickly dropped their interest when faced with potential lawsuits and Williams ended up instead switching codes with French club Toulon.

Williams recalled: “One of the Super League clubs reached out and were keen. When I said ‘yeah, I’ll come’ and that I was going to walk out on my contract, they s*** themselves.

“That’s when (Toulon coach) Tana (Umaga) rang. It was never in my mind to play rugby (union) until then.”

Williams was vilified back home, where he was dubbed ‘Money Bill’, and had to borrow a million dollars from friends to settle with the Bulldogs and secure “the circuit-breaker I needed”.

Williams had never played rugby union in his life and Toulon owner Mourad Boudjellal confessed he had never heard of him but England fly-half Jonny Wilkinson was already at the club and he was among those to help him make the transition.

“I feel like Allah had put me in that place to learn from one of the true greats,” he said.

Williams had already begun to turn to Islam and completed the conversion during his two years in France.

“I realised I needed boundaries and discipline to be a better man and I found that in my faith,” he explained.

Williams also tried his hand at boxing, initially to help pay off his debts, and, having discovered a penchant for the 15-man game, he then turned his thoughts to becoming an All Black.

He succeeded in both sports before eventually getting the chance to play in Super League, albeit in the later stages of his career.

Canadian club Toronto Wolfpack, newly-promoted from the Championship, saw Williams as the man who could put them on the map, describing him as rugby league’s Lebron James.

Williams says talking to Toronto coach Brian McDermott gave him “a new sense of purpose” but the knee injury he had carried virtually the whole of his career was beginning to take its toll and he managed just five appearances before the coronavirus pandemic forced a shutdown of the league.

When the Wolfpack opted to pull out of Super League in mid-season, Williams took up a short-term deal with Sydney Roosters and it was there he played his final game.

Toronto kept the door open for his return in 2021 but their application to rejoin Super League was rejected and Williams had by then bowed to the inevitable.

His year in Super League was not without its positives. The lockdown enabled him to spend quality time with his wife Alana and their four children in the leafy suburbs of Manchester.

“My wife talks about it today, she loved how quiet it was,” he said. “There was a 10-kilometre walk track on our doorstep. We were in lockdown for eight months so every day we would be out walking.

“It was actually a really nice time with our young family and, although it was tough on the field, I really enjoyed my brief time in the Super League, especially the camaraderie with the boys. They were willing to give it a crack.

“It was really unfortunate because I really believed in the coach. We had no reserve grade and we got no allowances or help with things like the salary cap so the odds were stacked against us.”

Williams received only a fraction of the 10 million dollars his two-year deal was thought to be worth after owner David Argyle quit the club and players are still owed money.

“We only got one or two payments and I still feel for the boys because of the financial strain it put on their households,” he said.

– ‘You Can’t Stop The Sun From Shining’ was published by Hodder & Stoughton and is available for £20 in hardback.

The All Blacks will be full of confidence of continuing their long-running winning streak against Wales at the Principality Stadium in Cardiff on October 30.

In 35 previous Tests between these countries, Wales have only been victorious on three occasions and New Zealand are currently on a 31-match winning streak.

Wales will be in a desperate mood as their last victory in this fixture was registered in 1953 and 16 of those losses were in Cardiff.