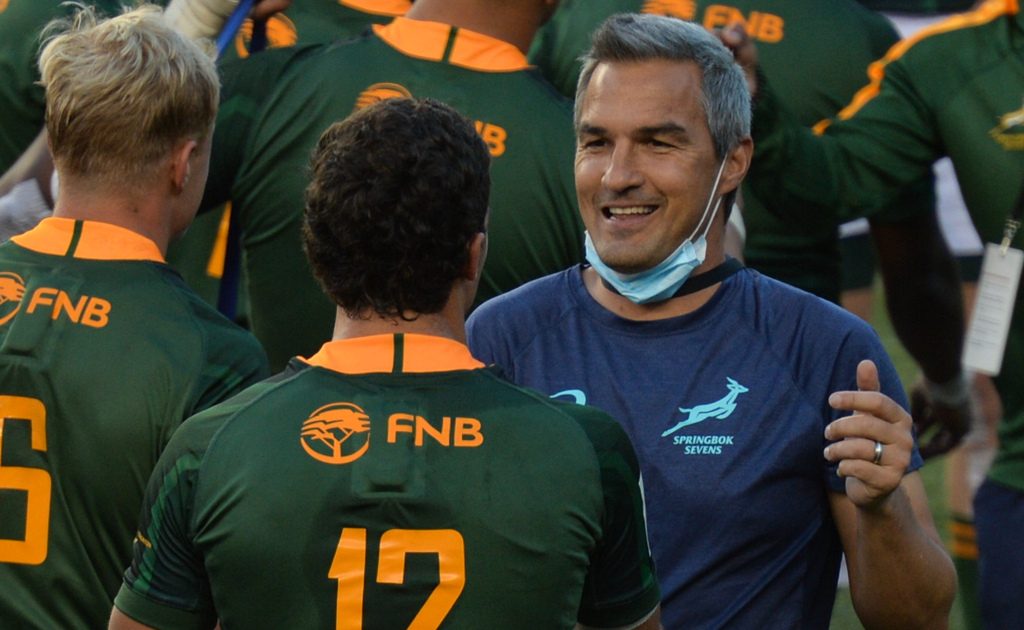 The Springbok Sevens won a third straight World Rugby Sevens Series tournament when they dazzled their way to a thrilling 42-7 win over the USA in an exhilarating Dubai Sevens Cup final on Saturday.

In doing so, the Blitzboks won their 18th consecutive World Series match, which improved their previous best run of the 2008/09 season by two wins.

Saturday was the fourth Dubai final appearance the past five years for the South Africans, during which time they also defeated Fiji (2016) and New Zealand (2017 and 2019) to be crowned kings of the desert. Furthermore, their latest triumph took South Africa’s number of tournament wins in Dubai to a record tally of eight.

What makes the team’s performance over the weekend more remarkable is that they had to make do with only 11 fit players for much of the two-day tournament, as a result of injuries to the experienced duo of Ryan Oosthuizen and Muller du Plessis. They had already travelled to Dubai without several regulars who were not considered for the trip because of injuries.

Speaking after the final, Blitzboks coach Neil Powell praised his team for delivering improved performances when it mattered on the second day.

“I’m obviously very happy with today’s performances, especially after our discussion last night when we said we had to work better in our system,” said Powell, who cautioned that his players won’t rest on their laurels.

“We wanted to look after the ball and to be better in defence and attack. Today we were clinical and it was an amazing performance by the team to beat such a strong USA team.

“We will obviously do a review of our performance and see in which areas we can improve. There’s always room for improvement and we will be hard on ourselves to make sure we are mentally and physically ready for next weekend.”

The team’s improvement was also highlighted by skipper Siviwe Soyizwapi, who finished the tournament with seven tries.

“I am really proud of the guys and the effort,” said Soyizwapi.

“We took a while to get into our stride, on defence and attack, and we showed glimpses of how we wanted to play yesterday. So, I’m really glad we could peak at the right time in the final.

“We are blessed with some great playmakers and we have a really good balance, however, there is always room for improvement. Even though the final (performance) looked so crisp, there were some defensive lapses and we let in a try.

“So, we will come back next weekend and hope to carry that (momentum) over to the next tournament.”

Soyizwapi added although the team played far away from home, they felt the South African support all the way.

“This week we couldn’t have any fans in the stadium and I know they would have loved to be here,” he said.

“But to everyone who watched us on television and getting up early to see us play, it’s really appreciated and we felt (the support) all the time over here.”

Ronald Brown, playing in only his third World Series tournament, was one of a number of standout players for the Blitzboks and he praised the hard work of the team throughout the weekend.

“Although we had the momentum, the hard work never stops,” said Brown, who scored three tries and five conversions in the final and was named the player of the final afterwards.

“It is obviously special for me so be scoring some tries and my journey just reminded me how grateful I should be, to be able to play after an absence of two years.”

Earlier on Saturday, the Springbok Sevens team displayed great attacking precision and defensive efficiency as they beat Australia by 29-5 in their quarter-final in the morning, and then booked their place in the final with a 17-7 win over Argentina.

Tries by JC Pretorius, Soyizwapi (2), Selvyn Davids and Tiaan Pretorius paved the way for a comfortable win over the Aussies, while Soyizwapi and Pretorius were again on the scoring sheet in the semi-final win over Argentina, with debutant Shilton van Wyk also dotting down his first World Series try.

In the Cup final, where the USA had no answer for the Blitzboks’ clinical play, sharp attack and strong defence, Brown was joined on the score sheet by Pretorius, Selvyn Davids and Shaun Williams.