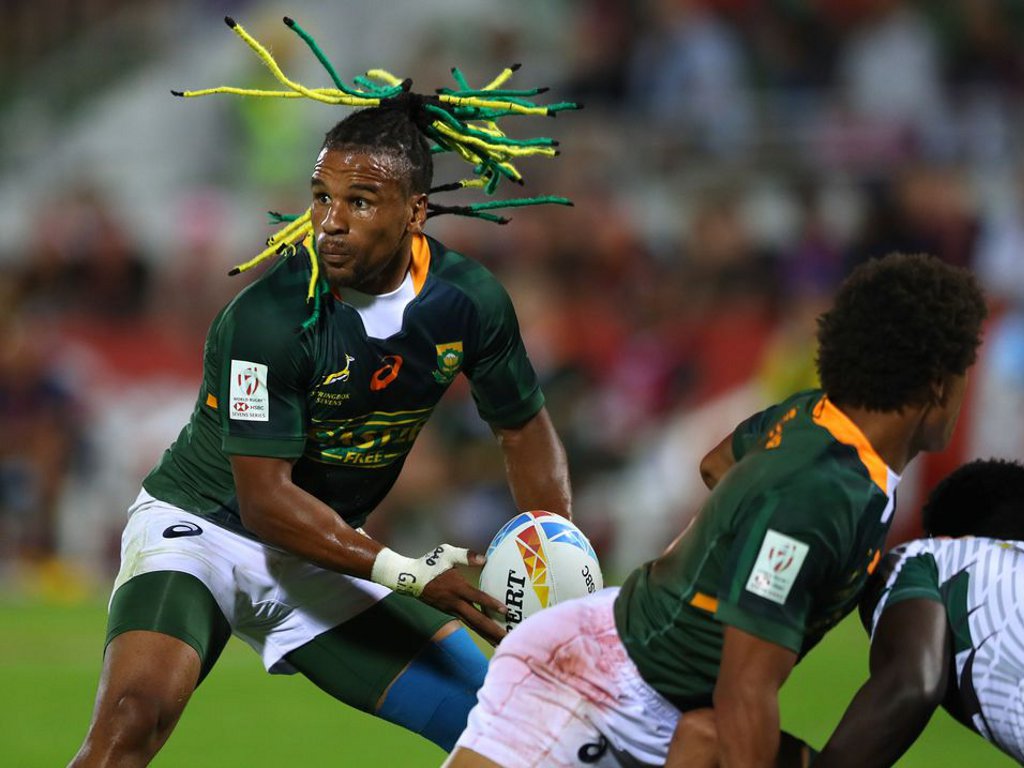 The 2019/20 series started with a bang with five of the eight men’s matches on the opening day decided by seven points or less.

Series champions Fiji held off a fast-finishing Japan 24-17, while USA beat new core team Ireland 24-19 and South Africa had to come from behind to edge Kenya 17-12 in the last match of the day at The Sevens Stadium.

Samoa and France were the other narrow winners, coming through against Canada and Argentina respectively with a successful conversion giving Les Bleus the smallest winning margin of the day, 12-10.

By contrast, defending champions New Zealand and England put Wales and Spain to the sword by the same margin – 36-7 – while Australia were the day’s top scorers with seven tries in a 43-14 defeat of Scotland.

Samoa emerged from the tunnel on their own, walking out solemnly before lining up to honour those affected by the measles epidemic in the country that has claimed more than 40 lives. It was Canada, though, who twice went in front with tries from captain Nathan Hirayama and Josiah Morra only for Samoa to make it 12-12 at half-time thanks to efforts by Paul Scanlan and Tofatu Solia. Elisapeta Alofipo then gave Samoa the lead for the first time with less than two minutes to go and they held on, grateful to see Canada knock-on only metres from their line with the clock in red.

The outcome of the other Pool B match was never in doubt after Tone Ng Shiu gave defending champions New Zealand the lead with barely a minute on the clock before Kurt Baker quickly added a brace of his own for a 17-0 half-time lead over Wales. The second half was barely 30 seconds old when Ng Shui dotted down again with Ngarohi McGarvey-Black adding his own brace to make it 36-0 before a late consolation effort for Wales from Joe Goodchild.

A first-half brace from Joe Pincus laid the foundations for Australia’s 43-14 victory over Scotland in Pool B. His double, either side of one for Scotland captain Robbie Fergusson, and another for Josh Coward meant Australia led 19-7 at half-time. Josh Turner needed just 18 seconds of the second half to score on his series debut with Jeral Skelton extending Australia’s lead.

Fans had been looking forward to seeing former sprinter Trae Williams in full flight for Australia, but may not have expected it to be in defence, his pace enabling him to make a try-saving tackle under the posts. Scotland did eventually go over after a series of scrums through Max McFarland, but Henry Hutchinson’s long run in put the finishing touch on the Australian victory.

It was then time for Ireland’s debut as a core team on the HSBC World Rugby Sevens Series, against the only team to reach every semi-final on the 2019 series in USA. Carlin Isles raced away for the opening try before series debutant Aaron O’Sullivan replied for Ireland.

The Sevens Eagles did, though, take a 12-10 lead into half-time after Danny Barrett powered over. Jordan Conroy was denied a try when referee Richard Kelly judged the final pass to be forward and it wasn’t long before Perry Baker raced away to score and Barrett added his second. Ireland did have the final say, though, with Teddy Kennedy and Jack Kelly tries making the final score 24-21.

France looked in complete control of their match with Argentina when Terry Bouhraoua turned over ball at the breakdown and raced clear for Les Bleus’ second try for a 12-0 lead with a minute to go to half-time, but Lautaro Bazan Velez gave Los Pumas Sevens hope when he stepped inside his marker and kept his balance long enough to reach the line.

Matias Osadczuk cut the deficit to two points within 90 seconds of play resuming, but that would prove to be the last score with France captain Jean Pascal Barraque’s conversion of Bouhraoua’s try proving the match-winner for his side.

Fans were expecting defending series champions Fiji to run in the tries against invitational side Japan and there were only 25 seconds on the clock when Vilimoni Botitu opened the scoring. Jerry Tuwai, the World Rugby Men’s Sevens Player of the Year 2019 in association with HSBC, then reacted fastest when the ball skewed out of a Japanese scrum to score Fiji’s second but it was 10-5 at half-time after Yoshikazu Fujita touched down. Brothers Isoa Tabu and Sevuloni Mocenacagi pushed Fiji clear but once more Japan came back at them, cutting the final deficit to seven points with tries by Fujita and Kippei Ishida.

Spain enjoyed the perfect start to their Pool D match with England, when Manuel Sainz-Trapaga was stopped short but quick recycled ball enabled captain Francisco Hernandez to score the opening try. However, that merely kicked England into gear with Dan Bibby marking his 50th series tournament with a long run in before Dan Norton and Tom Emery touched down for a 19-7 half-time lead. Norton’s 340th try on the series and further scores from captain Phil Burgess and Ollie Lindsay-Hague made it 36 unanswered points for England come the final whistle.

An all-African affair wrapped up the day’s play with South Africa scoring first through Ryan Oosthuizen, who was then bounced aside as Alvin Otieno powered down the line to the delight of the Kenyan fans.

Within a minute Kenyan fans were on their feet again as Vincent Onyala claimed a cross-field kick on the bounce one-handed and tiptoed down the touchline to make it 12-5 at half-time. However, the Blitzboks’ returning stars Rosko Specman (pictured) and Seabelo Senatla scored the tries with their dancing feet and blistering pace respectively to extend South Africa’s winning streak against Kenya to 13 matches with a 17-12 victory.

The action continues on Friday with the two remaining rounds of pool play before the knockout stages on Saturday.