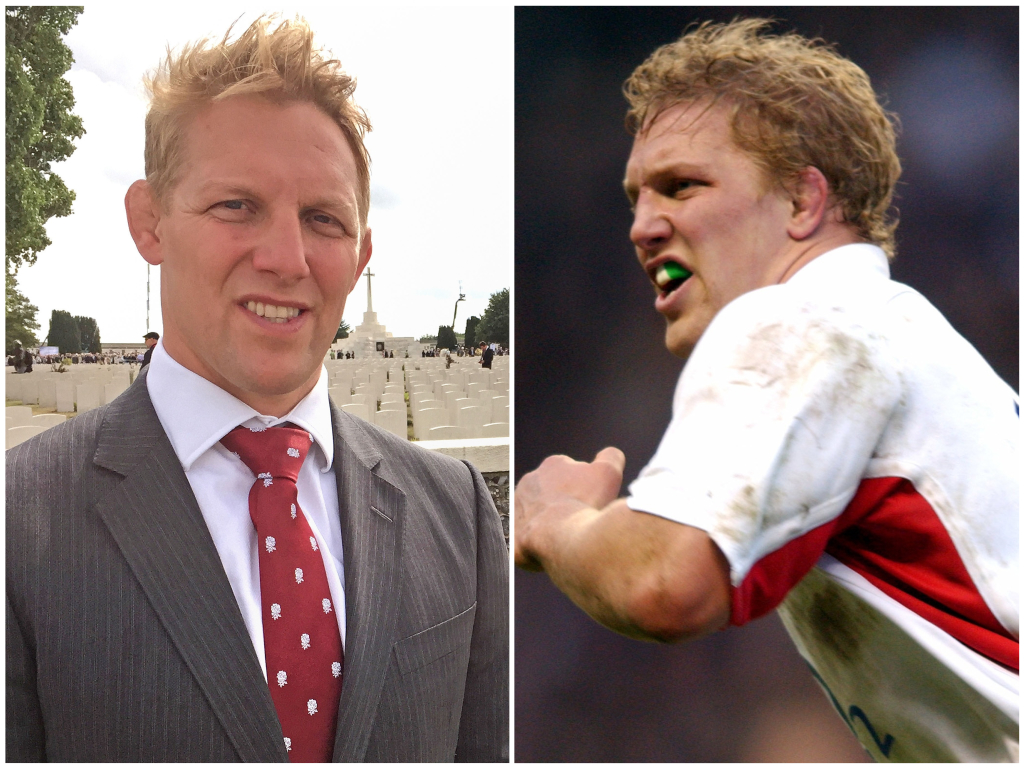 In the second of this three-part series for Planet Rugby, we speak to a trio of English rugby legends, all of whom played in a World Cup Final, to hear their memories of both the tournament and the big day. We’ll be covering the 1991, 2003 and 2007 finals and next up is Lewis Moody, a world champion in 2003.

“For me personally, the build-up year to the 2003 World Cup was something of a breakthrough season for me. We’d shown some strong form in the 2002 Autumn Internationals, won a Grand Slam and then beat both Australia and New Zealand away from home.

“On a personal level, I was challenging the established back-row of Hill, Back and Dallaglio; indeed during the Autumn series I’d ousted both Back and Dallaglio at various times and felt that I was playing some of the best rugby of my life until I busted my troublesome shoulder during the brutal South Africa game at Twickenham.”

“For three months after the tour to Australia and New Zealand, we focused on Perth and our third pool game against South Africa. A lot of niggle and cheapshots had taken place in the corresponding Twickenham fixture and some big statements had come out of the Springbok camp.

“I’d only managed a comeback of two games before we travelled, so whilst I knew I was competitive in terms of selection I felt I was slightly behind the eight-ball in terms of personal match sharpness. Nevertheless, I knew, that in all likelihood, I’d play a role in the tournament, whether as starter or replacement and was as ready as I could be, despite the paucity of rugby I’d played.

“”As luck would have it, Richard Hill pulled a hamstring in the opening win versus Georgia, a niggle that refused to clear and led to him spending a frantic four weeks trying to mend a tiny but persistent injury.

“I got a call from Phil Pask our medic on the Wednesday: ‘Lew, Hilly won’t make it’, was the simple message, confirmed later by Clive.

“The Subiaco Oval in Perth is first and foremost a huge cricket ground. As a rugby stadium it’s vast, soulless and bloody hot! I can honestly say I’ve never been as nervous for a Test as that one.

“We’d spent ages working out how to combat the heat, from dipping wrists into cold water at half-time to full on iced towels.

“More importantly, we’d also spent time working out South Africa and in particular, Louis Koen. Phil Larder was a brilliant defence analyst and he’d noted Koen would, in clearing, go back into the pocket and step before clearing. We’d discussed that the back-row would have one shot during the game for a charge-down and it fell to me deep into the second-half.

It's @englandrugby v @springboks on Saturday

“I saw the step and I absolutely accelerated to smash Louis and the ball, the charge-down falling at the feet of Will Greenwood, who used his ‘Man City’ skills to dribble and touch down.

“I hadn’t played particularly well, but I’d contributed hugely. The pool stages developed nicely for us, despite a brutal game versus Samoa.

“I was benched for this, Joe Worsley coming in to get some match sharpness taking into account Hilly’s continued absence. At full-time, it all kicked off in unlikely circumstances, with our fitness coach Dave Reddin and official Steve Walsh rather amusingly trading insults and firing water at each other in the tunnel. I would say in retrospect, Dave had made a genuine mistake over the subs whilst Walshy, despite popular opinion, was one of the best blokes on the circuit when it came to player relationships. Looking back, it was bloody funny!”

“We’d had a few days off leading up to the Wales game. During this time, Steve Thompson and I had spent some time surfing on Manly Beach. We’d had a few beers on our day off and I was messing with Thommo, threw a pretend punch in his direction, and as he avoided it his head collided with the hotel door frame to such an extent the claret flooded out of his forehead!

“However, this was his one and only day off and he wouldn’t leave the bar, so we spent this comedy scene holding ice and towels to his forehead, which stayed on all night. He turned up at training in 30 degrees the following day with a beanie hat pulled down his head, then immediately feigned a head injury to get the thing stitched up! Nobody ever found out, so Clive, if you’re reading this, sorry!

“The Wales game was one I really wanted to front up in. I’d leapfrogged Martin Corry and Joe Worsley and I wanted to stake my claim. I’d scored two tries against them in the warm-ups and although we respected them, we didn’t fear them.

“The game didn’t quite go to plan. Jonathan Thomas, a hugely under-rated flanker, put in an immense performance, almost scoring and they were giving us some serious problems with their free-flowing game. Then, enter Jason Robinson with his amazing sidestep he beat the entire Welsh defence, then to add another level of difficulty rating, passed the wrong side to Greenwood who scampered over. I say the wrong side as Mike Tindall, on the inside, would have walked in under the posts if Jason had passed the inside line, but who am I to criticise genius?!”

“I’d absolutely given my all in the Welsh game and had turned a corner in terms of my return to form. When I was fit, I knew I’d given them a selection headache in a good way and it was ironic that as I was reaching my best, I bumped into Andy Robinson, the forwards coach, on the hotel stairwell a few days before the French semi-final.

“Look mate, sorry to tell you, but Hilly is back to start for Saturday,” explained Andy. “It was a bittersweet pill to swallow; I was disappointed for myself but genuinely delighted for Richard and the team that he was fit, adding depth to the back-row options.

“The France game was strange. It hosed down with rain, we knew we just had to keep plugging away; we knew the journey we were on didn’t end here and we just owned the scoreboard, with Jonny Wilkinson peerless in kicking us to the final both with penalties and drop goals.”

“After the French game it was a quiet dressing room. It was almost the calm before the final storm. No huge celebration, just a feeling of a lot of hard work completed.

“We hardly trained much at all that week. What more was there to do in a side that had been together for something approaching four years? However, I do clearly recall one moment, when Neil Back called all of the back-rowers together for a session. He focused on process, roles and responsibilities, reminding us and himself of the core duties of each player. In retrospect, I think Neil was almost revising to himself, going through a cathartic process of learning and repeating, making sure he knew his own role and detail.

“One of my lasting memories will always be the bus ride to the stadium. I was focused on my personal space, not wanting, for once, to engage with distractions or banter. As the coach pulled off, I saw eight guys in England shirts, standing on the hotel wall in a line. I smiled at them, and waved, thinking of the great sacrifice and support they’d offered their team. At that moment, they all turned away from me, took their shorts down to ‘moon’ their backsides at me, and from left to right, in thick black marker pen, they’d written ‘GO AUSSIE’ on their asses. It was hilarious; I’d been utterly stitched up and I found it very funny and if you’re one of the guys that did that, please tweet me as I’d love to hear from you!

🤔 How much can you remember from the tournament? 🏆

“When we got to the ground, time either stood still or went so fast you couldn’t blink. It was the culmination of a massive journey and one we were not going to fail on. As we walked out to the pitch, I remember Martin Johnson turning, as he always did, in the tunnel. At this moment, he’d normally unleash a string of expletives, motivatory soundbites, garnished with a lot of phlegm and spittle to anyone near him.

“On this evening, he did none of that. He looked at us and nodded, remaining silent. His message was clear; there is nothing more to be said.

“The game passed in a flash. Every thrust we made was met with an Aussie parry. We were right down to the wire with still only a fag paper separating the teams.

“It was a strange period for me; as we started I was desperate to get out there, to make an impact, to do something different, but as the clock wound down, I became nervous, not wanting to go on, terrified I’d make a mistake, in cricketing terms getting out when we’d only got 10 runs to knock off to win with eight wickets down. My emotions were conflicting until Andy Robinson said; ‘Lew, you’re on, Hilly’s got cramp’. And then, just to reassure me; ‘And don’t give away any stupid ******* penalties!’ Cheers.

“I can honestly say that in my nine minutes I gave all. I got into the game straight away when an overthrown lineout ended up in my arm when I had Dallaglio lifted on the other arm!

“Thereafter it went well; I got a great hit on George Smith then managed to get an angle onto Mat Rogers’ clearing kick that sliced into touch just past their 22. “Zigzag” was the call as we approached the lineout, meaning phase play both ways to engineer Wilko into a drop goal position. Time stood still as I caught the lineout, Dawson and the backs smashed the ball up, Johnno crashed through their defence, until that moment when Jonny delivered the ultimate killer blow.

“We were there. Our journey had ended and we had brought the World Cup home.”

We thank Lewis for his time and we’ll resume this series next week when Nick Easter will reminisce on the 2007 campaign.