During the 2019/20 Champions Cup, we dig through the archives to highlight a hero from a previous tournament. Next up, it’s Steffon Armitage.

Steffon Armitage was born on 20 September 1985 in San Fernando, Trinidad but he grew up in the south of France where he and his brothers played for Rugby Nice Côte d’Azur Université-Racing. Armitage, who plays at openside flank or number eight, started his professional career at Saracens but made few appearances in their senior side and joined London Irish in 2006.

The move to the Exiles boosted his profile and he soon began to make his mark in his new surroundings. In 2008, Armitage was selected to represent the England Saxons and that same year he helped them win the Churchill Cup. In 2009, he was called up to the senior England squad as an injury replacement for experienced flanker Lewis Moody. Armitage made his Test debut as the starting openside flank at Twickenham in England’s Six Nations opener against Italy, which they won 36-11. That was a momentous occasion as it meant that he and his brother Delon – who played at full-back – became the first pair of brothers to play in the same England team since the Underwoods – Rory and Tony – achieved that feat during the 1995 Five Nations.

Armitage went on to play in just four more Tests between 2009 and 2011 and at the end of the 2010/2011 season he announced that he would join Top 14 outfit Toulon. That move would jeopardise his international career as the Rugby Football Union had a policy of only selecting overseas-based players in ‘exceptional’ circumstances. He thrived at Toulon with his strength, speed and breakdown work making him one of the leading players in France.

He won three European Champions Cup titles with Toulon between 2013 and 2015 and was also part of their squad when they were crowned Top 14 champions in 2014. That same year it was announced that Armitage had won the 2013/14 ERC European Player of the Year award. In 2016, he left Toulon to join Top 14 rivals Pau, despite speculation about a possible return to the Premiership which would make him eligible for England selection, and represented them until 2019.

Although there are several highlights from a glittering career, we’ve opted for Armitage’s performance during a Champions Cup pool game for Toulon in which he scored a hat-trick of tries in a 60-22 victory over Ulster at the Stade Mayol. Although Ulster gave a good account of themselves during the game’s early stages, it was always going to be difficult to beat Toulon’s international ‘galactico’ line-up and the home side were holding a 27-10 lead at half-time.

Armitage came into his own after the break and in the 57th minute he gathered a long pass from Sebastien Tillous-Borde deep inside Ulster territory before diving over for his first try, after Bryan Habana did well with a barnstorming run in the build-up. His second five-pointer came in the 65th minute when he crashed over the whitewash off the back of a line-out drive on Ulster’s five-metre line. That score brought up a half century of points but they were not done and in the 78th minute Armitage gathered a pass from Mamuka Gorgodze before beating a defender to score his third try and seal his side’s spot in the quarter-finals where they got the better of Wasps. Toulon went on to beat Leinster in the semi-finals before defeating Clermont in the final at Twickenham to clinch their third successive title and Armitage played a prominent role in their success. 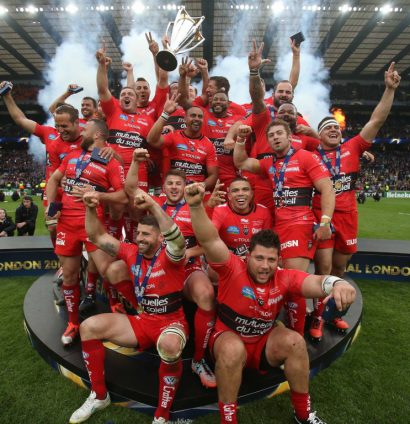