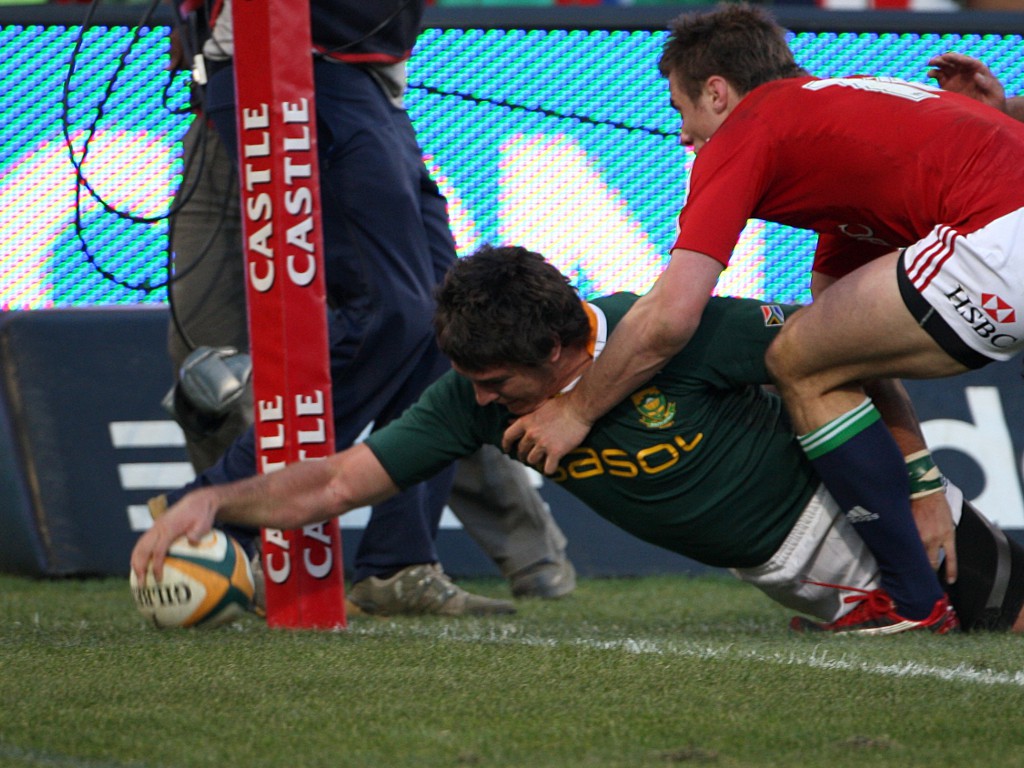 We dig through the archives to highlight a hero from years gone by. Next up, it’s Springbok and Stormers great Jaque Fourie.

Jaque Fourie was born on 4 March, 1983 in Carletonville, a town in the Gauteng province, and was regarded as one of the finest centres of his generation. A powerful presence in the midfield, Fourie was always a threat on the gainline, but he was also blessed with plenty of pace and an exceptional rugby brain. For a decade, he terrorised defences and ended his international career in 2013 having picked up 72 caps.

Fourie was an impressive athlete and it was no surprise that he made an immediate impact on the sport after making his Lions debut in 2003. Despite being just 20, an ailing South African team were in dire need of some inspiration and the centre received a call-up for the World Cup squad. The youngster was a consistent presence in the team, making a try-scoring debut against Uruguay, and would feature three more times in that competition, including in the quarter-final defeat to New Zealand.

The midfield maestro had already made his mark in the famous green jersey but he wouldn’t become a mainstay in the 13 channel until 2005 as he began to form a dynamic partnership with the legendary Jean de Villiers. Those two would be crucial leading into the ’07 World Cup, but an injury to De Villiers meant the up-and-coming Frans Steyn had to step into the breach. He did it with aplomb as the new combination thrived. Fourie, in particular, was one of their star performers as they claimed their second global title, and their first since 1995.

Over the next two years, the talented runner would take a bit more of a back seat on the international front as South African politics reared its ugly head, but Fourie made a huge impact off the bench against the British and Irish Lions. Following a 2-1 series win over the tourists, the centre moved to the Stormers and produced a number of stunning displays as the Cape Town-based outfit became a threat at Super Rugby level.

Last week we showed you his second try against the Crusaders back in 2010 for the @THESTORMERS, now it's time for his first!

Who remembers this ridiculous 50m solo effort from Jacque Fourie after being released by @PeterGrant_? pic.twitter.com/AAAJYHbkLf

That form transferred onto the Test arena and Fourie once again nailed down his place ahead of the 2011 World Cup, but another last-eight loss, this time to Australia, was the last we saw of the midfielder at his best. After joining Japanese team Kobelco Steelers, Springbok appearances became sparse, with an encounter against France in 2013 being the last of his 72 caps. He would continue playing in Asia before retiring in 2018.

After being a focal point of South Africa’s World Cup victory in 2007 at the age of just 24, Jaque Fourie should have been coming into his prime ahead of the 2009 British and Irish Lions series. And to an extent, he was. Once again, the centre had impressed at franchise level, despite the Lions’ struggles in Super Rugby, but he wasn’t favoured to start for the series against another Lions side, this time the British and Irish version.

The appointment of Peter de Villiers following Jake White’s departure and the politics which surrounded that decision probably dictated that. Just like Siya Kolisi’s elevation to captain, which was a monumental moment for South African rugby, so was the hiring of De Villiers as head coach. He became the national team’s first black boss and there were murmurings that he was under pressure to select more people of colour in his side.

Even though the quota system was scrapped in 2007, Adrian Jacobs was the man selected in the 13 channel. While he was an excellent player, the Sharks stalwart wasn’t of the quality of his competitor, leaving Fourie to reside on the bench until the second half. He was duly introduced both times at the end of the third quarter but it wasn’t for Jacobs. Instead, Jean de Villiers was the player that gave way both times, but his replacement still made a significant impact without his partner in crime on the field.

Fourie wasn’t necessarily ‘needed’ for the first Test as South Africa surged into a 26-7 lead before the Lions threatened a late victory by coming back into the contest, but in the second game, they found themselves 16-8 in arrears when he came on. Bryan Habana had touched down to reduce the deficit but the visitors were still 22-18 ahead via the boot of Stephen Jones going into the latter stages.

However, the Springboks were starting to get on top as Ian McGeechan’s men tired due to the altitude factor. They managed to work a position for Fourie out wide but he still had so much work to do. It appeared impossible to score but the midfield powerhouse sat Ronan O’Gara down on his back, fended off Mike Phillips and somehow crossed the whitewash in the corner, despite the attentions of Phillips and Tommy Bowe.

It was a remarkable finish and was unsurprisingly awarded the IRB Try of the Year due to the brilliance of Fourie and the significance it had on the contest. Although Morne Steyn kicked the winning points in the final minute to secure the series win, South Africa may have ultimately lost the three-Test encounter had their outstanding back not intervened.