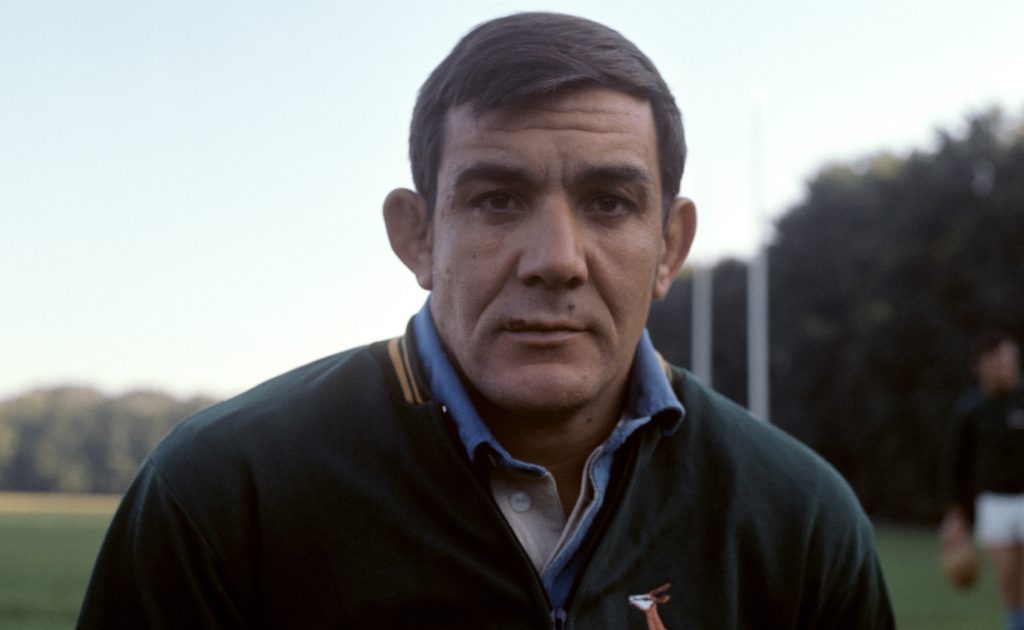 We dig through the archives to highlight a hero from years gone by. Next up, it’s Springboks and Northern Transvaal legend Frik du Preez.

Frederik Christoffel Hendrik du Preez was born on 28 November, 1935 in Rustenburg, a city in the North West province of South Africa and is regarded as one of the greatest players to have ever picked up a rugby ball. An incredibly talented individual, the forward could do it all. Renowned first and foremost for being an immense athlete, who was adept at either lock or flanker, Du Preez was a superb lineout technician, despite not being particularly tall.

At 6ft 2in, the second-row was not exceptionally tall but he was a dominant presence at the set-piece and that was because of his ability to rise high from a standing start. His athleticism made him a huge threat in the loose and Du Preez was quite simply as quick as a back, regularly making dents in the opposition rearguard with his blistering pace.

His talents did not stop there, however, and the forward could also kick goals – similar to Australian great John Eales. The Wallabies lock was nicknamed ‘nobody’ because ‘nobody’s perfect,’ but Du Preez’s talents were similar to that of the two-time World Cup winner. In 1969, 11 years after his debut for Northern Transvaal (now known as the Blue Bulls), came the second-row’s greatest moment for the province, garnering a full-house by scoring a try, conversion, drop-goal and penalty.

That wasn’t in any old game either as his efforts saw them claim the Currie Cup for the second successive season by overcoming Western Province 28-13. In total, he would play for 13 years at Northern Transvaal, but it was with the Springboks where he obviously gained wider recognition.

Du Preez made his debut for South Africa in 1961 and featured 87 times – 38 of those Tests – for the national team. It was a record he held for many years after retiring in 1971 at the age of 35. He was well and truly one of the greats of the sport and was named as the best South African player of the century following a distinguished career in the green shirt.

Frik du Preez only scored one Test try but it was an effort which encapsulated all that was great about the talented forward. Going into the British and Irish Lions series in 1968, the second-row should have arguably been on the wane, especially when it came to his athletic prowess, but nothing could be further from the truth.

Du Preez, despite being 32, was at the top of his game and he showed why in the opening encounter against the Lions. The touring side had some genuine greats in their ranks, including Irish duo Mike Gibson and Willie John McBride, and Welsh legend Gareth Edwards, but they were powerless to stop the South African lock in full flight.

After his team won a lineout 40 metres out from their own line, they peeled around the front and sent the lock galloping clear down the left touchline. There wasn’t much space to work with but Du Preez showed incredible balance, pace and footwork to evade the attentions of the Lions defenders and cross the whitewash out wide.

It was a memorable try and one which helped the Springboks to a crucial victory as they emerged 25-20 triumphant in the opening match of the Test series. Inspired by that win they would go on to claim three of the four internationals – the other ending in a draw – as they dominated the tourists during those two months.

Following Du Preez’s retirement, they would not defeat the Lions again until 1980 as the northern hemisphere outfit got their revenge in 1974 with the all-conquering ‘Invincibles,’ who won the series 3-0. The lock was a unique player that, in many ways, was ahead of his time and his sheer brilliance was missed when he departed the rugby scene after a victory over Australia in 1971.