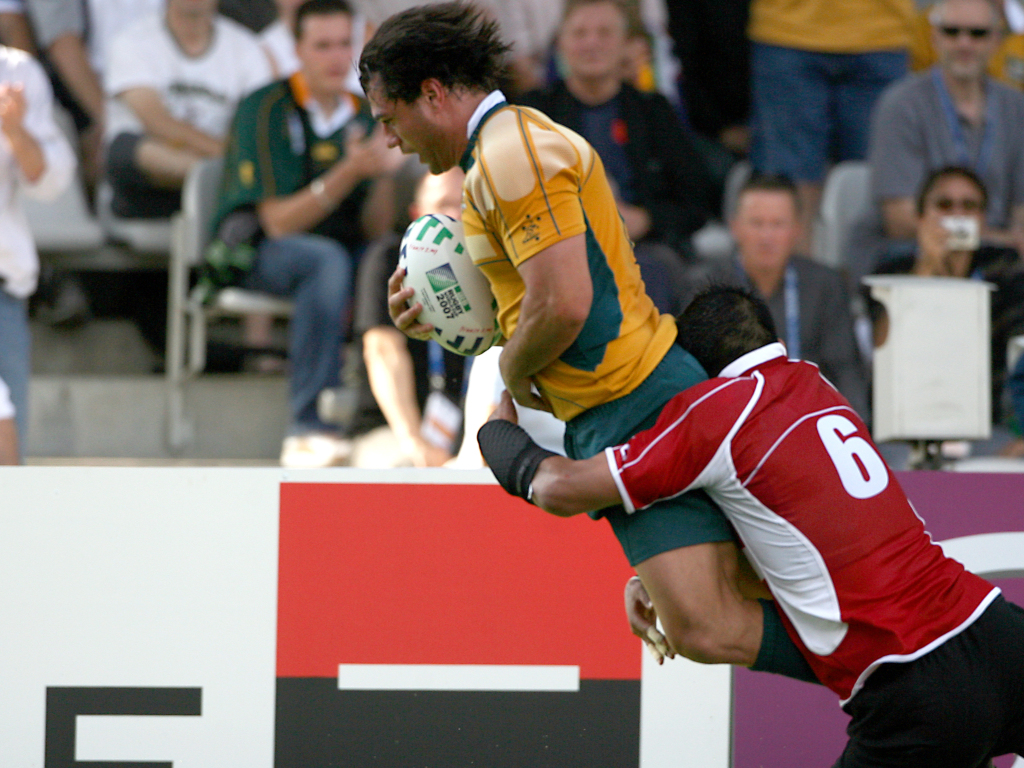 With rugby taking an indefinite break, we dig through the archives to highlight a hero that has lit up the sport in previous years. Next up, George Smith.

Born in Manly, Sydney on July 14 1980 to an Australian father and a Tongan mother, George Smith started playing rugby at U7 level for Manly Roos/Warringah Roos, before moving on to play most of his junior career with the Manly Vikings. He also played rugby league between the ages of nine and 13 for North Curl Curl Knights but the 15-man code was his preference and he spent most of his junior career playing a year above his age group in the Sydney junior rugby competition.

During his junior club career he was selected for many representative teams, including Manly, Sydney, Northern Zone, New South Wales, and Australian U16s. Playing as an openside flanker, Smith also had a successful schoolboy career, initially at Balgowlah Boys High School and then at Cromer High School, where he was part of the team which won the Australian Schools Championship. He also represented the Australian Schoolboys team in 1998.

Brumbies head coach Eddie Jones signed him in 1999 and he made his Super Rugby debut as a 19-year-old in the Canberra-based outfit’s home victory against the Sharks in 2000. Smith soon established himself in the Brumbies’ starting line-up and later that year he scored a try in their narrow defeat to the Crusaders in the Super Rugby final. His outstanding form earned him a call up to the Wallabies squad and he made his Test debut against France in Paris in 2000.

Renowned for his breakdown expertise and great vision, Smith became a fixture in the Brumbies team and played a leading role in their Super Rugby title wins in 2001 and 2004. He is widely regarded as one of the greatest Wallabies in history and is arguably the Brumbies’ best ever player. After his Super Rugby debut, he won the Brumbies’ Player of the Year award on eight occasions, until he left them in 2010 to join Toulon. Smith, who played in any position in the back-row, was also crowned Australian Super 14 Player of the Year four years in a row between 2006 and 2009.

After his spell at Toulon, he played for Stade Francais but rejoined the Brumbies in 2013 and won the club’s Player of the Year award on two more occasions before leaving them again to join Lyon. He also had stints at Wasps, Suntory Sugoliath, Queensland Reds and Bristol Bears before retiring in 2019.

At Test level, he played for the Wallabies until 2009 and was one of their stars during the 2003 Rugby World Cup in Australia. He played in all seven of his country’s matches at the global showpiece where they finished as runners-up to England. Smith twice won the prestigious John Eales Medal for best Australian player before returning to the Test arena against the British and Irish Lions in 2013 and eventually made 111 Test appearances.

With such a glittering career, there are several outstanding moments to choose from but while he made his mark against the world’s best in several matches for the Brumbies and Wallabies, it’s a try against Japan at the 2007 World Cup in Japan which stands out for us. It was Australia’s first match at that tournament and they laid down an early marker as they ran in 12 tries in an easy 91-3 victory against their hapless opponents at the Stade de Gerland in Lyon.

The Wallabies were cruising as they had already scored 10 of those 12 five-pointers when Japan launched an attack from inside their 22 with outside centre Koji Taira running onto an offload from his fly-half Kousei Ono in the 64th minute. Taira made little progress as he was brought to ground five metres beyond his 22-metre line by a bone-crunching hit from Smith, who had shone throughout the game with his excellent defence and pilfering skills at the breakdown.

And true to form, Smith was up off the ground in a flash and robbed Ono of the ball before setting off towards his opponents’ try-line. There was still work to do but the Wallaby tearaway outsprinted the cover defence before diving over in the right-hand corner despite a desperate tackle from Japan flanker Yasunori Watanabe. Although there was little at stake in this match, that effort was a good illustration of Smith at his best and you can watch a replay of the try from the 28-second mark in the video below.