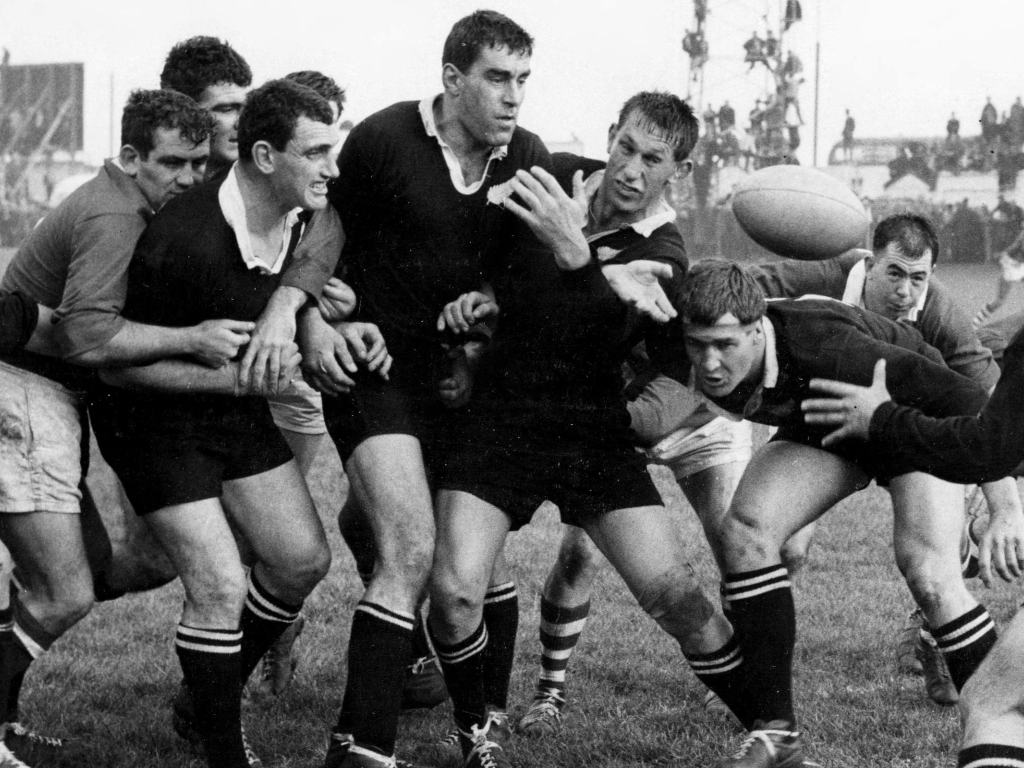 We dig through the archives to highlight a hero from years gone by. Next up, it’s one of the greatest players of all time, Sir Colin Meads.

Sir Colin Earl Meads was born on 3 June, 1936 in Cambridge, a town in Waikato, and is an icon of New Zealand rugby having starred for the national team for 14 years between 1957 and ’71. Despite some of the incredible players that have graced the famous black shirt, Meads is often regarded as the greatest of them all and was duly named Player of the Century in 1999.

Meads was powerful and unyielding but was also incredibly athletic, leading him to become a ubiquitous presence on the field. He had outstanding stamina while his skill levels allowed him to achieve the rare feat for a forward by kicking a drop-goal. Lock was his preferred position but he also featured at flanker and number eight, as well as on the wing on one occasion (where he scored a try).

His adaptability and uncompromising approach to the sport meant he quickly became well regarded, both at home and abroad, and helped the All Blacks dominate international rugby in the 1960s. That quickly turned into legendary status and he was inducted into the World Rugby Hall of Fame in 2014.

At club level, Meads was a stalwart at King Country, featuring for 18 years at the Waikato-based outfit and playing 361 first class matches. That was a record he held for 42 years before hooker Keven Mealamu broke the barrier. It displayed the regard the second-row was held in but also the forward’s durability to play week after week.

In total, Meads earned 55 caps for New Zealand before his international career ended following their series defeat to the British and Irish Lions in 1971. It was a sad finish to a wonderful 14 years but he managed to continue for King Country until ’73 before he eventually hung up his boots.

Post-playing, he spent time as a selector for the national side and was also All Blacks manager during the 1995 Rugby World Cup, but remained a humble sheep farmer until selling his land in 2007. Two years later, Meads accepted a knighthood, a redesignation of the New Zealand Companion of Merit he received in ’01.

In 2016, he was diagnosed with pancreatic cancer and lost his year-long battle on August 20, 2017 as the game mourned and remembered one of the greats of rugby union.

Colin Meads is often the figure many discuss when harking back to the so-called golden era of the amateur game as the New Zealander often epitomised the sport’s spirit. His skill was always evident but it was his uncompromising approach combined with his self-effacing attitude off the pitch which gained many admirers.

The second-row was the enforcer and an inspiration on the field, becoming a focal point of the All Blacks pack throughout the 1960s, and he would never take a backwards step. That approach saw him become a hero for those in his native New Zealand, with the supporters always comfortable in the knowledge that Meads would give everything – and sometimes more – to the cause.

There were some controversial moments, including in 1967 when he became just the second All Black to be sent off in a Test match. Irish referee Kevin Kelleher sent him to the sidelines for dangerous play as he recklessly attempted to kick a loose ball, only to catch a Scottish player in the process.

Meads also ended the career of Australian great Ken Catchpole when he wrenched the leg of the scrum-half while he was pinned down, tearing his hamstring and rupturing his groin muscles, but he pleaded his innocence and years later was invited to a dinner in the Wallaby legend’s honour.

Those incidents give you an idea of how unyielding the lock was on the pitch but his ‘rugby moment’ came in 1970 as New Zealand toured South Africa and played a match against Eastern Transvaal. It was a typically brutal encounter which was enlivened early on when the visitors scored through Bryan Williams, an effort which arguably led to even more skulduggery on the pitch.

The hosts were enraged by the try and Meads became the victim when he was kicked as he protected Earle Kirton, who had dived on a loose ball. Those in black insisted it was intentional and it resulted in a broken arm for their enforcer in the pack, albeit they did not know at the time. The second-row carried on, with a local doctor stating that the injury was probably just a pinched nerve, and duly played the final 76 minutes.

X-rays later confirmed the break, showing that Meads had effectively played the majority of the match with one arm. It went down in All Blacks folklore and displayed the type of unwavering character the great man was. As he said following the match: “At least we won the bloody game.”