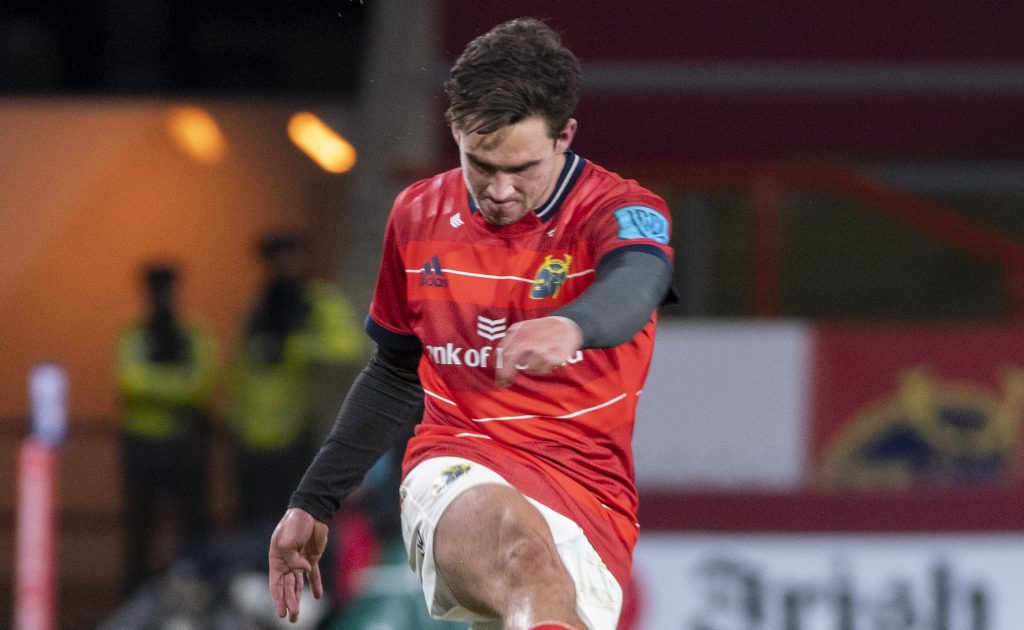 The all-important conversion was slotted by Joey Carbery, who just a few minutes earlier had been charged down by Player of the Match Jack Carty for the concession of seven points.

However, on the fifth anniversary of Anthony Foley’s death, Munster pulled out a smash-and-grab victory to remain unbeaten after four rounds.

The first interprovincial clash of the season was a typically bruising affair, Chris Cloete’s late try sending Munster in at the break with a 7-6 lead.

Eager to bounce back to winning ways, a free-flowing first Connacht attack brought Mack Hansen in off the blindside wing and set up Carty’s opening penalty.

The Connacht fly-half doubled the lead in the ninth minute, with Conor Oliver and Gavin Coombes soon trading turnover penalties.

Hansen had a try ruled out for a forward pass, but Bundee Aki was clearly revelling in the physicality of a niggly interprovincial tie.

Busy flanker Cloete increased his influence at the breakdown, but the Munster line-out continued to misfire.

Sam Arnold’s sin-binning for a swinging-arm tackle opened the door for the hosts, though, and they edged ahead on the stroke of half-time.

Cloete grounded the ball after Tadhg Beirne had hacked through from a pinpoint cross-field kick from Rory Scannell. Carbery converted, but Connacht felt aggrieved as Beirne appeared offside on the replays.

Early in the second half, Cloete almost sniffed out a second try before Carbery knocked over his first penalty.

Crucially, the Westerners hit back swiftly, with Boyle lunging over from a tap penalty. Carty’s conversion hit the post.

Carbery nudged Munster back in front on the hour mark but it was his dithering on a clearance kick that allowed Carty to swoop for Connacht’s try.

Try as they might, Connacht’s overworked defence could not hold out from relentless Munster pressure. Barron drove in low to score and Carbery nailed the kick.

Cardiff get the better of Sharks

In the other late game, Rhys Priestland steered Cardiff to a hard-fought 23-17 victory as his side survived a second-half onslaught from the Sharks.

The hosts led 17-0 at one stage but were hanging on grimly at the death and 13 points from the boot of the impressive Priestland proved just enough.

Thomas du Toit and Marnus Potgieter scored tries for the Sharks, while Curwin Bosch converted one and Boeta Chamberlain added a penalty and a conversion.

Leinster’s impressive forward pack claimed all seven tries for themselves in a runaway 50-15 win over the Scarlets at the RDS.

Two slick scores from Johnny McNicholl and debutant Tomas Lezana kept Scarlets in the contest at 29-15, but Leinster powered home with closing tries from replacements Cian Healy and Dan Sheehan (2).

A late penalty try had given the hosts a 22-8 half-time lead, and Caelan Doris claimed the bonus point to add to earlier efforts from Ronan Kelleher and the excellent Andrew Porter.

Sam Costelow, who struggled last Sunday against Munster, slotted over an early penalty for the visitors. In a pacy start, Johnny Sexton levelled in the seventh minute.

A scrum penalty in their own 22 got the Scarlets out of trouble, before Ioan Nicholas was the beneficiary of Johnny Williams’ brilliant offload out of a tackle and the supporting McNicholl scorched over from the edge of the Leinster 22.

That was the highlight of the first half for the Scarlets, their 8-3 lead lasting until the 23rd minute when Kelleher drove over from a line-out maul.

A terrific break from deep by returning Lion Jack Conan ignited the Leinster attack again, and a few minutes later Porter plunged over from a ruck. Sexton converted for a 15-8 lead.

The Leinster pack dominated approaching the interval, some late scrum pressure earning a penalty try to open up a 14-point gap.

Hooker Kelleher was the creator for the bonus-point score, showing great speed and strength to tidy up a loose ball and break past three defenders before sending Doris crashing over. The conversion followed from Ciaran Frawley.

Some excellent hands – and a neat step inside and offload from McNicholl – set up a timely reply from Argentinian flanker Lezana. Replacement Dan Jones converted to leave it 29-15.

The penalties continued to hurt Scarlets, though, as Leinster got back in range for Healy to finish off a series of pick-and-drives.

Fellow replacement Ross Byrne converted and also added the extras to Sheehan’s well-taken closing brace. The Scarlets finished the game with 13 men having lost McNicholl to the sin-bin and Lezana to injury.

Edinburgh cling on to edge out Bulls

Edinburgh clung on against a late Bulls rally to claim their second victory of the United Rugby Championship at the DAM Health Stadium, winning 17-10.

It was a grim tussle but both teams showed plenty of character to make it a compelling contest.

Edinburgh snatched a seventh-minute lead when the first slick passage of play in the match led to Damien Hoyland setting up a Henry Immelman try with a well-weighted grubber.

The Bulls pulled three points back when Chris Smith bisected the posts after Stuart McInally was penalised for holding onto the ball on the deck.

Jaco van der Walt had missed the tricky conversion of Immelman’s early try, but he was on the money with three penalties in quick succession to make it 14-3 to the hosts at the break.

However, the Edinburgh number 10 then picked up a painful-looking shoulder injury whilst making a tackle during the last play of the first half and had to be replaced by James Johnstone, with James Lang moving inwards from centre to the fly-half slot.

Edinburgh twice had the Bulls in bother early in the second period, first after a searching kick from Mark Bennett, and then after a scything break from Johnstone, but could not make it count on the scoreboard.

A powerful Edinburgh scrum, immediately after the introduction of WP Nel at tighthead prop, earned a penalty for the home side, but Lang hit the post with his shot at goal.

With 10 minutes to go, Bulls captain Marcell Coetzee muscled in for the try, and Morne Steyn’s conversion made it 14-10, which was just a bit too close for comfort for the hosts.

But they showed good composure to get back in the strike zone and then earn a ruck penalty.

With Lang now off injured as well, Bennett stepped forward to take the shot at goal and made no mistake.

It looked like Madosh Tambwe had scored a try which would have set up a conversion to square it with five minutes to play, but referee Ben Whitehouse chalked it off for a double movement after a trip to the TMO.

Earlier, the Ospreys survived a stunning Benetton fightback to emerge with a 29-26 victory from their match in Treviso.

Having initially failed to build on a dominant start and fallen 26-7 behind, Benetton produced second-half tries from Rhyno Smith, Monty Ioane and Tommaso Menoncello to pull level.

However, the Ospreys, whose challenge was hampered by the loss of Luke Morgan and debutant Alex Cuthbert to the sin-bin, snatched victory late on thanks to a Stephen Myler penalty.

The visitors had looked almost out of sight after Max Nagy and Ethan Roots touched down before half-time and Rhys Webb crossed twice after the break.

Benetton, who had taken an early lead through Gianmarco Lucchesi, battled admirably but fell just short of a famous comeback victory.

Glasgow win at Zebre to rack up third straight victory

In the day’s first game, Glasgow made it three United Rugby Championship wins on the bounce with a 17-6 victory over Zebre Parma in Italy.

Having lost their season opener at Ulster, the Warriors have now chalked up consecutive wins against the Sharks, Lions and Zebre ahead of next weekend’s home clash with Leinster – their final match before the international break.

First-half tries from Lewis Bean and Sione Tuipulotu put the visitors in control, while a Duncan Weir penalty was all either side could muster after the break.

Zebre – limited to six points from the boot of Carlo Canna – did show some threatening glimpses but have now not won a game in any competition since February and their record against Glasgow stands at 18 defeats and no victories.