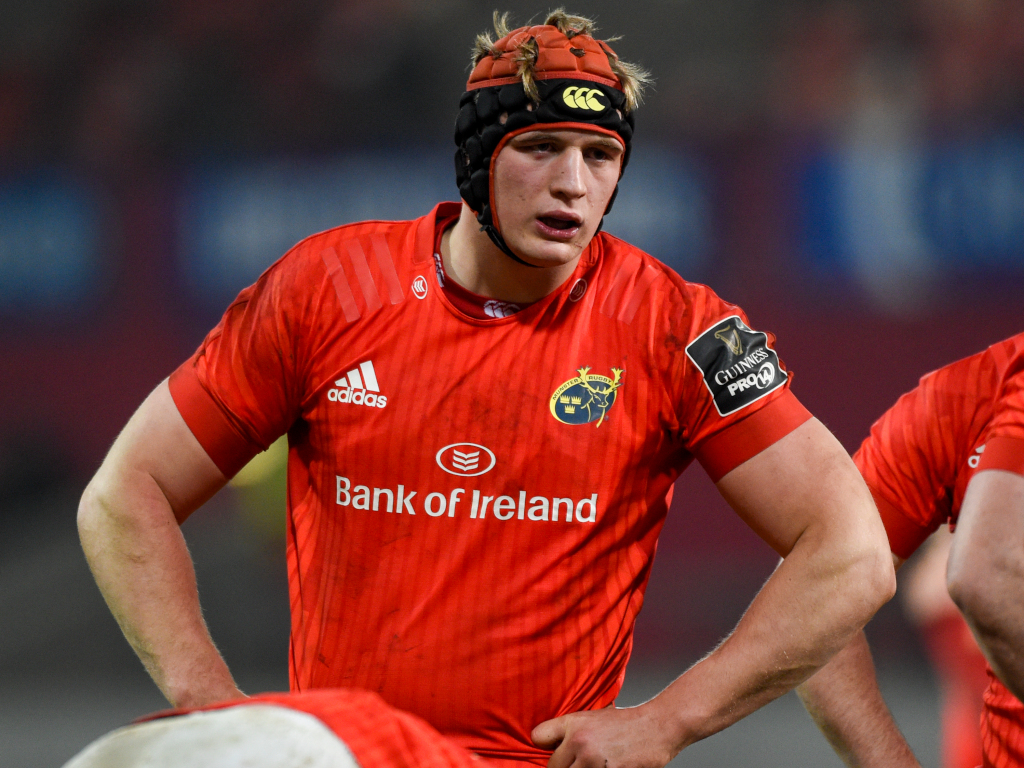 Munster remain unbeaten in the PRO14 after Gavin Coombes touched down three times to help them to a dominant 38-22 triumph over the Ospreys on Sunday.

The Skibbereen youngster starred as Johann van Graan’s men bagged a bonus-point to go eight points clear at the top of Conference B.

After grabbing a second try during Morgan’s sin-bin period, Coombes completed his hat-trick in the 53rd minute. It was five tries to three in the end, with Ospreys forcing a late penalty try to add to Dewi Lake’s maul score.

Ospreys bounced back from Bradley Davies’ departure with a shoulder injury to seize a sixth-minute lead. Bright spark Mat Protheroe brilliantly sliced through on a kick return to send Morgan over out wide.

Stephen Myler’s pinpoint conversion made it the full seven points, but Munster were level by the quarter hour mark. Coombes, who bagged a brace recently against Cardiff Blues, took three defenders with him over the line, handing JJ Hanrahan a simple conversion.

It got even better for the hosts in the 18th minute, full-back Haley tidying up a loose ball and gliding past a couple of defenders to score just to the right of the posts.

A Tiaan Thomas-Wheeler interception led to Ospreys threatening again from the searing pace of Protheroe and Morgan, only for Damian de Allende to win a breakdown penalty.

There is the hat-trick! 🏉

Gavin Coombes grinning from ear to ear after he powered his way over the line for @Munsterrugby’s fifth try of the game!

Where do @ospreys go from here?

Better play from the visitors’ pack led to Myler closing the gap to 17-10 in the 33rd minute. However, Munster hooker O’Byrne, who had given up that penalty, responded with a try from a surging lineout drive that contained backs and forwards.

Healy converted for a 14-point margin at the break and, with Ospreys winger Morgan having been binned for a deliberate knock-on, Munster took further advantage when Craig Casey wriggled up close to the line and Coombes burrowed over from the ruck.

Munster made up for Jean Kleyn’s near miss by crossing again through a quick tap by player-of-the-match Coombes. Healy added the extras for a 38-10 scoreline.

Ospreys rallied to dominate the final quarter, drawing encouragement from replacement hooker Lake’s well-finished 64th-minute try. Their scrum then earned a penalty try after an increasingly sloppy Munster had lost captain Jack O’Donoghue to the bin, but the Irish province ultimately went away with a comfortable win.