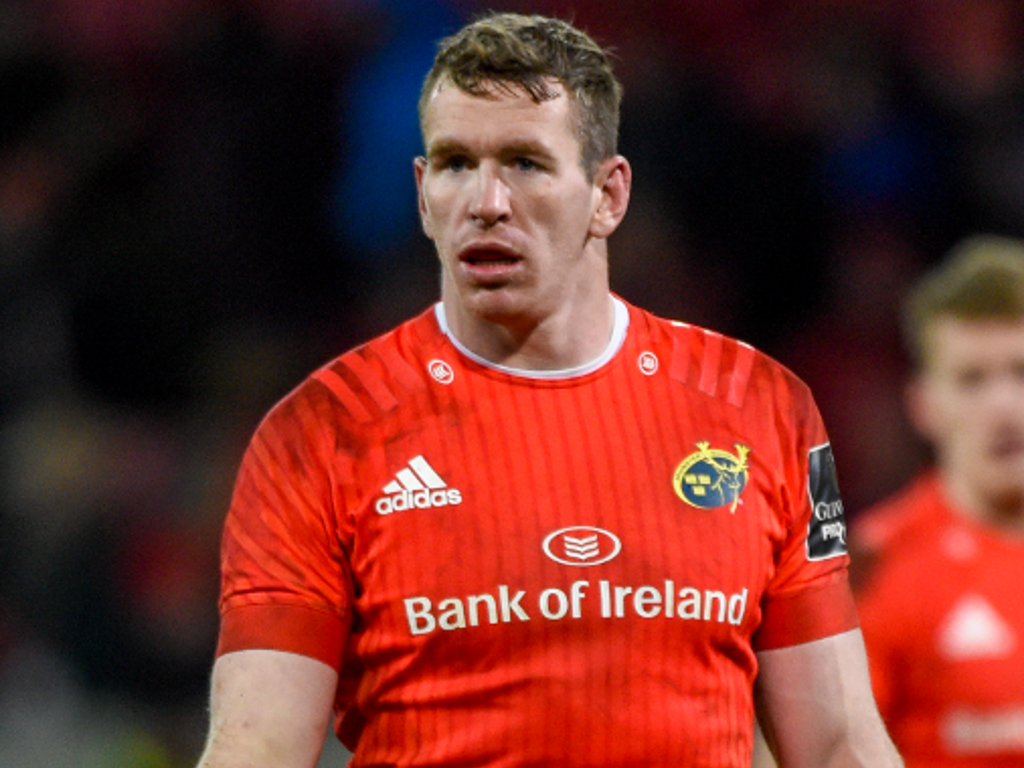 Leigh Halfpenny kicked nine penalties to break Scarlets’ record for most penalties in a match, surpassing the previous mark of eight set by Stephen Jones and Byron Hayward.

Halfpenny’s efforts appeared to have condemned Munster to defeat, particularly when Peter O’Mahony was red carded in the 68th minute after picking up two yellows.

However, the flanker’s dismissal proved the catalyst for a remarkable reversal of fortunes.

With respective scrum-halves Gareth Davies and Craig Casey intent on kicking the ball at every available opportunity, the opening 15 minutes were easily forgotten with neither side threatening the try-line.

Scarlets got on the board when Halfpenny made no mistake with two straightforward penalties in quick succession to give his side a 6-0 lead.

Munster suffered a further blow when their skipper O’Mahony was sin-binned for charging into a ruck and taking a man out off the ball, and in the flanker’s absence Halfpenny kicked another penalty.

O’Mahony was still absent when Munster picked up the first try of the game – a strong run from Andrew Conway paving the way for a try for O’Donoghue.

Hanrahan converted before a fourth penalty from Halfpenny gave Scarlets a 12-7 interval lead.

After the restart an error from Hanrahan gifted the Welsh region a platform. The fly-half sent a touchline kick into the dead ball area for Scarlets to capitalise with another Halfpenny penalty.

Hanrahan atoned for his error by kicking a penalty but Halfpenny again responded with three further penalties as Scarlets became increasingly dominant.

Munster rallied to score their second try when Farrell finished off a period of pressure to force his way over but there was a sting in the tale as O’Mahony was sent off for again charging into the ruck as Farrell placed the ball over the line.

Halfpenny kicked the resulting and record-breaking penalty from half-way before Healy responded with one to keep Munster in it.

Remarkably they then scored another 10 points, with O’Byrne finishing off a driving line-out which Healy converted before the replacement outside-half held his nerve to fire over the match-winner.

Carty finished with 13 points and another of the province’s Ireland internationals, Quinn Roux, also touched down as the westerners defeated Scottish opposition for the first time since April 2017.

Glasgow’s pressure eventually paid off just before half-time, Adam Hastings slipping Nick Grigg through to make it 7-3 in response to Carty’s early penalty.

A run of tries from Aki, Roux, Huw Jones and Aki again produced some exciting exchanges. Tommy Seymour’s 70th-minute score made it 25-24, but Connacht held on thanks to a Carty kick with four minutes remaining.

A bruising first half began with Oli Kebble being penalised for side-entry, allowing Carty to open the scoring in the second minute.

Carty and his opposite number Hastings missed penalty attempts after 11 and 20 minutes respectively. The Scotland fly-half’s shot came after second row Roux was sin-binned for a no-arms tackle.

Glasgow were looking the more dangerous side, with co-captain Fraser Brown and Jones both gaining good ground, and Aki and Brown both showed their breakdown prowess to win penalties.

Connacht smothered a Glasgow drive in the 32nd minute but they did concede just before the short whistle. Armed with a penalty advantage, Hastings produced a half-break and short pass to send centre Grigg over.

We get our @PRO14Official campaign off to a winning start in a hugely physical game.

The increasingly-influential Hastings converted and then added a penalty, five minutes after the restart. Connacht hit back with Aki’s try-scoring burst to the line, which rewarded some fine build-up play from Tom Farrell. Carty converted to make it 10-10.

Upping the pace further, Farrell, Alex Wootton and Peter Sullivan stretched the Glasgow defence before Roux crashed in under the posts past Seymour’s tackle.

Glasgow quickly got back level at 17-17 when Jones expertly weaved through a midfield gap for Hastings to convert. Carty restored Connacht’s lead three minutes later when he punished a Scott Cummings infringement.

Even better followed for the 200 home fans permitted to be at the Sportsground, with John Porch sparking a brilliant break from deep and Wootton’s dabbed kick through gleefully dotted down by Aki. Carty missed the touchline conversion.

With an eight-point deficit to overcome, a sweeping Warriors attack ended with Grigg putting Seymour over on the right. Hastings again added the extras, only for Carty’s 40-metre penalty to end Connacht’s run of six successive defeats to Glasgow.

In the late game, Mat Protheroe scored a double on his first start for Ospreys as the Welsh side opened their PRO14 season with a dominant 25-10 victory in Edinburgh.

The Swansea-born wing, a summer signing from Bristol, showed his pace and class as he crossed in each half at BT Murrayfield.

The hosts had taken an early lead through a penalty try but Nicky Smith went over for the visitors with both sides down to 14 men.

Ospreys dealt with the torrential rain far better than Richard Cockerill’s side, who spilled high balls on a number of occasions as they suffered a fourth consecutive defeat.

Edinburgh’s delayed finale to last season ended with a disappointing semi-final defeat by Ulster and European Challenge Cup loss to Bordeaux and they delivered a flat performance, especially in an insipid second-half display.

Edinburgh were missing the injured Blair Kinghorn, Bill Mata, and Duhan van der Merwe along with the self-isolating Jamie Ritchie.

And they suffered the first of a series of blows to their pack when flanker Luke Crosbie limped off inside three minutes, although they had a more than able replacement in Hamish Watson.

The hosts opened the scoring in the 13th minute after a great break forward from Jamie Farndale, who then passed to Chris Dean on the left wing. The centre’s pass inside was heading for midfield partner Mark Bennett when Ospreys skipper Justin Tipuric deliberately knocked on, only succeeding in getting a yellow card on top of the penalty try.

However, Grant Gilchrist levelled up the teams when he was sent to the sin bin for tipping an opponent and the hosts were effectively down to 13 men when Smith touched down as the Ospreys pack drove over the line as Magnus Bradbury received treatment.

Andrew Davidson came on in the second change to Edinburgh’s back row and Stephen Myler soon kicked a penalty to add to his conversion.

The visitors went further ahead after some direct running. Kieran Williams was still in his own half when he embarked on a piercing run before his dummy opened up space for Protheroe, who was over the line after a clever side-step.

Myler’s kicking took Ospreys 13 points ahead before Jaco Van Der Walt cut the deficit with a penalty in the final second of the half after earlier missing two attempts.

Edinburgh offered absolutely nothing going forward after the break.

The game went further beyond them 15 minutes into the half when Protheroe peeled off behind a line-out maul and Rhys Webb spotted his run to send him over in the left corner.

The Welsh side only won two league games last season but they were completely in control and the only down side for new head coach Toby Booth was that they never turned their possession into a bonus-point try.