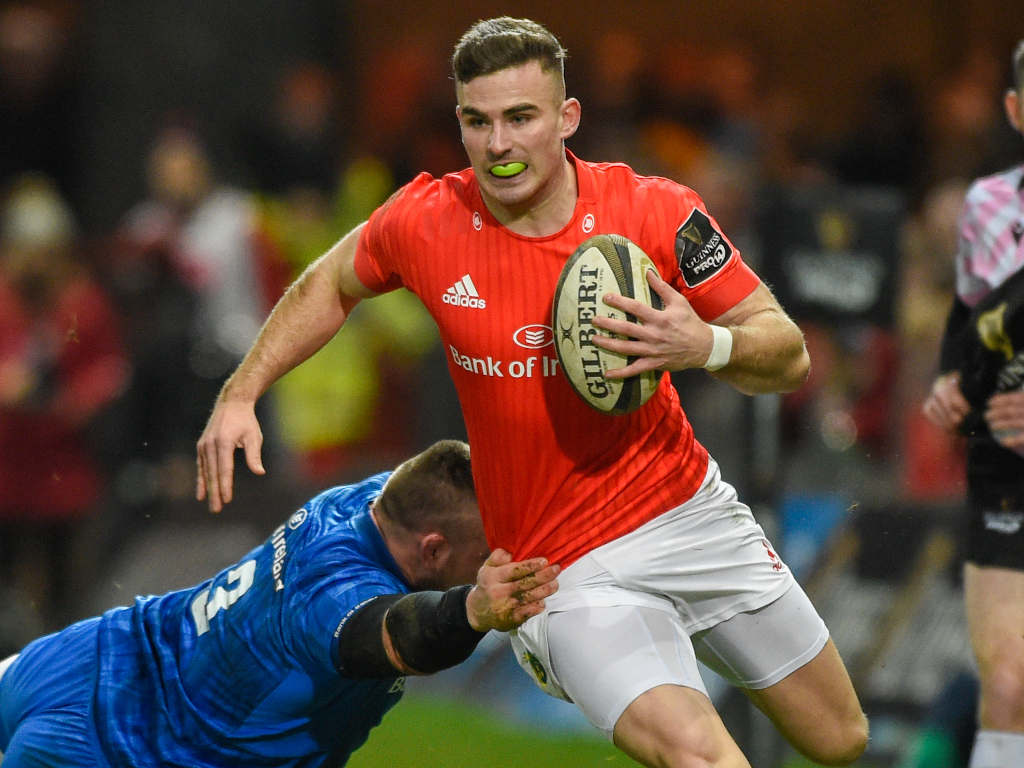 There’s three games in the PRO14 on Sunday with Munster facing a pressure match against Connacht as they look to seal a place in the play-offs.

Munster know a win over Connacht in Dublin will seal their place in the PRO14 semi-finals, with this the first ever meeting of the two Irish teams at the Aviva Stadium/Lansdowne Road.

The Munster backline is unchanged this weekend with five players coming into the pack.

Jeremy Loughman, John Ryan, Fineen Wycherley, Tadhg Beirne and Chris Cloete are all drafted into the side. Beirne is in line to make his first appearance since sustaining an ankle fracture away to Saracens last December.

Damian de Allende and Chris Farrell pair up in the centres for the second time with Conor Murray and JJ Hanrahan in the half-backs.

Loughman, Niall Scannell and Ryan pack down in the front-row with Wycherley and Beirne starting in the engine room together for the first time.

Kevin O’Byrne, Liam O’Connor, Jack O’Donoghue and Jack O’Sullivan are named among the replacements and set to make their first appearances since the return to rugby. O’Donoghue sustained a concussion at training last week but has completed the return to play protocols.

Meanwhile, the Connacht management team have, as expected, named a new-look side for this fixture.

There are 14 changes from the side that impressively saw off Ulster last weekend, with head coach Andy Friend keen to give game-time to more players after a long absence due to Covid-19.

Among those starting is Sammy Arnold who makes his first Connacht appearance at outside centre. The Irish international arrived in the summer and his debut comes against the side he joined from.

There’s also an inaugural start for powerful number eight Abraham Papali’i. The New Zealander was signed from the Bay of Plenty and he forms a back-row with Conor Oliver and Eoghan Masterson who is the only player retained from last week.

Quinn Roux captains the side having recovered from injury to take his place in the second-row alongside Niall Murray, with Paddy McAllister, Shane Delahunt and Dominic Robertson-McCoy completing the pack.

Sunday’s half-back pairing consists of Caolin Blade and Conor Fitzgerald, while Arnold will be partnered in the centre by Tom Daly.

The experienced Tiernan O’Halloran and Matt Healy are included in the back three, while there’s also a first appearance for Colm de Buitléar since January 2019. The wing played four times during 2018/19 while in the Connacht Academy, but hasn’t featured since suffering a serious Achilles injury in the 2019/20 pre-season.

John Mulvihill has made wholesale changes as Cardiff Blues sign off from the 2019/20 season with a Welsh derby against the Ospreys at Rodney Parade.

With the Arms Park being utilised as part of the Dragon’s Heart Hospital in Cardiff, they host the PRO14 clash 16 miles east in Newport on Sunday.

Following last weekend’s defeat to the Scarlets, Mulvihill has made a total of 13 changes to the starting XV, as he continues to give the squad game-time as they build towards 2020/21.

Only Josh Turnbull and Josh Adams remain in the starting line-up while Josh Navidi returns and captains the team from number eight.

Matthew Morgan, who made an impact from the bench last week, starts at full-back, with in-form Josh Adams and Jason Harries on the wings.

Up front, Dmitri Arhip packs down against his former club, alongside Liam Belcher and Corey Domachowski. Josh Turnbull is partnered by Seb Davies, and Shane Lewis-Hughes and James Botham complete a dynamic back-row.

New signing Sam Moore could make his debut from the bench, while Ioan Davies is also in line for just his second PRO14 appearance.

Meanwhile, Ospreys head coach Toby Booth has named his team for what is also the final game of their season.

Justin Tipuric will lead the side for the 50th time in his career and links up with Olly Cracknell and Gareth Evans in the back-row. Bradley Davies comes into the starting line-up alongside Alun Wyn Jones, with Adam Beard and Morgan Morris providing the second and back-row cover off the bench.

Up front Rhodri Jones returns to the starting line-up after a lengthy injury lay-off this season, joining Scott Otten and Tom Botha. The loosehead and tighthead pairing of Nicky Smith and Nicky Thomas are named on the bench alongside up and coming hooker Dewi Lake.

An unchanged half-back combination sees Rhys Webb and Stephen Myler line up alongside each other once again. New signing Mat Protheroe will make his Osprey debut off the bench with Reuben Morgan-Williams covering scrum-half.

Young Dewi Cross joins the backline alongside Dan Evans at full-back and Luke Morgan with Tiaan Thomas-Wheeler and Owen Watkin forming the centre partnership. Last week’s player of the match Keiran Williams supplies the boost for the backline off the bench.

Can @BenettonRugby exact revenge in both sides' last game of the #GuinnessPRO14 season tomorrow?

Zebre will be eager to build on last week’s 17-13 victory over their Italian neighbours when they host Benetton at Stadio Lanfranchi di Parma.

Despite that win, there are numerous alterations to Zebre’s run-on side. In the backline, captain Giulio Bisegni moves to the right wing from outside centre with Federico Mori coming into the starting line-up to wear the number 13 jersey.

Elsewhere, Carlo Canna shifts to inside centre while Antonio Rizzi joins Marcello Violi to form a half-back combination. Jacopo Trulla comes in at full-back and Mattia Bellini is on the left wing and they replace Michelangelo Biondelli and Jamie Elliott respectively.

In the forwards, Renato Giammarioli takes over from Giovanni Licata while Cristian Stoian replaces David Sisi in the second-row. The final change is in the front-row where Matteo Nocera starts at tighthead prop in place of Eduardo Bello.

Edoardo Padovani starts at full-back where he replaces Jayden Hayward and he’s joined in the back three by Ratuva Tavuyara and Monty Ioane, who come in for Luca Sperandio and Leonardo Sarto respectively.

In midfield, Ignacio Brex and Tommaso Benvenuti take over from Joaquin Riera and Luca Morisi while Tommaso Allan and Luca Petrozzi are preferred to Paolo Garbisi and Dewaldt Duvenage as the half-back pairing. Allan will also captain the side.

In the pack, Marco Barbini, Marco Lazzaroni and Sebastian Negri are the new back-row combination with Barbini packing down at number eight and the latter two on the flanks. They replace Braam Steyn, Michele Lamaro and Alberto Sgarbi while Riccardo Favretto and Niccolò Cannone come in for Federico Ruzza and the retired Alessandro Zanni.

In the front-row, Simone Ferrari starts at tighthead prop where he takes over from Filippo Alongi while Gianmarco Lucchesi and Cherif Traore replace Tomas Baravalle and Ivan Nemer at hooker and loosehead prop respectively.