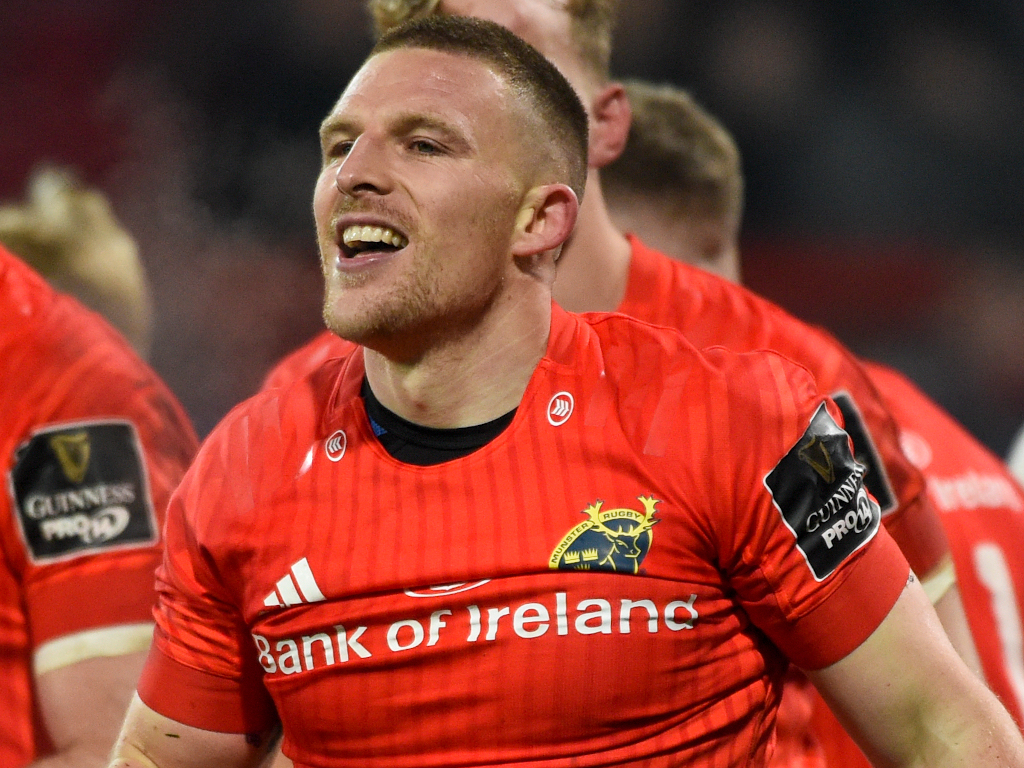 Andrew Conway scored a brace of tries as Munster took advantage of two first-half red cards for opponents Connacht to reach the PRO14 semi-finals thanks to a 49-12 bonus-point win.

Recovering from two yellows of their own, Munster went on to dominate the second half as they climbed back above Scarlets into second place in Conference B.

Tries from man-of-the-match Tadhg Beirne, Conway (2) and James Cronin dwarfed a Jonny Murphy effort as Johann van Graan’s men set up a last-four clash with old foes Leinster back at the Aviva Stadium next Friday.

Profiting from Connacht’s poor discipline, Munster cemented their early dominance after flanker Oliver was guilty of going off his feet. Cloete touched down from a textbook lineout maul and JJ Hanrahan scored the first of his five conversions.

Connacht’s seven-man pack coughed up a 15th-minute penalty try from a five-metre scrum, with Munster tighthead John Ryan to the fore. It was a nightmare start but the westerners gradually bounced back.

New Zealander Papali’i managed to steal possession from CJ Stander and also carried strongly but that good work was undone when he tackled Murray with what referee Frank Murphy adjudged was a shoulder to the head, in consultation with TMO Olly Hodges.

Following the double dismissal – and amid some inconsistent breakdown calls from Murphy – Loughman provided a smart finish after 36 minutes, bouncing off a couple of tackles with Hanrahan converting.

Yellow cards for Munster captain Peter O’Mahony and Beirne near their own line evened up the numbers at 13 each, late on, and Connacht grabbed a well-taken try from Aki, who powered in between a couple of front rowers.

Yet, the concession of three tries in a five-minute spell had Connacht heads dropping.

Beirne picked up a 49th-minute bonus point when running a clever line inside Aki.

Hanrahan converted and also added the extras to a quick-fire Conway brace with the best of the afternoon’s tries seeing Beirne brilliantly link with Chris Farrell and Damian De Allende before supporting winger Conway finished off the long-range break.

Conway soon took his haul to four tries in two games when chasing down a Hanrahan kick in the right corner.

Your Guinness Player of the Match is – @jtov10 💪

Wales wing Josh Adams scored one try and made another for Jason Harries in front of his watching international head coach Wayne Pivac.

Dan Evans and Luke Morgan scored the Ospreys’ tries, but they were let down by their discipline and Blues fly-half Jason Tovey took advantage with a perfect record of two conversions and five penalties.

This game was being played at Rodney Parade rather than the Blues’ usual Cardiff Arms Park home which is still being used as a medical facility to counter the Covid-19 pandemic.

Stephen Myler rewarded the Ospreys – whose defeat means they finish bottom of Conference A in the PRO14 – for a promising start with an early penalty and it was the visitors who had more of the ball in the opening 10 minutes.

Tovey and Myler exchanged penalties before the Blues grabbed the first try.

Max Llewellyn and Adams were the architects with breaks before the ball was spread back left. Blues captain Josh Navidi was involved and it was left to Harries who finished acrobatically in the corner despite being under little pressure. Tovey nailed the touchline conversion.

With nothing of significance riding on the encounter both sides were guilty of poor kicking out of hand and a series of big hits failed to hide the game’s lack of quality.

Llewellyn limped off with an ankle injury, but that failed to stop the Blues from making it two tries in fine fashion. This time Harries was creator as he came off his right wing and kicked through.

The Ospreys should have done better defensively and Adams pounced to score in exactly the same corner as Harries had for his seventh try in eight Blues games. Tovey’s kick was again perfect.

Justin Tipuric started the away response. He collected a kick ahead and although he was stopped, the Ospreys had a huge overlap when the ball was recycled.

Evans was the scorer and Myler kicked the goal.

Tovey responded with two quick penalties when the second half resumed to put the Blues 10 points up as the Ospreys got on the wrong side of referee Adam Jones’ whistle.

The Blues penalties kept coming and Tovey’s sixth kick of the afternoon kept up his pinpoint performance from the tee.

Jones had seen enough of the Ospreys’ poor discipline and yellow carded Olly Cracknell as his team were lucky to escape Adams having what would have been his second try ruled out.

Both teams unloaded their benches for the final quarter, but yet another Tovey penalty finished the game before Morgan grabbed a late consolation after being set up by Tipuric and Alun Wyn Jones.

In the late game in Italy, Benetton exacted revenge over Zebre for last week’s home defeat as they won 16-9 at Stadio Lanfranchi di Parma.

Two tries from impressive wing Monty Ioane and a penalty apiece from Tommaso Allan and Ian Keatley saw the visitors to the four points.

Zebre’s response was three Antonio Rizzi penalties as they finished the season in sixth place in Conference A, four points ahead of Ospreys. Benetton ended the campaign in fifth in Conference B as they kept their noses just in front of Cardiff Blues and basement outfit the Kings.