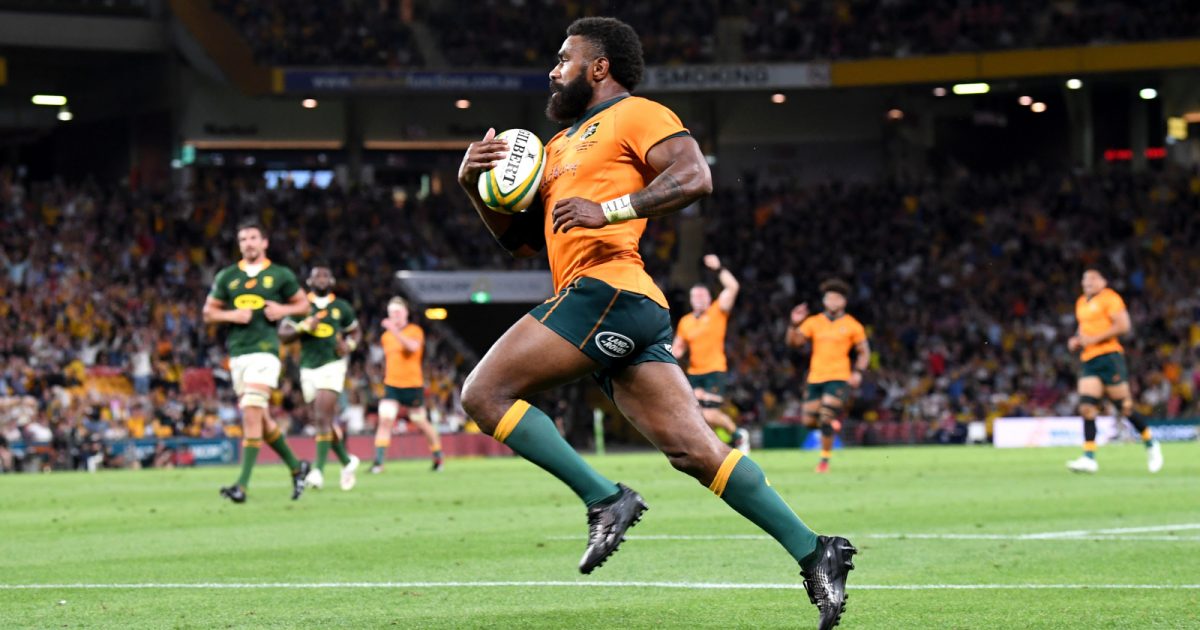 Argentina head coach Michael Cheika has heaped praise on dangerous Wallabies wing Marika Koroibete ahead of their clash in Mendoza.

Cheika’s relationship with Koroibete goes back to 2016 when the then-Australia coach coaxed the wing to move from rugby league to union.

The speedster’s reputation has grown tremendously in the 15-man game since, and he is now viewed as one of the most potent wingers in the world.

Despite being the opposition coach, Cheika claimed he loves watching Koroibete play and that he is “one of the best”.

“I know the opposition coach isn’t supposed to say this but he is a bloody legend,” Cheika told the Herald.

“He puts his heart out on the field, the effort he makes. He knows it won’t mean anything on game day – we have a good relationship obviously – but you have to acknowledge the best, and he is one of the best.

“We will have our hands full taking him on but we will be doing our damndest, we have some pretty handy wingers as well. I love watching him play, maybe just not this Saturday.”

Cheika commended Australia for their performance against England despite losing the series 2-1 and praised the job his opposite number Dave Rennie is doing with the Wallabies.

“I personally thought they got a bit of a hard time after the series,” Cheika said.

“I thought they played quite well. England aren’t mugs, that’s for sure. And they got their first victory against England in many years, with a man down [in the first Test in Perth]. So it is not easy to do, what they did in that series. I think they are really improving.

“Coach Rennie is doing a good job with them, and I think they’ll come here – and they probably won’t say this – but I think they’ll be fairly confident, off the back of what they did against England and the competitiveness they had in that series.”

Cheika referenced some of the players he used to coach at the Wallabies and praised them for how well they are still playing.

“They are still doing the business,” Cheika said. “Michael Hooper, James Slipper, I won’t call Allan old but Ala’alatoa as well. They’re doing really good jobs. Nic White is playing the best footy of his career, if you ask me.”

The tactician has also seen development in fly-half Quade Cooper’s game, singling out “game management” as a key difference.

“I don’t know about as a bloke but as a player, from what I have seen on the outside, he just looks like he has his game management sorted,” Cheika added.

“That will be what coach Rennie will want him to do, so he is doing the job that his coach wants, and he has always been a quality player. There’s no doubt about that. It doesn’t surprise me.

”But I think the young fella [Lolesio] is a good player too, he’s been playing well and he has plenty of experience now. He is going to be a good player for Australia in the future, and he is already is one now.“

Whilst Los Pumas showed growth when they claimed an impressive series win against Scotland in July, Cheika insists their focus is still on the bigger picture.

“We didn’t think too much about winning the series or anything like that,” he added.

“It was good, and it was good for Argentina, don’t get me wrong. But we are undergoing a pretty big revolution. We are working on a few things around the way we are playing footy, and what’s important for the team and the way they’re preparing.

“There is always going to be adaptation knowing that our end goal is going to be able to perform as best as we possibly can at the World Cup. But also lift our quality in the short term as well.”