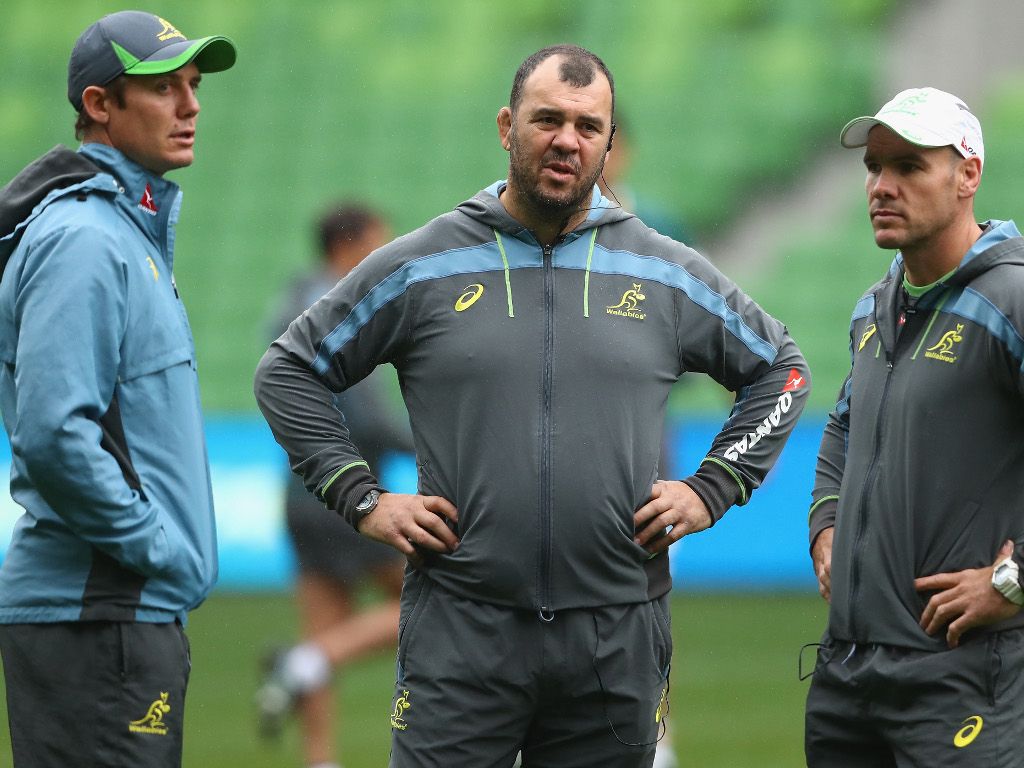 Wallabies head coach Michael Cheika admitted that although a change in attitude is needed in his coaching set-up, he is still backing his assistant coaches.

Cheika revealed that a shake-up to his backroom staff – after a poor season – will not be part of his pitch to the Rugby Australia board on Friday.

Ahead of the Wallabies’ end-of-year tour, and in the wake of a 3-6 season so far, Cheika will front the board in Sydney to present his plans for turning things around heading into the World Cup year.

There have been suggestions that while Cheika retains the support of the Rugby AU board, changes to his coaching staff may be on the table – including a report of one left-field theory involving attack coach Stephen Larkham and defence coach Nathan Grey swapping roles.

Cheika shot down that idea, however, and said while the coaching staff understood they have to make changes in the way they run the Wallabies program to be at their best more consistently, he has full trust and faith in all of his assistants.

“Swap them (Grey and Larkham)? No, I wouldn’t do that,” Cheika told Rugby Australia’s official website.

“I don’t that would be a smart strategy at this point. It’s about using the experience you’ve had, like you do in life (with) positive and negative experiences, to make the corrections you need to do a better job.

“Trust is the foundation of any successful team. When I lack trust at the top, I am not really setting a good example for anyone underneath.

“Why do I believe in them (the assistants)? Because I have seen them do it. I have seen them perform on a day-to-day basis, all the staff and players. We have to be more consistent as coaches in delivering the correct message to get the change we want to get.”

Cheika said his presentation to the Rugby AU board will be providing “insight” to give the power-brokers a clear understanding of what has happened this year, and where he plans to take the team next year.

“Insight into the direction that we want to take the team, whether it be around what’s the selection strategy, what’s the age profiling, what’s the tactical slant, maybe some leadership issues, things like that,” he said.

“The really important thing for these types of meetings, from chairman through CEO, coach, captain, everyone is in one mind. That may not have always been the case in our joint (Rugby Australia), and we’re trying the best we can to get that to happen.

“You can have a break out win here and there but without that type of alignment we can’t have consistent success, and that’s what we are striving to have.

“How do we as coaches need to change to make sure that sticks? Because we have been inconsistent. The biggest thing is around what technique do we use to become consistent?”

Removing the Wallabies’ mental blockages, and an occasionally admitted “fear of failure” this year, appears to be Cheika’s point of focus, given he believes there have been glimpses of the team’s A-game; namely the first half in Sydney and Auckland Bledisloes, the Ireland series, the second half of Salta.

But apart from working on psychology, unofficial player feedback this year is that there has also been, at times, confusion due to too many coaching voices in the strategy and tactics pipeline.

Cheika appeared to agree that is an issue that will be addressed, admitting he’d empowered his assistants to lead in some areas.

There is a strong chance heading into a World Cup year, however, Cheika will take back full control that would be made clear to the Rugby AU board.

“You always go through waves of that,” Cheika said.

“Sometimes you leave room for a bit more autonomy and then you pull back, and then you go again, because you are trying to grow people as well, to be honest, inside a team.

“One thing there is no doubt of is all of us coaches are aware of things we have to do to improve, and by having that awareness, both self-awareness and awareness as a team, that’s activating us to make the changes.

“Also when I do need to come in and say this is what we are doing, I want everyone to follow this cue, we work well together in that way. The boys know that I give them room on some things and other times we need to tighten up and take this direction and this direction only.“

Asked if the results of the Rugby Championship had forced the changes he was talking about, Cheika said four losses had provided the space – however painful – to confront their issues.

“Maybe the game on the Gold Coast, we could have finished that winning, it was close, right?” Cheika said.

“Would we be talking about the same things? Yes, we should be. But would we have been? Maybe not.

“So you have to look at exactly what is happening with the team and the big thing is delivering consistency. I really believe that, and what techniques we can use as coaches, to get the best football we play for longer and longer and longer. In a relatively inexperienced young group, consistency is always an issue.”