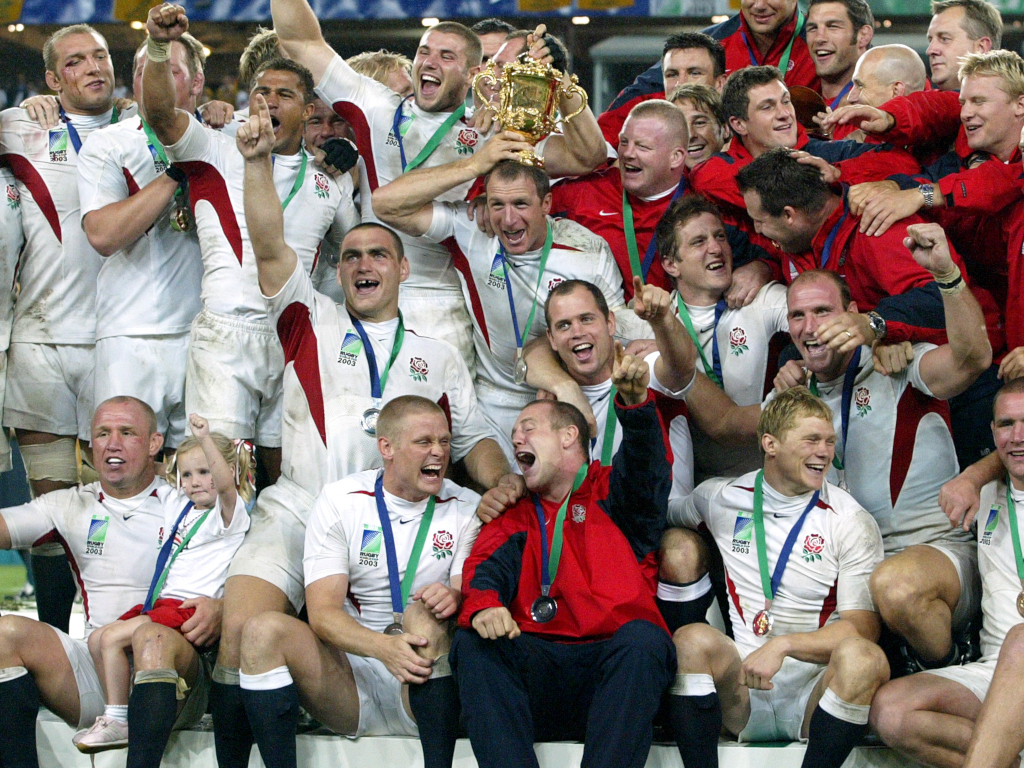 It was English rugby’s finest hour, the culmination of head coach Clive Woodward’s plan, as they defeated hosts Australia to become world champions.

The dream became reality on a night of spine-tingling tension in Sydney on November 22, 2003 and this feature delves into the what happened before, during and after the tournament.

Woodward took charge of England in 1997 and, while he quickly began to mould the squad his way, the early years saw painful Grand Slam slips as Wales, Scotland and Ireland all tripped England up at the final hurdle in successive seasons from 1999 to 2001, while South Africa fly-half Jannie de Beer drop-kicked them out of the ’99 World Cup. Undeterred, though, Woodward continued building at pace and, by the time of England’s next World Cup tilt, his squad was thriving. Led by Leicester lock Martin Johnson, eight of Woodward’s 30-strong group for Australia had more than 50 caps, with no player aged younger than 24.

Preparations were meticulous and successful, with England winning the 2003 Six Nations in Grand Slam fashion by crushing Ireland 42-6 in Dublin before famously defeating New Zealand in Wellington, despite being reduced to 13 players when Neil Back and Lawrence Dallaglio were sin-binned, then they ran Australia ragged in Melbourne. By the time Woodward’s men left Heathrow, they were flying in every sense.

Both sides were looking for their 5th consecutive win of the 2003 campaign knowing any victory would give them their first Grand Slam of the 'Six Nations'!

Arrival in Australia and pool stage

England were based on Australia’s west coast in Perth, which would be the venue for their opening two group games against Georgia and South Africa, before Samoa awaited them in Melbourne and minnows Uruguay in Brisbane. Georgia were duly dispatched 84-6, with England scoring 12 tries, but flanker Richard Hill suffered a hamstring injury that would sideline him until the semi-finals.

England knew if they beat South Africa it could open a more straightforward path to the knockout phase, and they did not disappoint, with fly-half Jonny Wilkinson kicking 20 points in a 25-6 win. Samoa provided a few scares before England prevailed 35-22, then Josh Lewsey scored five tries during a 111-13 demolition of Uruguay. England topped their group with 19 points from a possible 20, setting up a quarter-final appointment with Wales.

Wales, coached by New Zealander Steve Hansen, showed rich attacking capability when they scored four tries against the All Blacks in losing a thrilling pool game 53-37. England were clear favourites to reach the semi-finals, but Wales left them a bewildered bunch in Brisbane after a brilliant Stephen Jones try before Colin Charvis’ touchdown established a 10-3 lead at the break.

Woodward had to assess his tactical options after things started to unravel, and Mike Catt’s arrival off the bench began to tilt matters England’s way. Although Martyn Williams added a third try for Wales, England centre Will Greenwood’s touchdown and 23 points from the ultra-reliable Wilkinson calmed the nerves and finally quelled a memorable Welsh effort.

Wilkinson was again to the fore as England swept past semi-final opponents France, but Australia served notice of their claims to the Webb Ellis Cup by knocking out New Zealand. It set up a final between the host nation and tournament favourites, and it did not disappoint, requiring extra-time and a dramatic conclusion before matters were settled. The Wallabies made a flying start through wing Lote Tuqiri’s sixth-minute try, but England then took charge, building a nine-point lead by the break through a Jason Robinson touchdown and three Wilkinson penalties. England, though, incurred the wrath of South African referee Andre Watson in the set-pieces, and Wallabies kicker Elton Flatley landed three penalties to make it 14-14 by full-time.

Then came the extras, a further penalty each by Wilkinson and Flatley before, 26 seconds from time, Wilkinson struck. “This is the one, it’s coming back for Jonny Wilkinson,” roared BBC rugby correspondent Ian Robertson in his unforgettable radio commentary. “He drops for World Cup glory – it’s up, it’s over, he’s done it!” Wilkinson’s drop-goal secured England a first world title as Woodward and his players made it mission accomplished after stopping a nation 10,500 miles away back home.

🎙: “This is the one, it’s coming back for Jonny Wilkinson…”

“He drops for World Cup glory… IT’S UP, IT’S OVER, HE’S DONE IT!”pic.twitter.com/KRYhhoqvNU

The England players celebrated long and hard before arriving back home to remarkable scenes at Heathrow, and then a victory parade through central London. Recognition in the New Year Honours followed, headed by a knighthood for Woodward, while there was also a celebration match at Twickenham between England and the New Zealand Barbarians. Woodward left the Rugby Football Union in 2004, before going on to have roles with the likes of Southampton FC and the British Olympic Association.