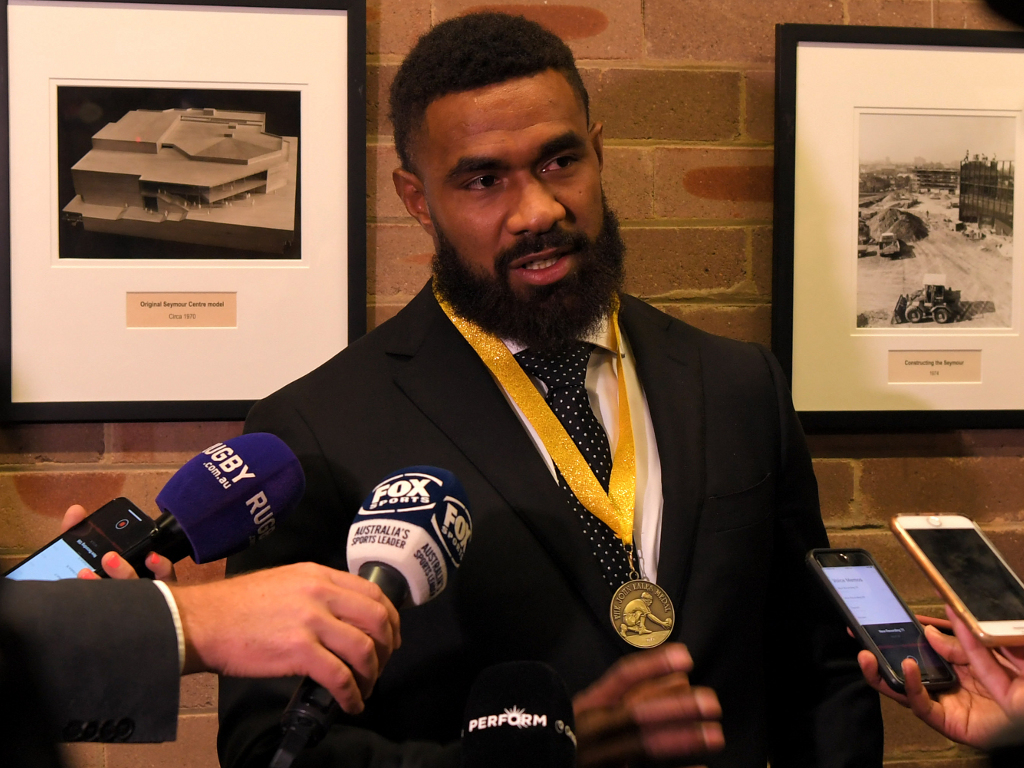 Koroibete stormed home with strong performances in the Rugby World Cup to win the medal with 200 votes, ahead of fellow star back Samu Kerevi (150) and skipper Michael Hooper (141).

Kerevi was the leader heading into the World Cup, just edging out Koroibete, but the winger’s consistency through the tournament propelled him to his first John Eales Medal.

Lock Izack Rodda was a surprise early leader after the Spring Tour count but fell back down the pack as the season went on while hooker Tolu Latu moved up the order late in the piece, finishing in fifth overall.

Koroibete is the first specialist winger to claim the award, which has historically most often gone to forwards.

Speaking after the presentation, Koroibete said he was as surprised as anyone that he was standing with the medal hanging around his neck.

“It’s such an honour to be in with all the great players who wore this medal, such an honour, I still can’t believe it,” he said.

“I’m wearing this bloody thing and I’m sweating inside. I’m privileged and humbled.”

The 28-year-old is in just his third season of professional rugby and paid tribute to Cheika when asked about the key influences in his journey.

“Michael Cheika spoke to me, he’s the one who moulded me to be here,” he said.

“He didn’t force me to be playing early, he took his time and he gave me things year by year, six month by six month and when I went to the Rebels as well, this year we’ve been working very hard with the coaching staff, they’re the ones who have been supporting me as well and I think I’ve become a better player.

“He’s (Cheika’s) such a great man, he got on well with the boys and I like him as a coach, he’s been honest with (me).

“Something you have to work on, he tells you straight, doesn’t beat around the bush. Unfortunately he’s not here anymore.”

Koroibete said his 2019 form was down to a simple thing.

“I just play for the love of the game…I hate losing,” he said.

“It’s not about me pushing the whole team, my goals are tiny, just me and my winger, compete with him.

“Of course, you’ll become, hopefully you come out better.”

Wallaroos skipper Grace Hamilton capped off a brilliant 2019 to take out the Wallaroo of the Year, and just missed out on the Super W double as well.

Maurice Longbottom and Charlotte Caslick took out the Men’s and Women’s Sevens Players of the Year, awards named to honour the late Shawn Mackay.

Kerevi didn’t finish the night empty-handed, claiming the Super Rugby Player of the year award for his efforts in Queensland this year.

Brumbies young gun Tayla Stanford took out the Super W Player of the Year award after some barnstorming performances for the ACT side this season.

Hooper was voted as the fans as the best Wallaby of 2019, edging out Koroibete in the public vote.

Junior Wallabies captain Fraser McReight made it back-to-back U20s Player of the Year awards after leading the Aussies to their first World Rugby U20s final since 2011.

Teenagers Jordan Petaia and Alysia Lefau-Fakaosilea shared the spoils in the Rookie of the year, an award that covers Wallabies, Wallaroos and Sevens debutants.

Winner of the John Eales Medal for 2019 is Marika Koroibete. Congratulations on an amazing year Marika!#RAA19 pic.twitter.com/ynoubCiov8

Wallaroo of the Year: Grace Hamilton

Referee of the year: Nic Berry

Try of the Year: Nic White vs New Zealand, Perth