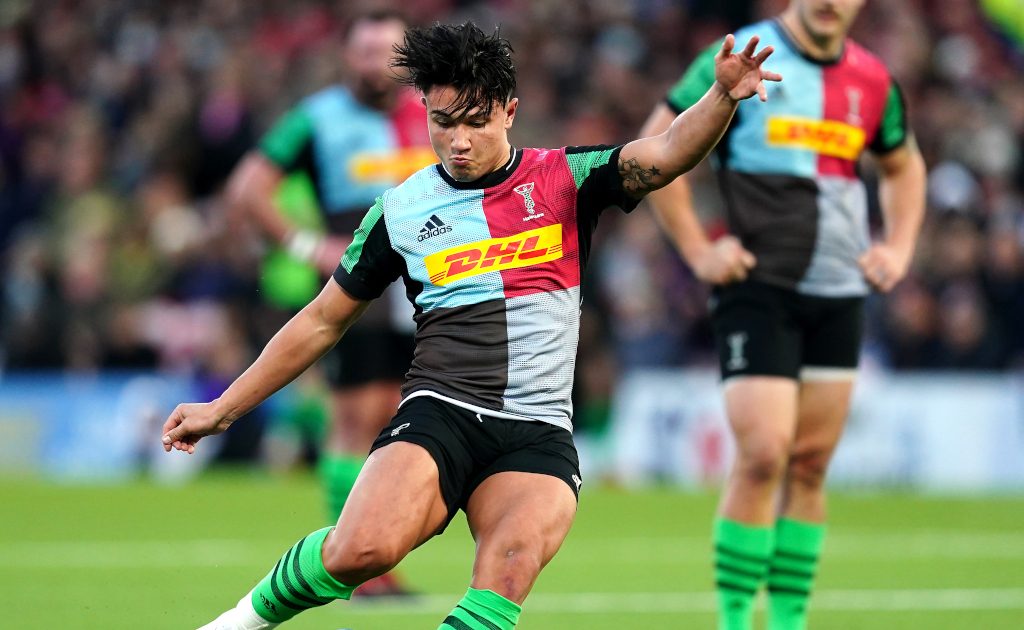 Exeter prop Alec Hepburn was red carded as Harlequins struck late to beat the Chiefs 14-12 in a Premiership thriller at the Twickenham Stoop.

The Chiefs man rather than Simmonds was deemed to have played the key role in upending Marler and the incident came at the end of a half in which the front-row rivals regularly exchanged verbals.

Even with the Chiefs a man down, Quins were initially unable to build on the half-time score of 7-7 after blowing a series of chances in the third quarter, albeit in conditions made treacherous by heavy rain.

Even allowing for the unpredictable handling, it was wasteful from the champions, who prevailed 40-38 when the rivals clashed at Twickenham in June, with full-back Tyrone Green emerging as the main culprit.

As Harlequins forgot how to score, Exeter were rewarded for staying in the fight when the odds were stacked against them by crossing through replacement hooker Jack Innard in the 65th minute.

It looked to be enough for a gutsy win, but they cracked during a late assault as Smith’s pinpoint kick was collected by Andre Esterhuizen and the former South Africa centre slid over in a pool of water.

The score was tied at 12-12, but rising England star Smith nailed the touchline conversion in a dramatic conclusion at Twickenham Stoop.

A thrilling afternoon began when Exeter’s defence was shredded by a sparkling run from Joe Marchant and although he had the ball ripped away by Stuart Hogg, Luke Northmore was able to stab ahead and touch down.

Danny Care was at the heart when Quins probed for a second soon after as he sent Jack Kenningham through a gap only to spill a tricky return pass on approach to the whitewash a phase later.

Tighthead prop Will Collier was celebrating his 200th appearance for the champions with a vintage scrummaging display as Exeter struggled to establish a foothold in the game.

The ball just eluded Marchant over the line as he hunted a cute Smith kick and the only downside to Quins’ dominant opening was their failure to register more points.

Exeter were fighting hard and around the half-hour mark they muscled their way into the home 22 and although an attacking scrum amounted to nothing, they continued to launch waves of attacks.

Their patience paid off in the 35th minute when Joe Simmonds flicked the ball up to Slade, deceiving the defence who were joining the ruck, and the England centre used his gas on a looping run to cross in the corner.

Exeter finished the first half on top, but their prospects of leaving the capital with a fifth successive away win were hit when Hepburn was sent off with Marler unhurt by his challenge.

A defensive scrum saw the under-manned Chiefs face tremendous pressure and they would have slipped behind had full-back Green not butchered his final pass as Quins broke from deep inside their own half.

And chances continued to go begging as Exeter defended furiously on their own line, Esterhuizen knocking over the whitewash and Green flinging a wild pass to an unmarked Marchant.

It became Harlequins’ turn to desperately protect their line by halting a maul just inches short of its intended destination, but they were unable to stop the Chiefs for a second time with Innard the scorer.

Quins engineered their late chance to win and Smith and Esterhuizen made no mistake, nailing the opportunity to snatch a late victory.

Gloucester held on for their first away win at Saracens since November 2008 after Alex Lozowski missed a touchline conversion with two minutes remaining for the hosts.

The Cherry and Whites had failed to prevail in 13 attempts but they deserved their 25-24 success after overcoming the concession of 14 points during a first-half period when they also lost two players to the sin-bin.

Fraser Balmain, Jack Singleton and Lewis Ludlow all crossed for Gloucester tries with Adam Hastings adding two penalties and two conversions for the visitors, who were marginally the better side throughout.

Saracens outscored their opponents in terms of tries, touching down four times through Dom Morris, Rotimi Segun, Theo McFarland and Alex Lewington. However, while Lozowski added the extras for two of those he also missed a simple conversion – prior to his late effort which went wide – which ultimately proved costly.

Elsewhere, Dan Biggar kicked 17 points as Northampton secured a comfortable bonus-point win away at Newcastle, running in five tries in an impressive 44-8 triumph.

The attacking flair of the Saints was too much for Newcastle, with Tom Collins, Courtnall Skosan, Sam Matavesi, George Furbank and Tom James all crossing for tries.

The result moves them up to fifth in the Premiership table, just three points off the top four, while Newcastle sit eighth.