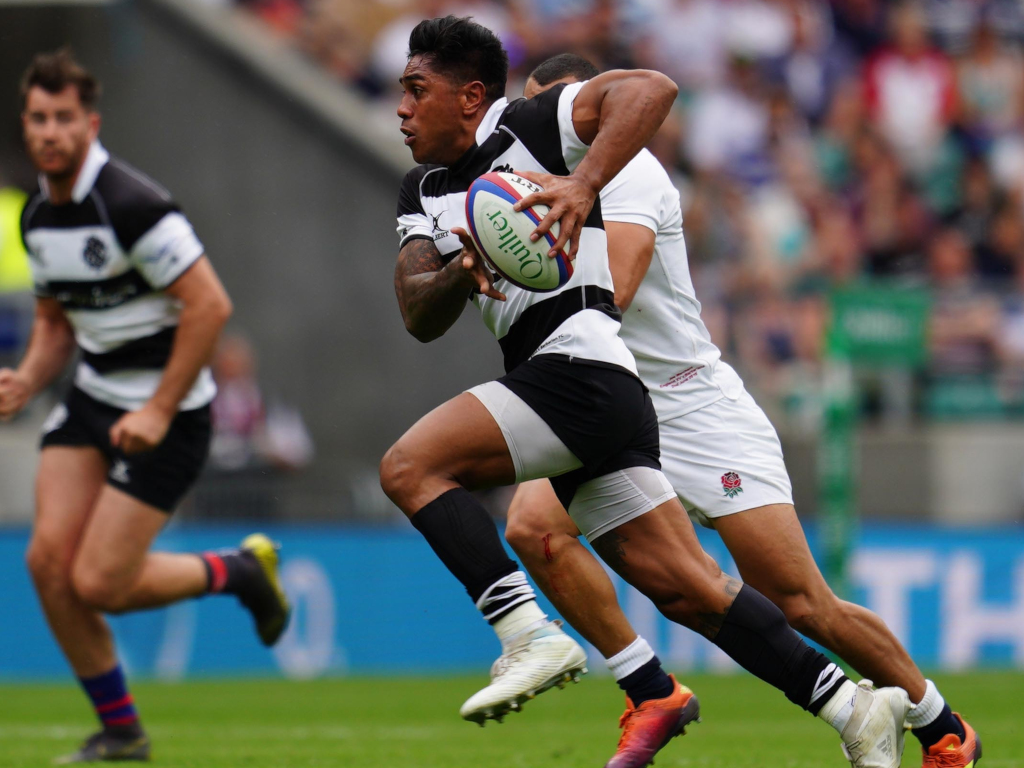 Team news for the Chiefs ahead of the match sees Rob Baxter stick with a largely unchanged starting XV from that which defeated Bristol Bears in the Cup a week ago.

The sole change up front sees Dave Ewers (eye injury) ruled out, so Jannes Kirsten comes in for his Premiership debut alongside compatriot and fellow newcomer Jacques Vermeulen in the back-row.

On the bench, hooker Elvis Taione is fit again after picking up a knee injury during the summer whilst on international duty with Tonga, Sean Lonsdale is recalled to the matchday 23 having missed out last week, plus there is a first outing of the season for centre Sam Hill.

Having both Taione and Hill back in the fold is a massive boost for Baxter, who will also have been encouraged this week with the likes of Don Armand, Alex Cuthbert and Stuart Townsend also returning to full training, plus summer signing Stuart Hogg set to check in for the first time after Scotland were eliminated from the Rugby World Cup in Japan.

Meanwhile, Harlequins have announced its first Premiership squad of the season.

Chris Robshaw again leads the team for the season opener in a side that will see six starters make their first Premiership appearance for Harlequins: Santiago Garcia Botta, Scott Baldwin, Stephan Lewies, Will Evans, Martin Landajo and Tom Lawday, who will be returning to face his former club for the first time.

Form: Exeter Chiefs, who have reached the Gallagher Premiership Final for the past four seasons, finished off last year with just three wins in their last six matches. The Devonians only defeat in Premiership Rugby at Sandy Park since February 2018 was to Wasps in April. Harlequins’ only victory in the last seven rounds of Gallagher Premiership Rugby was 23-19 at home to Leicester on 3 May. The Londoners have lost their last four away games in the competition since their 31-29 victory at Bath on 2 March. Harlequins have lost just once on the opening weekend in the last nine seasons: 29-39 to London Irish at Twickenham in 2017. The Chiefs have lost just once to Quins in their last ten meetings in Premiership Rugby: 26-28 at Twickenham Stoop in November 2018.

The Premiership returns to the AJ Bell Stadium on Saturday as Sale Sharks entertain Gloucester in the first round of the 2019/20 competition.

Steve Diamond has made five changes to the starting line-up that beat London Irish 27-22 at the Madejski Stadium last Saturday as the Sharks head into this year’s Premiership campaign unbeaten after four consecutive victories in the Premiership Rugby Cup.

In the forwards, Van der Merwe is joined in the front-row by Ross Harrison and Jake Cooper-Woolley with Josh Beaumont and Jean-Luc du Preez providing the power behind them in the second-row.

Jono Ross captains the side from his usual position of blindside flanker and makes up an unchanged back-row alongside Ben Curry and Dan du Preez.

Will Cliff and Rob du Preez make up the half-back pairing for Saturday’s fixture with the only changes to the backline being Byron McGuigan on the wing, who comes into the team in place of Denny Solomona, and Cameron Redpath, who starts in the centre with Sam James.

Meanwhile, Jamal-Ford Robinson and Joe Simpson will make their first Premiership starts for Gloucester in Saturday’s fixture away at Sale Sharks.

There is a familiar look to the Gloucester Rugby matchday squad. In addition to Ford-Robinson and Simpson making their first Premiership starts in Cherry and White, replacement hooker Corné Fourie could make his first appearance in the Premiership.

Props Josh Hohneck and Fraser Balmain are named in the matchday squad for the first time. Rugby World Cup representatives Callum Braley, Chris Harris and Jake Polledri are not considered for selection while Willi Heinz and Franco Mostert are still on duty in Japan with England and South Africa respectively.

Form: Sale Sharks lost only once in the last five rounds of Gallagher Premiership Rugby: 17-39 at Worcester on 13 April. The Sharks have won their last seven matches at AJ Bell Stadium in all competitions since Exeter beat them there in Premiership Rugby in early March. Sale have been defeated on the opening weekend of the past five seasons. Gloucester Rugby reached last season’s semi-final only to be defeated by the eventual champions, Saracens. Gloucester’s only win in Gallagher Premiership Rugby since round 19 was at home to Newcastle on 4 May. Gloucester have lost their last five away games in all competitions since their 40-31 victory at Northampton in round 18 of Premiership Rugby. The Cherry & Whites’ only loss on the opening weekend in the last four seasons was at home to Leicester in 2016. Sale have lost just one of their last four fixtures against Gloucester: 16-20 at Kingsholm in December 2017, whilst Gloucester’s most recent victory at AJ Bell Stadium came in September 2016.

Saracens kick-off the 2019/20 Premiership season against Northampton Saints with 11 of the starting XV having come through the academy.

Performances in the Premiership Rugby Cup have led to several of the club’s young players deserving their opportunity at the beginning of the campaign.

Rotimi Segun, who scored four tries in the competition, and Ralph Adams-Hale earn just their second Premiership starts while Kapeli Pifeleti will make his first league outing from hooker when Saints visit NW4 on Saturday.

Prop Titi Lamositele began all of USA’s 2019 Rugby World Cup pool matches, completing 80 minutes against England, and returns to partner Adams-Hale and Pifeleti in the front-row.

The locks and back-row remain unchanged from Sarries’ win over Harlequins last time out as does the half-back pairing of Ben Spencer and Alex Goode, with the latter captaining the side as he edges closer to 300 appearances for the Men in Black.

Alex Lozowski created both of Saracens’ tries in his last match at Allianz Park and joins Nick Tompkins in the midfield. The 24-year-old also crossed for four scores in the Cup including a hat-trick against this weekend’s opponents.

On the bench, academy trio Sam Wainwright, Callum Hunter-Hill (on loan from Edinburgh) and Elliott Obatoyinbo will make their Premiership bow should they enter the fray.

For the Saints, director of rugby Chris Boyd has named his side for their first clash of the new Premiership season, with David Ribbans set to bring up a half-century of appearances for the men in Black, Green and Gold at Saracens.

Saints rounded off the Premiership Rugby Cup pool stages with an East Midlands derby victory over Leicester Tigers last weekend, and will be hoping to build on that performance by opening up the league campaign with a win over last year’s champions.

Prop Alex Waller will lead out Northampton at Allianz Park with Paul Hill named at tighthead and hooker James Fish completing the front-row.

Ribbans keeps his place to bring up his 50th Saints appearance, with Alex Moon joining him in the engine room and England U20s international Alex Coles shifting to flanker – he starts alongside experienced number eight Tom Wood and academy openside JJ Tonks, with club co-captain Teimana Harrison missing out through injury.

There are two changes to Saints’ backline as Tom Collins is selected on the wing with Taqele Naiyaravoro and full-back George Furbank rounding off the back three.

Half-backs James Grayson and Henry Taylor – playing against his former club – are selected together for the fourth week running, while Ollie Sleightholme returns to the bench for the first time after recovering from a groin strain sustained against Wasps.

Worcester Warriors centre Ashley Beck will make his first Premiership appearance in more than a year against Leicester Tigers at Sixways.

The Wales international joined Warriors from Ospreys in the summer of 2018 but made only four appearances in his first season at Sixways before he suffered a broken leg in the opening minutes of the European Challenge Cup victory over Stade Francais in Paris 12 months ago.

Beck missed the rest of the season but he made a successful return to action by scoring his first try for Warriors in the Premiership Rugby Cup victory over Leicester four weeks ago.

Beck, who also played against Exeter Chiefs two weeks ago, starts as the only change to the back division that started in last weekend’s Premiership Rugby Cup match at Wasps.

There are three changes to the pack where loosehead prop Callum Black and lock Graham Kitchener, who both came off the bench at Wasps, start along with Scotland international Cornell du Preez who has been named at number eight.

South Africa international centre Francois Venter is in line to make his first appearance of the season off the bench following his recovery from a calf injury.

Meanwhile, Leicester Tigers include five Premiership debutants in the squad for their opening league match of the season.

South African centre EW Viljoen makes his first appearance in a Tigers shirt, joining Kyle Eastmond at centre in the only change to the starting backline from last weekend’s Cup match against Northampton Saints.

Noel Reid and Hanro Liebenberg also start a Premiership fixture for the first time, with prop Nephi Leatigaga and back-rower Jordan Coghlan in line for their first experience of English top-flight rugby as replacements.

Calum Green makes his first Premiership appearance since his return to the club this summer as the only change to the forward pack that started against Saints.

10 of the matchday 23 are graduates of the club’s academy system.

Wasps flyer Marcus Watson is set for his 50th Premiership appearance as the men in Black and Gold kick off their Premiership campaign at home to London Irish.

Watson, who scored a hat-trick in last weekend’s Premiership Rugby Cup win over Worcester Warriors, starts at full-back for Wasps, while five players are also set for their Premiership debuts.

All Black Malakai Fekitoa will make his Premiership bow as he starts in the centres, while Jeff Toomaga-Allen, Sam Wolstenholme, Jacob Umaga and Academy forward Thibaud Flament could all make their Premiership debuts from the bench.

The pack sees Zurabi Zhvania, Tommy Taylor and Kieran Brookes in the front-row, with James Gaskell making his first appearance of the season in the second-row next to Charlie Matthews.

Brad Shields, Jack Willis and Sione Vailanu all keep their places in the back-row as Wasps look to make it a fourth successive opening-day league win.

Meanwhile, London Irish have named their side on their return to Premiership action this weekend.

Scott Steele and Paddy Jackson start at scrum-half and fly-half respectively, with Terrence Hepetema and Curtis Rona in the midfield. Ollie Hassell-Collins, Ben Loader and Tom Parton link-up to make the back three.

Ross McMillan, Harry Elrington and Lovejoy Chawatama are the front-row replacements with George Nott and Conor Gilsenan covering the back five positions of the forward pack. Ben Meehan, Stephen Myler and Matt Williams are named amongst the back replacements.

Form: Wasps have won three of their last five Gallagher Premiership encounters and have won on the opening weekend for the past three seasons. Wasps’ home record at the Ricoh Arena in Premiership Rugby last season was a disappointing won five, lost six. Newly promoted London Irish have lost their last three Gallagher Premiership matches since beating Harlequins 35-5 at Twickenham Stoop in April 2018, their only away win in the competition since February 2015. Wasps are unbeaten in their last six Premiership Rugby fixtures with the Exiles, since London Irish won 23-20 at Adams Park in February 2014. London Irish have visited Ricoh Arena on three previous occasions and lost them all.