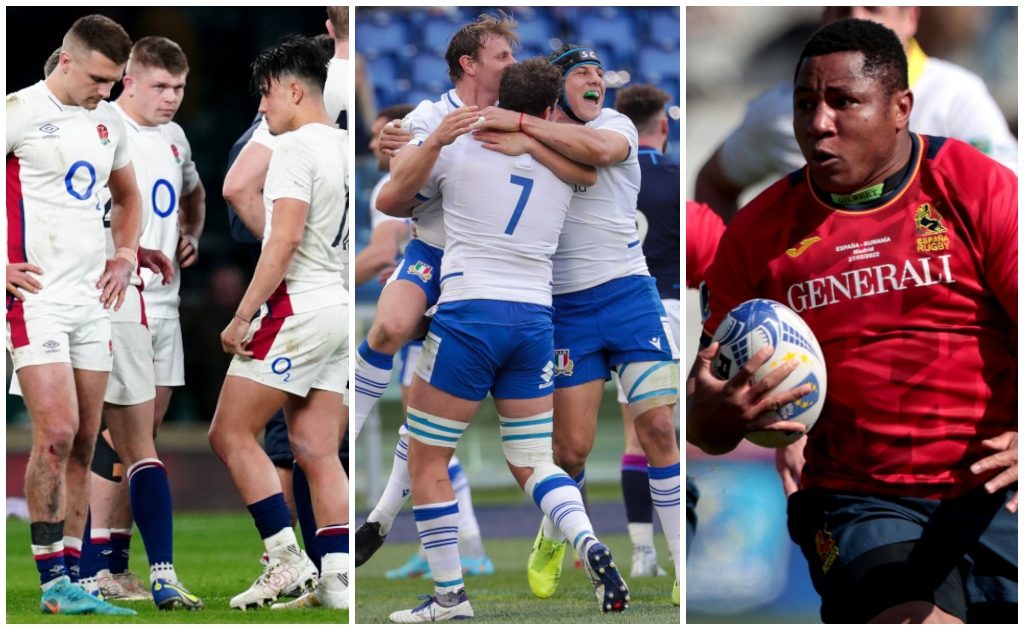 This week we will mostly be concerning ourselves with cold, hard realities, Italy’s improvement and dispatches from Madrid…

Appearances can be deceptive

It was a valiant rearguard action by England. There was plenty of good work in defence. The scrum was as good as it has ever been. There were plus points.

And yet anybody who thinks that just because of those plus points England should be heading towards the World Cup with confidence needs to look through the noise.

Sir Clive Woodward is not always right, but his assessment of the game in the aftermath was spot on – of the game, we should add, not of the pre-match banter which was so dire that it really deserves to be taken less seriously.

“Ireland beat England by a record margin and outscored them four tries to nil. I don’t recall England creating a single clear-cut try-scoring opportunity,” he wrote, which is absolutely where England fans need to start their analysis from.

For England fans to continue, they should then consider that Ireland not only achieved that but they did so on the back of a pretty indifferent performance: a large number of handling errors, a creaking scrum and a good 20-minute spell when they just could not stop giving away penalties. Yet, they still won at Twickenham by a record margin and scored four tries to nil.

In the opening 10 minutes, England were in danger of being blown away. The red card was a distraction to England, but Ireland, certainly in that opening period, looked like the Ireland that had shredded Wales. Had they continued in that vein, it would not have mattered a jot whether Charlie Ewels had been sent off or not. The combinations of skill and speed were evident and were far, far in advance of anything England offered throughout the game.

Where England did well was to resist and to capitalise on Ireland’s inability – once again – to remember that arm-wrestles need winning before beauty contests. Once Ireland belatedly did realise this, the result came. And England did make that arm-wrestle remarkably tough.

But that is all they offered. The loudest cheer was for Maro Itoje hammering Johnny Sexton under a high ball, which says a lot about the paucity of other cheerable elements on offer.

And in the final summation, the reality is still there: four tries to nil and not a single clear-cut try-scoring opportunity created. Until that improves, England will remain tough to beat, but eminently beatable and nowhere near World Cup-winning form.

Scotland’s curious regression this season rendered their clash with Italy something of a forgotten game, but it should not be unremarked-upon that Italy are making real progress with a new generation under Kieran Crowley.

Their first try by Callum Braley was a peach of a set-piece move, while their general play, particularly on their own ball, was far tighter than it had been in previous rounds.

Much of the general post-match has pointed the finger for this at Scotland, talking of defensive lapses and of Scotland being out of sync, but it does Italy’s progress a disservice to talk like that. Perhaps a better summary of Italy’s contribution came from try-scoring substitute Ange Capuozzo, who said: “I haven’t looked at the statistics yet, but we had a lot of possession in their half. We manage to chain the phases of play, to put them in difficulty but it was negated by two or three moments: interceptions and counter-attacks… we can only regret not having put at least three points every time we returned to their half. But we have the satisfaction of having made this collective and individual performance. It feels good.”

Hopefully it is not just another false dawn for Italy.

While England struggled to convince that they were ready to challenge for a World Cup, it’s worth remembering that there will be others simply glad to be there.

Spain’s 33-28 win over Portugal in Madrid on Sunday, in a fine game of rugby – for anyone wishing to watch, there are re-runs available on the Rugby Europe website – not only took Spain through and into a pool with Ireland, South Africa, Scotland and probably Tonga, it also, remarkably, displaced football from the front page of sports newspaper Marca.

It’s 24 years since Spain’s only other appearance, when they also faced South Africa and Scotland; some of the players from Sunday’s win had not even been born.

‘World Roar’ shouted the Marca headline, emblazoned across a team photo with the players aptly all with mouths open and veins bursting. A tweet from the Spanish federation featuring the cover page read ‘thanks for keeping your promise’. Good times all round.

For Portugal, barring a major upset when Romania play Holland next week, the journey to France 2023 is over. A shame, for some of their play was electric – those who choose to see a replay will doubtless be as open-mouthed at the offload for Portugal’s first try as I – but in the final reckoning, Spain were a little too imposing throughout.

The standard was excellent, far beyond what we might have come to expect from Europe’s second tier before. And most pertinently, there were barely any ‘project players’ on show. Hopefully the setback to Portugal is not too consequential and that this team can continue to develop.