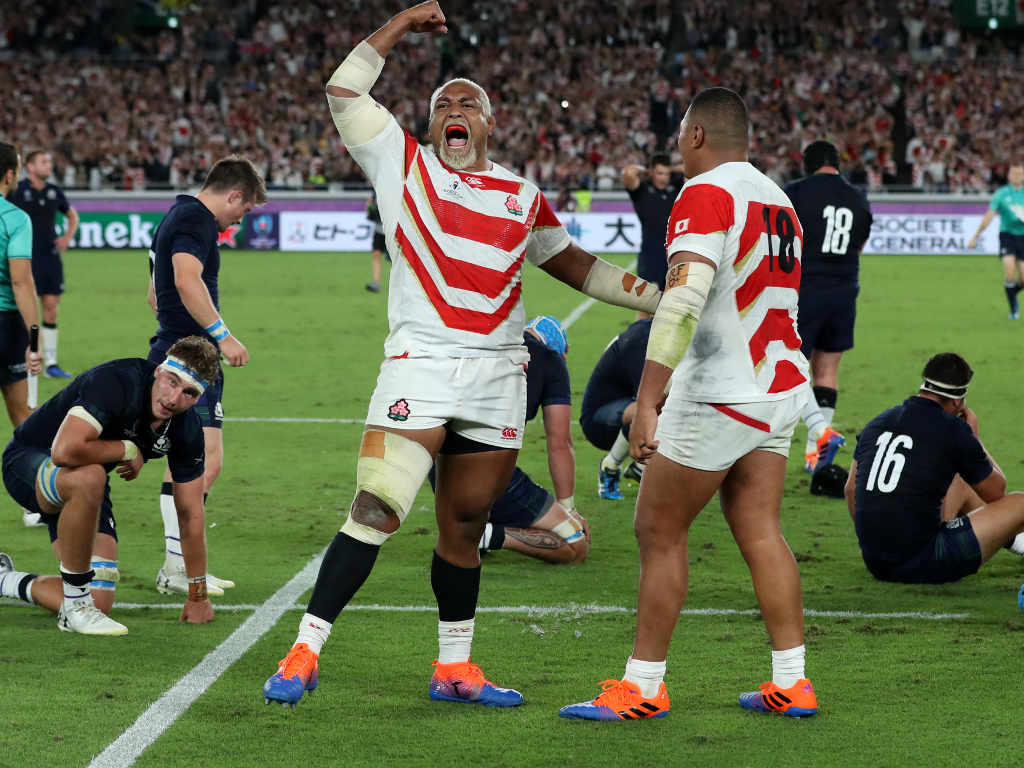 This week we will mostly be concerning ourselves with responsibility for: organisation, head tackles, injury assessments and the future…

A right haggis of it all…

It’s fair to say that Japan were most neutrals’ darlings of the tournament before Typhoon Hagibis brought its trail of destruction, but of the three parties involved in the eventual non-cancellation of the match against Scotland, only they got their responses right.

Both Scotland’s coaching staff and – especially – the CEO got it spectacularly wrong, while World Rugby’s contingency planning for typhoons was exposed for being somewhat ignorant of the dangers such a storm can create. Planning to move a game 14 miles away in case the original venue were to be hit by something that averages between 200 and 400 miles across is not really much of a contingency plan, if you’re honest. Then again, Hagibis was actually so big – 870 miles – that few good contingency plans could really have been made.

But Scotland – which many a neutral has been happy to back in the past – made a dreadful PR hash of their response to the threat of a typhoon. SRU CEO Mark Dodson’s raging set of demands to counter a force majeure threat – one that was a near-certainty by the time he made his statements – was an equally ignorant misjudgement of what a typhoon really is.

The worst line of all: “We’re not going to let Scotland be collateral damage,” was an appallingly Trump-ish piece of self-centred statesmanship ahead of a storm that was guaranteed to cause evacuations, multiple deaths and widespread destruction. The confirmed death toll was rising during the match, while hundreds of thousands of people were still unable to return to their homes after the final whistle. Some Scottish players will now probably be home before many Japanese people.

In the end, Scotland were well-beaten by a better team. But an apology would not be out of place.

🗣️ "We were consistent with everything laid out before the tournament."

Whose shoulder hit whose head?

One for the law analysts in the Ireland-Samoa match, and especially one which ought to be publicly-flagged as the debates around head-contact tackles rumble on.

Not that it was necessarily the wrong decision at the time, and also not that the consistency across the board has, as promised after round one, improved.

But the yellow card handed out to Seilala Lam for his clash with Jacob Stockdale left us scratching our head a little. Not because, as many pointed out, Lam’s action was similar to that of Bundee Aki who had not long prior been given his marching orders, but because of the actions of Stockdale in the incident.

The problem was, Stockdale led with his shoulder and turned shoulder-first into the contact, with the result that while Lam’s shoulder made contact with Stockdale’s head, so also did Stockdale’s upper body make contact with Lam’s head (Lam ducked his head into the tackle a little too). The two contacts were pretty much simultaneous. Yet Lam was the one punished.

So what’s the deal? We’re told that contact between shoulder and head, even as collateral incidence from a natural rugby action, is punishable under the current safety-first environment, but do ball-carriers get immunity from this just because they are ball-carriers? Does responsibility lie exclusively with the tackler?

Not that we’d advocate Stockdale be sent off too, and we certainly don’t think he did anything wrong, but this is an important debate to have, especially in the wake of the incident involving Rhys Patchell and Samu Kerevi, where Kerevi was penalised for leading with his arm to Patchell’s head.

Protecting ball-carriers too much will be counter-productive under these new tackle laws, in the same way that penalising a tackler for tackling in the air when the carrier jumps into the tackle (a la Kyle Sinckler on the last Lions tour) is.

The carrier also carries elements of responsibility for safety in contact. This must not be forgotten, and it needs to be included in the debate.

👀 Thomas Ramos was replaced in France's World Cup squad last week due to an ankle injury.

He's just been named to start at fullback for Toulouse against Castres in the Top 14 tomorrow. pic.twitter.com/Okt4oSSeKF

Thomas Ramos sent home with an ‘injury’ and Vincent Rattez called up to replace him. Fair enough.

Not, though, when Ramos is fit enough to play 80 minutes of top flight rugby six days later.

Speculation is rife now that Ramos was actually offloaded because of some sort of breach of team protocol, or perhaps he was on strike, or whatever… given the rumours swirling around the French camp, no possibility should be excluded.

But being as Ramos has now pretty obviously proved he was not injured, doesn’t World Rugby have a bit of a problem? The rules state a player can be replaced for compassionate or injury reasons, but Ramos now doesn’t appear to fall under either of those categories. How closely will this be looked at?

Major League Rugby having a big impact on the future

Farewell to a number of teams, but there’s growing excitement in the rugby world about the future for many a tier two nation – if they can be given the platform to develop right.

The USA, faced with a stinker of a draw in this World Cup, as well as Canada, whose draw was no less difficult, are both looking positively at the platform of Major League Rugby and the new professionalism sweeping North America from which to relaunch themselves.

Fiji and Georgia both re-proved their pedigrees, with Fiji especially making a heavy case for more inclusion at the top table from World Rugby.

And there’s Uruguay, who also have recently managed to get themselves to the brink of a local professional league and who also boast several players in Major League Rugby. It’s not inconceivable that as MLR expands, more international tier two talent might be attracted stateside too – Namibians, Samoans and Tongans and even players from other countries who didn’t quite make the tournament itself.