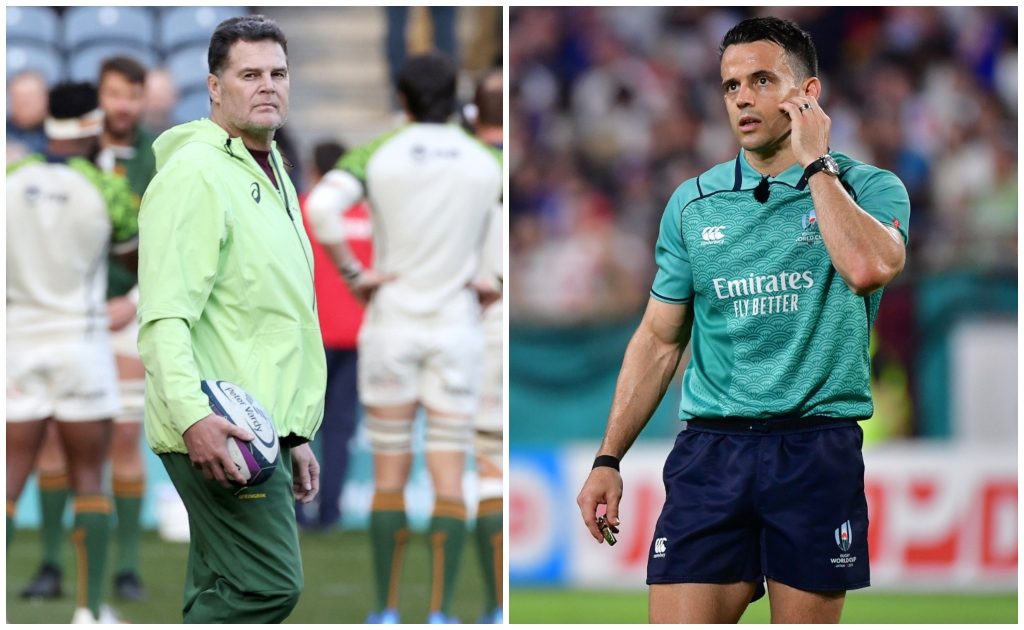 World Rugby has not covered itself in glory this week, for a number of different reasons. The starter for 10? The Rassie Erasmus saga.

Not that Loose Pass is quibbling over the outcome. Mr. Erasmus deserved to have the book thrown at him in no uncertain terms; those who seek to defend him clearly have not waded through (and we do mean waded, it is slow and taxing to do so) the 80-page document detailing the disciplinary process.

Yet the practical outcome is not all that satisfactory, while the timing looks positively ridiculous.

It was July when Mr. Erasmus popped up on video screens around the rugby world in full Springbok regalia and let loose for 62 minutes about the perceived wrongs his team had suffered, having already threatened Nic Berry directly with doing so. He overstepped the mark by some distance, not in all of his analysis, but absolutely in his methods of delivery – and for those already gnashing teeth about referee accountability, be patient and see below.

By the time he was properly censured for it, it was November. Four months? Covid notwithstanding, come on. Mr. Erasmus did not even feel the need to speak to the panel, preferring to make a written statement, so it is not as if there were travel delays and such to factor in. Player suspensions are generally dished out within four days and while this is more complex in nature, it was not four months more complex.

Then there is the punishment itself. Mr. Erasmus has been banned for lengths of time. 10 months’ worth of matchday activities takes us through until the end of next year’s Rugby Championship, but two months of rugby activities takes us neatly through to mid-January, during which time the Springboks will, by and large, be doing a lot of relaxing after a draining year. In practical terms, Mr. Erasmus’ ban from matchday activities encompasses one match, which now already has been played. Shouldn’t coaches, if to be banned from activities, be banned in terms of matches as well?

Which then brings us to the final point: if it is going to take so much time and hassle, if it is of such gravity that it needs to be considered away from the noise of the usual international week activity, what is the actual point of announcing such a loaded decision three days before one of the biggest games of the year? Whether there is any hidden agenda to announcing it when they did, ahead of South Africa v England, is not an aspect Loose Pass can comment on, but announcing the verdict on Sunday morning would have meant the question would not arise.

World Rugby should have addressed this weeks ago, should have banned Mr. Erasmus in matches rather than months, and should have delivered the verdict at a more neutral point in time. As with parts of Mr. Erasmus’ video rant, World Rugby has made the right points in absolutely the wrong way.

Sensitivity not a strong point

One of World Rugby’s other big announcements last week was to point out that concussion/repeated head blows is but one of a dozen deadly sins when it comes to maintaining long-term brain health.

Brilliant. We now know that binge-drinking into our 50s probably won’t end well, especially if backed up by a pack of fags a day. We now know that living next door to a smoke-belching factory might affect our health, just as we know that socially-isolating oneself is something that can drive one round the bend. We now know that being obese can lead to long-term health problems. Thank goodness for that, now I know not to have that sixth piece of cake. Also putting oneself at risk of repeated brain injury is unhealthy, but then of course, we knew that already.

None of the above are wrong, of course, and it’s all sensible wider-market stuff. Those who lead moderate lives and don’t fall into the above traps have a terrific chance of not becoming one of the small percentage of dementia cases whose onset is pre-retirement age. But we have a steadily-growing queue of professional sportsmen, virtual paragons of fitness and health, whose dementia onset has been alarmingly close to pre-middle age – the chances of that happening to anybody, even the most dedicated couch potato, are incredibly small.

For World Rugby to put repeated brain injury into the same pot as a lack of education over what constitutes good lifestyle choices is ridiculously insensitive when you consider the respected athletes currently preparing the concussion lawsuit. There are many rugby players in the wider game who could stand to chug and puff a little less, or even turn up to training as well as matches to get rid of a few fried breakfasts, but Carl Hayman, Michael Lipman and Alix Popham, to name but three, are not they.

Such a shame, too, as World Rugby has also made the announcement of free brain health clinics for former players which can only do good. The recent announcements on limits of contact training are a step in the right direction as well. And there was much more reason in Jamie Roberts’ urges of caution over the concussion debate this week.

But for the many players struggling with the long-term effects of concussion, of whom the above three are the pioneers of a legion waiting in the wings to take the administrative body to task, including brain injury in the fanfared dirty dozen of dementia-causing factors was a bit of a slap in the face.

On the subject of accountability

No sooner had Mr. Erasmus’ ban been dished out than another coach had all but hauled himself in front of the suits for a ticking off.

Dave Rennie’s astonishing post-match tirade at the officials of the Wales-Australia match has surely earned him a hearing of some sort; if it hasn’t, you may as well issue a written apology to the South African conspiracy theorists.

There’s a lot written in a lot of forums about accountability for referees, about how if a coach gets a call wrong, he loses his job, yet referees seem untouchable. Yet we’ve had a cursory check-back: we can’t think of a coach who lost his job because a few referee calls did not go his way. We can think of a couple of referees who had a few games out of the middle while he got busy with his work-ons though.

Nor, more pertinently, can we think of a referee who gave a presser after a game which might go along the lines of:

“I thought some of the decision-making was horrendous. The players tackled around the chest area so occasionally I had to card one, while the kick-chase running lines had clearly been coached to ensure as much obstruction as possible to the receiving team, making penalties inevitable. The sheer amount of kicking was astounding and made it very hard for me to make the game as attractive as possible, while it was tough for me to help the team wasting all that possession win as well as they wanted.

“There was only one team rucking, the other team just talked a lot about unfairness, which seemed counter-productive to me but they said the coach had told them to try and ruck this way, which is against the laws. Then there was the decision to substitute the only prop who was scrumming straight, which had a huge impact on the match and made it much harder for me to look good.

“I can’t referee rucks and let a game flow when players don’t come in through the gate, so the coach will have to go away and have a long, hard look at himself. If his players stand too flat, the defensive line is bound to come up faster. How he is not accountable for such a mess of a game-plan is beyond me.”

Maybe referees should give post-match press conferences and fire back. Or maybe everyone should just shut up and let them get on with it – perhaps even work with them. By and large, there are more people holding referees accountable than anybody else.