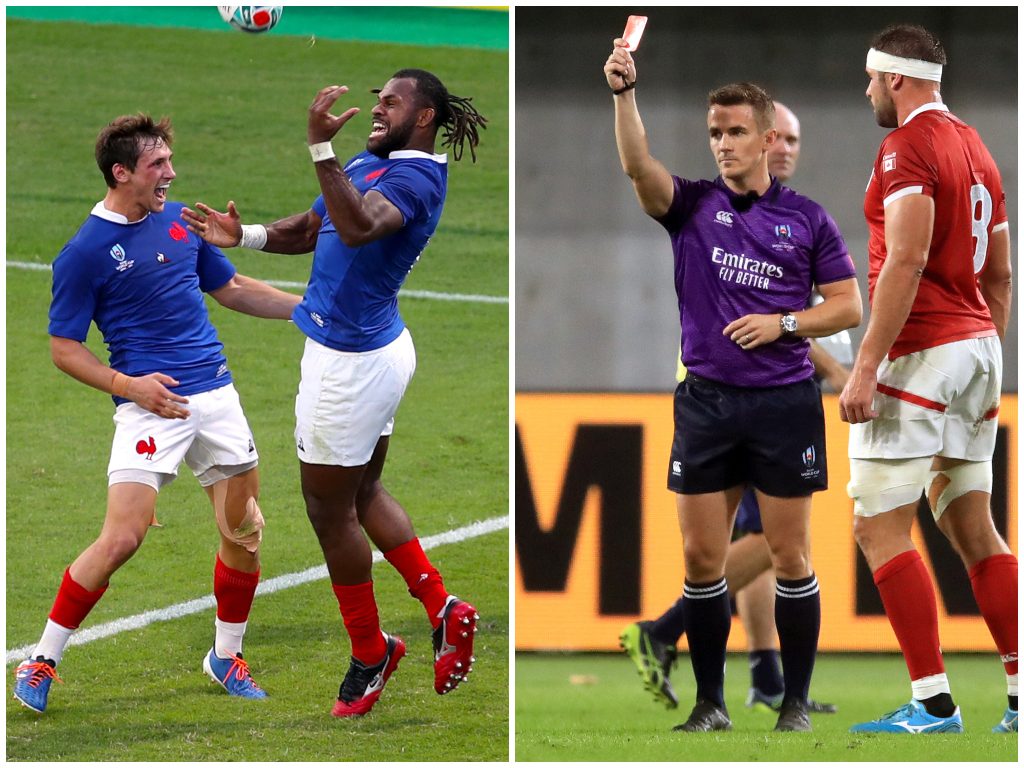 This week we will mostly be concerning ourselves with the anticipated rash of red cards, the ongoing problem with the ruck and classic France.

They said it would happen before the tournament, and it has happened. Call it over-sensitised, call it soft, call it better late than never, call it what you will, rugby is now every bit the sufferer of the frequent red card just as soccer is, except the effects on matches are more significant.

There have been six red cards at this World Cup, with 17 yellow in the 29 matches to date. Moreover, more than half those red cards have come in the first half of matches, with adrenaline and player energy levels still high. Taking suspensions into account, there should apparently have been five more. Many a game has been irrevocably effected; in Argentina’s case the slump in the team was visible.

In many of the games, such as Canada’s defeat to South Africa on Tuesday, the red card has not made the biggest difference. But as we head towards the glamour matches at the end of the tournament, the fear is all-pervading that we will see an even and exciting game tipped, so to speak, by a tackle or clean out made with no intent to harm, but misjudged. Or worse, a tackle made well, yet rendered red-cardworthy by the position of the oncoming player.

This is rugby now, and will continue to be as the safety of all becomes ever more in focus. Red cards are going to appear all over the place and teams are going to feel appallingly hard done-by. And games will be won and lost on moments of rulebook technicality. For the loss of a player in rugby is so much more significant strategically and tactically than in football.

But as Steve Hansen very sagely said on Tuesday, “I do not know whether breaching the guidelines is avoidable, but we have to find a way…World Rugby are meant to be leaders of the game so they’ve looked at it and decided this is the way to go…so we are in a pattern of trying to fix a problem. Have we got it 100% right? No. But it is what they’ve asked us to do and as keepers, players and coaches of the game, then we’ve got a responsibility to try to respond to that and do it the best we can. I think you always find a balance.”

And our opinion here is that we are pretty close to it. Gone are the inconsistencies of the first few pool matches, the last few decisions have been pretty spot on. Many a match is set to be finished with 14 men in the short term, and coaches who have looked at the ’10 minutes with 14 men’ scenario will now need to expand their thinking.

But now the officials and the laws appear much more in line, this is going to be a World Cup where the nature of the game changed for good.

We touched on this one last week, and it’s not got any better so we’re going to look at it in more depth this week: players need to be staying on their feet more at rucks.

There are several reasons for it, not least the one about safety where a player good enough to get over the ball on the ground is leaving his upper back exposed to 100kg missiles of furious flesh, but it is also absolutely killing the contest of the ruck as a concept.

Strictly speaking, any rucker should not have his hands on the ground, as this would mean he was not supporting his own body weight. As that interpretation was gradually eroded, there was at least the premise that the cleaner would arrive at the contact point and drive through it with an upward motion. At least they were pretending to try and be on their feet.

Now there is not even the pretence. Cleaners are simply flying over the man on the ground into their opposition and wrestling or dragging them to the ground as quickly as possible, making it look as though it was an unavoidable situation. Consequently rucks are simply a mass of bodies on the ground, a mass which no referee could accurately officiate. You sometimes get the impression the referee is simply glad the ball is to be seen when it emerges.

When the tackles to the head and other such safety aspects are cleaned up, the ruck has to be the next focus of review. Making players stay on their feet again would be an excellent start.

Where have you heard this before: French team guilty of under-performance scrambles to the end of pool stages and squeaks through, all the while with the players leading open revolt against the coach and playing with no discernible style of play?

Expect France to be playing someone on November 2 in Yokohama.