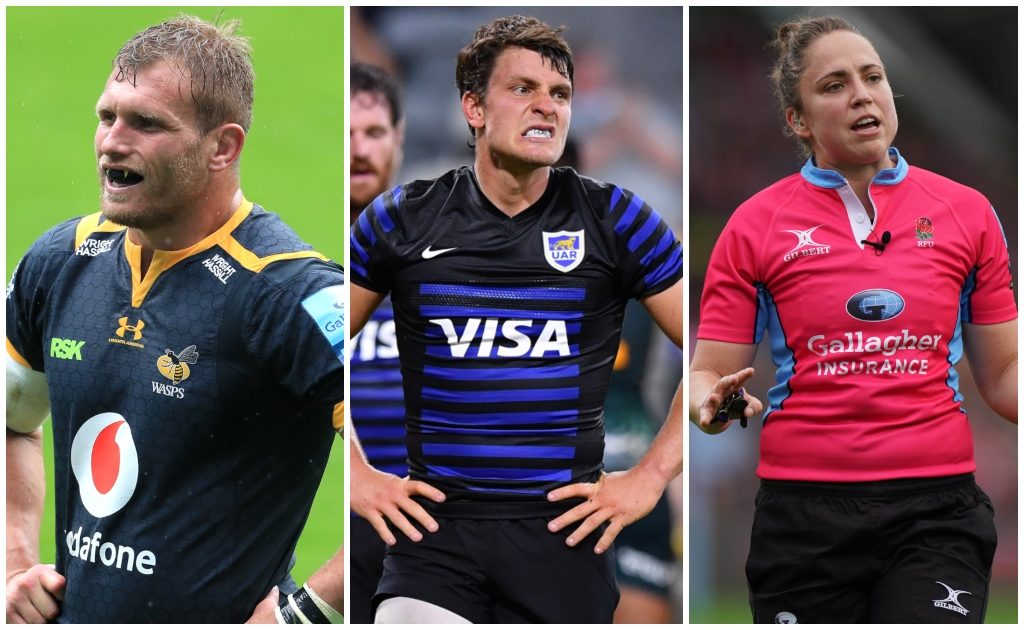 This week we will mostly be concerning ourselves with another bizarre red card, Argentina’s lost way, the pioneering Sara Cox and a curious twist to training schedules…

Not that it mattered to the result, but if ever there was an endorsement of this column’s ongoing campaign to clear up the maul, it came in the form of a thoroughly unwarranted red card handed to Brad Shields on Saturday.

But from memory and notes, the Bristol maul broke up into at least two distinct parts, both of which faced Wasps opposition believing the ball to be in the part it faced. One part faced Shields on his own – that was one Bristol player with another latched on to him, the other part was a good couple of metres off to the left involved in its own tussle with defenders. Taking defenders out without the ball? Of course not, it’s a maul, so they can do what they want…

Shields, clearly thinking that being as the maul had splintered and disintegrated it was fair game, tackled the ball-carrier and his latcher. And as every TMO replay ticked on, we just could not find anything wrong with it, bar the fact that as the Bristol players were in the original maul, somehow that gave them the right to behave as a maul even after it had disintegrated. But Shields thought he was tackling a player (and latcher) and it’s tough to find a reason he might have been wrong about that, or even more pertinently, why he should have known better enough to have deserved a second yellow card.

Again from memory and notes, but the reasoning behind the yellow seemed to be that Shields had collapsed the maul. Two metres from the line with a maul – or whatever it was – rumbling forward and it gets ‘collapsed’, yet there’s no penalty try?

There is a very telling image of the incident where Shields is shown the red card, where Bristol captain Steven Luatua is looking away almost embarrassed. Shields just looks bewildered. Logic and reason gone from the situation, his disciplinary record blotted by nothing more than a plain rugby act (although the first yellow, for the record, was pretty well deserved). His great sin seeming to be trying to make some vague sense of the ludicrous confusion that is the maul.

There’s a reason some teams rely on kicking, winning penalties, going to the corner and mauling as a whole game strategy, and that reason is plain and simple: the maul is a barely stoppable beast. It can be four metres wide and twisting, yet woe betide a defender who doesn’t come in through a gate which a kitten might struggle to enter.

It can splinter into pieces, with players not carrying the ball free to take out defenders with NFL-style abandon while those still in possession of the ball cannot be tackled because they are that mythical untouchable creature: the maul. Players at the back can be bound on by dint of an outstretched hand grabbing a fistful of jersey; they can even unbind, swap the ball-carrying hand to the other and rebind (regrab another fistful of jersey), all the while using the magical, wonderful, untouchable human wall separating them from defenders that is: the maul.

It is a mockery of so many of rugby’s rules. It is far, far too chaotic to referee coherently and it is a consistent source of cheap and boredom-inducing points. It must, must be the next item on the law-tweaking agenda due for a serious rethink. Right now it is often a waste of everybody’s time at best, at worst, as Shields found out, a source of wholly undeserved censure.

The photoshoot snub was a beyond the pale act of snobbery from media establishment – the other nations are not blameless, they should have refused to do it, but it is the local media who dictated the terms – but it goes to show that from a commercial point of view, Argentina are not the drawcard some moneymen might want them to be.

In this regard, there is little to blame other than the pandemic. It’s hit rugby everywhere hard, but it has obliterated Argentina’s generation. More and more players are being signed up to team and franchise contracts in Europe; meaning either we get a nice new integrated calendar sharpish or the players are going to be subject to all sorts of Regluation Nine shenanigans over the next couple of years.

There is no more Super Rugby Jaguares fun, meaning the top-level preparation for up-and-coming players is once again either lacking or elsewhere. And while this generation continues to try gamely, the lack of home games and the simple human relief offered by such is clearly eating away at the heart of this talented team.

Nobody can really plan for much right now. This pandemic obstinately refuses to go away and while the perils of South Africa’s economy are known to all, Argentina’s is not much better – and rugby is still, comparatively, a minority sport there. The rich world is on its way to recovery, for Argentina that road is a lot longer. There is no obvious solution. But Loose Pass fervently hopes that Argentina gets the support it deserves from its peers and from World Rugby; it would be calamitous for one of rugby’s great evolutionary stories to get a crash-and-burn ending.

The lady in the middle

A hugely impressive display from Sara Cox this weekend, leading the way for many a good female official around the world currently – and there are many. None of it anything to do with ‘soft skills’ or any of that mansplaining rubbish either: this was a good refereeing display from someone who knew the laws, applied them, and used them well enough to keep a good game going.

Dave Rennie made an excellent point this week when, faced with questions about World Rugby’s new guidelines on contact training time limits he asked: “who’s timing it?”

Officially nobody now, for sure, but the step towards blanket governance of professional training regimes is a huge one and is very much a tilt towards a Collective Bargaining Agreement (CBA)-style management, a la NFL.

But that can go both ways. Players have tremendous clout in the governance of the NFL as a result of the CBA and its periodical renegotiation. In an age where players are being flogged and flogged for every clink of silver in sponsors’ pockets, how long before rugby does get a global calendar, even a CBA?

And how long after that first CBA before the first holdout? A bold prediction would say: shortly before the 2031 World Cup, to be held in the USA…