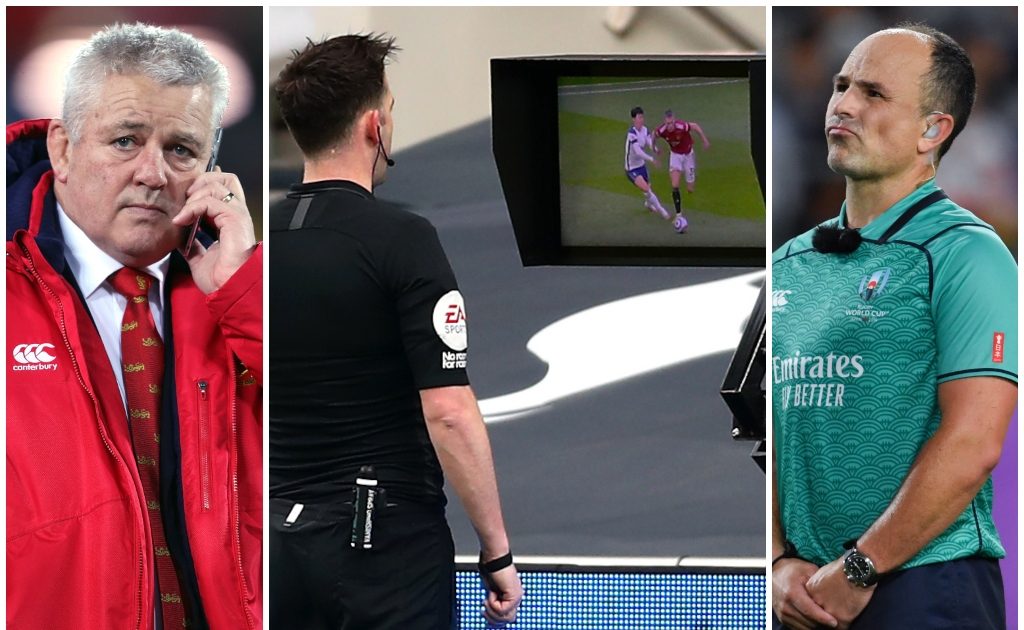 This week we will mostly be concerning ourselves with both sides of the Lions tour, TMO improvements, the strange lack of quality in France and a thought on Exeter and England…

As normality began to vaguely resume this week in the UK, and as the Champions Cup quarter-finals, acknowledged to be the late auditions for lucky potential Lions candidates, concluded, thoughts naturally begin to turn more intensely towards this July’s tour.

There are few good ones on either side. When no fewer than three short-listed coaches turn down Lions appointments, you know this is a tour that already is sailing in choppy waters.

Factor in also the odd insistence from Warren Gatland that nobody from the England set-up is coming and the picture is of a tour departing from a fractured background. One can only speculate as to why Mr. Gatland is so opposed to coaches of the ilk of John Mitchell and especially, given his working knowledge of South Africa, Matt Proudfoot, but the underlying feeling is that there is, at the very least, a major culture clash between Eddie Jones’ England and Mr. Gatland’s Lions plans which the latter simply doesn’t want to deal with.

So it’s a tour already creaking under the Covid-19 strain. But then what is it heading to? The UK government’s volte face on letting in South African teams to participate in the Rainbow Cup this spring will doubtless damage the Springboks’ preparations – notwithstanding the number of Bok players already plying their trade in Europe. There are still unlikely to be crowds in the stadia even when the Lions do arrive.

What will the tour be? It should be the cream of Britain and Ireland taking on the world champions in front of raucous full houses in July. Right now it will be a worn-out set of British and Irish players, coached by coaches of the teams who are not England, taking on a team that has not played together or been involved in meaningful preparatory competition for two years in front of eerie silence and whirring TV cameras.

Things can change. South Africa’s government may let in domestic fans, while the development of the pandemic’s easing in the UK might also be decisive on whether the much-cherished touring fans, and their wallets, can enter the rainbow nation. The franchises in South Africa are still exploring other possibilities on how to play the Rainbow Cup, with a bio-bubble in Ireland believed to be a possibility.

So far the tourists’ likely squad looks largely injury-free and if the coaching staff is not exactly what Mr. Gatland might have intended, it certainly is not in any way bad.

We could yet have a successful tour where the only major change to the initial plans is playing it six weeks later. But on the back of so much disruption in its build-up, it’s a lot harder to look forward to than it should be, while this miserable pandemic has made such a habit of dashing hopes and expectations that it’s tough to wind oneself up again.

A nod to law officials upstairs and down

It isn’t perfect. It takes more time than it should sometimes, the outcomes are still occasionally controversial and there are still too many interruptions. But having watched a weekend of action involving both shapes of ball, you have to say that in comparison to soccer, rugby is getting the video ref concept more and more correct.

The framework – not least with the referee giving an on-field call as a starting point and the point-by-point check procedure for foul play – is providing viewers not only a solid foundation for understanding, but also encourages viewers and spectators to go through that process themselves, thus removing much of the emotion at moments where lack of such understanding and insight can cause such a fuss.

Meanwhile, the crackdown on making chasers wait until they are actively played onside continues to have a positive effect, with significantly more counter-attack attempts obvious in the matches where the officials are sharp on it.

So props to the law administrators. Now, if only we could get officiating of mauls, outlawing caterpillar rucks and time-wasting antics correct…

🤔 Check out our #HeinekenChampionsCup Team of the Week.

For the neutral throughout the Six Nations, France would have surely been your team to watch. Entertaining, free-running, good skills all round, all built around the outstanding crop of young talent emerging from the club academies.

So goodness only knows what happened on Sunday. Two matches, 53 penalties (most of them goalable), no tries, skill levels and discipline levels akin to Sunday morning oldies games – which is how one commentator actively compared the Racing v Bordeaux game to.

Once again Loose Pass found itself agreeing with Austin Healey when he said of Maxime Machenaud’s match equalising kick with a couple of minutes to go: “have you ever wanted a kicker to miss this much?” He nearly did too, as an absolute dog of a kick scrambled drunkenly over the bar. Thank goodness Mathieu Jalibert put us out of our misery two minutes later. At least Toulouse and Clermont had the mitigation of torrential rain, but it looked for all the world at times as though all four teams were trying to throw the game away, with Clermont and Racing doing that a bit better.

A real anti-climax to what had been a good start to the weekend’s rugby on Saturday. It will be interesting to see what the two winners manage to do against each other.

It’s long been a source of bemusement among Exeter fans and England observers as to why there are not more of Exeter’s English-qualified players in Jones’ squads. Perhaps on Saturday we got our answer.

Good in patches, Exeter were ultimately found wanting at many aspects by Leinster’s international-strewn side and most pertinently, seemed unable to respond when the Irish turned up the heat, something that last year had been such a strength. Exeter can be devastating on form, but as the first 15 minutes against Lyon also showed, they can quickly come in and out of games.

Not that England have been mentality monsters in this past Six Nations either and Exeter’s overlooked may well get a look-in as England’s squad is overhauled as it surely must be, but given Mr. Jones’ insistence on mental toughness and resilience, it seems reasonable to assume that the Chiefs’ players’ frequent shortness of concentration span have been grounds for his selection decisions.

Assuming England’s planned matches go ahead while the Lions are touring, and assuming the Lions take a healthy England contingent, it will be interesting to see how Exeter’s call-ups to England – there surely must be some – fare under Mr. Jones’ famed intensity.