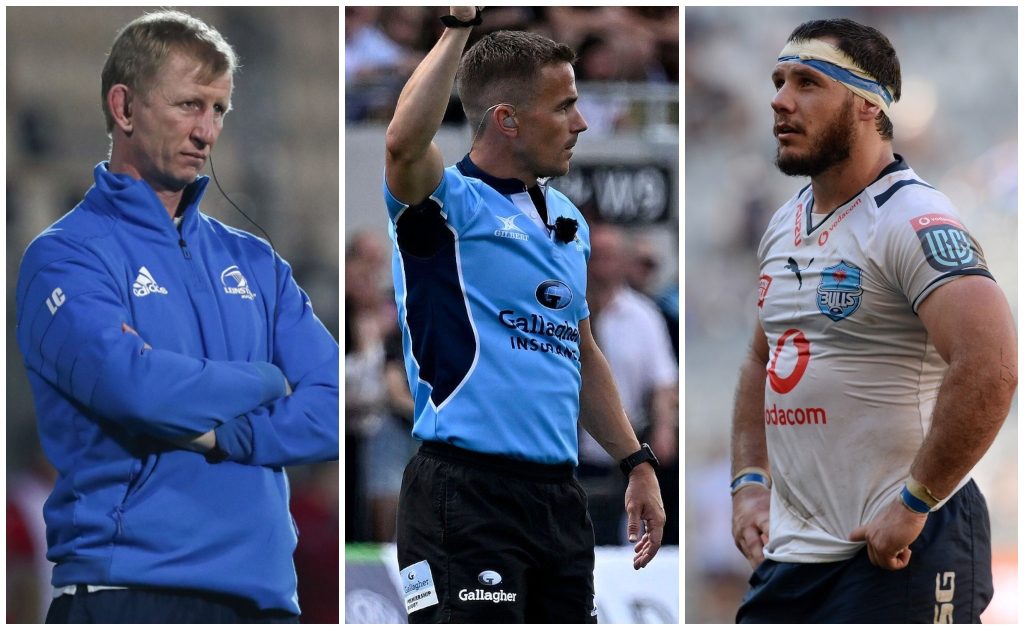 This week we will mostly be concerning ourselves with head shots, Premiership symmetry, Leinster’s anti-climax, and a few other scraps from a thrilling weekend…

Two very different Premiership semi-finals on Saturday bore one thing in common: moments of contact to the head were both far too frequent and perplexing in the judgement thereof by the officials.

Luke Pearce in particular had a plethora of head contact moments to deal with. He did admirably well to not send anybody off and to keep himself within the framework; if anything, his handling of the multiple situations illustrated in very clear terms just what a devil of a job it is to understand what is sanction-worthy and what is not.

Saracens, in particular, got extremely lucky. Billy Vunipola may have somehow come off worse when tackling Andre Esterhuizen, but although he had initially stooped as the moment of contact approached, his body was quite clearly rising upwards in the final second before the hit.

What saved him was that he had stooped, probably with a dash of the fact that he came off worse. And here again, we have the difficulty of this all: the fact that Esterhuizen stooped and compacted himself in textbook ‘taking the hit’ fashion meant that although Vunipola’s shoulder hit Esterhuizen’s jaw, Esterhuizen’s also hit Vunipola’s. On the one side then, we can argue Vunipola could easily have seen red, on the other, we have to consider how he can be guilty when he’s just been stunned by an opponent’s shoulder thundering into his head? Similar applied to Harlequins‘ Jack Walker – awful technique, but was he rescued because he actually came off worse as a result?

The really lucky duck was Alex Lozowski, the only incident we think Mr. Pearce got properly wrong. He flew up, out of control and as a desperate measure. He caught Joe Marchant in the head. That it was a glancing blow owed everything to Marchant’s dancing feet and nothing to Lozowski’s tackle. Are players to avoid being sanctioned for poor and reckless technique simply because their opponent manages to avoid injury?

The Leicester-Northampton game, too, saw a yellow card which really could have been red. Guy Porter got mitigation because Rory Hutchinson was stooped as well, but the replays showed that Hutchinson had stooped before he had received the ball, with Porter a good five metres away. Should there not be an onus upon defenders to recognize such things in advance? It was hard to justify, also, that Porter’s yellow card head shot and that of Oisin Heffernan later were similar offences meriting the same sanction.

None of this is meant to criticise the officials, who stuck to their frameworks and tried to make sense of dynamic situations in which huge competitive men are crashing into each other at high speed. Their consistency comes from their frameworks and it’s as good a system as we have.

The shadow of head injury looms over us all (on which note, there was also a startling lack of HIA), yet the collisions we see are part and parcel of the game. It’s the impossible job. But on weekends when there are so many of these moments – and not just in the Premiership – it can be incredibly frustrating.

You’d be forgiven for forgetting that the only reason Leicester were not relegated in 2020 was Saracens’ salary cap breaches. So much of the talk has been about how the London club has had to rebuild, rebear and recover, and they’ve done it well. Reaching Twickenham and scooping the title will be the fulfilment of a two-year mission to prove that they can do it within the rules as well as outside them. It’s been a tough time, for sure.

But Leicester’s has probably been tougher. For the building blocks of Saracens’ revival were already there – the team culture, playing talent and internal organisation were all proven elite, it was only the books that needed balancing.

Leicester’s revival has, in this context, been far harder. There’s been a clearout of some dead wood in the playing staff, a change in the coaching setup, a complete cultural overhaul in the club from top to bottom. A new script has been written, and a club that spent most of the last decade drifting has found its purpose and identity again. There are some excellent youngsters who have come through and proved themselves Tigers in the manner of old.

In the reckoning, you’d bet on Saracens. They have the experience, they are in better form and when it came to knockout rugby, they were more clinical (bordering on cynical at times) and more dominant against game opposition. Leicester earned their win, but they also were let off by numerous Northampton errors. There was something more indestructible about Saracens’ win.

But whatever. Two great rugby teams, from bottom two two years ago to the two finalists: Leicester and Saracens have been on quite the journey. It’s a fitting finale to a cracking Premiership season.

Still no Plan B?

La Rochelle showed the Bulls how to do it: use the big men. If there’s one thing the Bulls have, it is big men. They can’t say they weren’t warned. And still Leinster were found disappointingly out when it came to varying their plan to deal with the situation.

An anti-climactic season for the team that was being touted as the best club team ever not one month ago comes to an end, next season’s reaction will be their acid test of greatness far more than this one was.

What have we learned about La Rochelle? That they are always stronger later in the game. How do Toulouse solve it? By getting so far ahead that not even La Rochelle can come back. What a first half that was!

The first United Rugby Championship Final will be an all-South African affair: impressive considering how many of the Springbok internationals DON’T play for the two finalists. You’d have got good odds on this being the final in March, but the odds on South Africa retaining the Rugby World Cup must now have shortened considerably. As the saying goes, when the teams from Pretoria and Cape Town are both doing well, SA Rugby is in good health.

Next season’s Champions Cup just got a lot more interesting too; currently French-dominated (and Leinster) but with the South Africans now to join, and with France 2023 on the horizon…