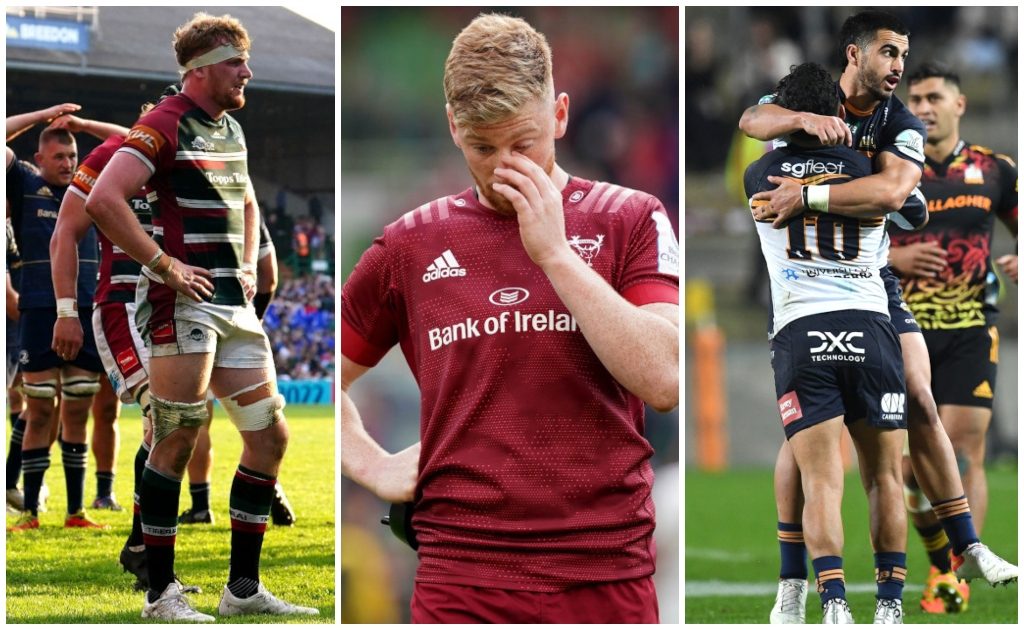 This week we will mostly be concerning ourselves with strategic priorities, penalty kicks and the post-Covid order…

“I’m not going to let people build the manifestation of Leinster being the European giants that they are. They have got to come to our backyard. It’s our gaff,” said Ellis Genge this week in typically bullish fashion. A fair shout for a Tigers player to say, but the bigger landscape is different now and gaffs are more irrelevant.

Leinster went to Leicester’s gaff. They did lay at least a couple of impressions of being the European giants that most say they are; certainly Leicester looked like plucky minnows at times. And with Racing finding an extra gear pretty much everybody knew they had to see off Sale after a tawdry first half, here endeth the Champions Cup – for English teams anyway. Leicester talked an excellent game and they’ve played some excellent rugby this season, but at Welford Road it was men against teenagers.

It should not be lost upon everybody that three of this season’s semi-finalists are French, the same French club foundation that created a team eminently capable of winning the next World Cup (in France) and the same French club foundation that is currently scrapping for bragging rights in a league so tight that you’d be able to place sensible wagers on any of its top seven teams becoming champions (and a decent long shot bet on the current eighth place team, Toulon). The other semi-finalist could have passed for a full Irish Test side, Kiwi imports and all.

Nor should it be lost upon anyone that Leinster’s and Racing’s starting line-ups between them had more than 25 full internationals; Leicester’s and Sale’s only just over half. Racing had five full internationals on the bench. While Leicester’s players had been hammering away against Harlequins in a Premiership bellwether and then ensuring a precious bonus point against Bristol, Leinster’s big players were, by and large, getting nice massages and measured workouts. The difference in freshness between the two sides was glaring in the opening 20 minutes in Leicester, the sheer gulf in squad depth thoroughly obvious in the second half in Paris.

Up to now, the differences between national scene managements and strategies didn’t amount to much, but the deeper professionalism runs and the more learned those at the top of the game in the respective countries are, the more those differences are coming to the fore.

French teams have been far more cash-rich for some time now and have had more pull to star players, but the continued affluence, coupled with the JIFF ruling about developing and including home-grown players in a squad, is reaping rich dividends. In Ireland, the concentration of top players and the careful management of such by the union who pay their wages has not been totally without friction, but has spawned one of the great sub-international teams of the professional era; on the weekend’s evidence, Munster are not actually all that far behind. And on a playing numbers to performance ratio, the national team is a palpable success.

In England meanwhile, a lack of concentration of top player resources and the salary cap cuts – part of a much wider financial quandary in England in which sub-elite clubs this week were described as ‘starving’ – is clearly leaving English teams unable to compete to the end in Europe while the national side just never seems quite to know how to win convincingly despite having many, many good players.

This may, of course, be a cyclical fluctuation. There are enough bright young sparks in English rugby to make you credibly believe that English rugby could be strong like the French in five years’ time. The strategy being pursued has made for a fan-pleasing Premiership (Bath notwithstanding). But while English clubs are forced to cut playing stocks just when others are getting stronger and while the national team continues to be inconsistent despite all the efforts to compensate contributing clubs, don’t be surprised if discontent and disquiet begins to brew audibly throughout England’s top tier.

The tighter games get, the more likely it will become. Already there are far more draws in rugby than there used to be, and you can’t fault either Munster or Toulouse for trying to win. Three tries each, four late drop-goal attempts, one last-kick penalty miss. They needed a crowbar to separate them.

The last time we were here in Europe, you couldn’t fault either Leicester or Cardiff, but the way it ended, with Martyn Williams failing to do something he would never normally have to do after 100 lung-busting minutes, was deeply unsatisfying.

Penalties will never be fully satisfying unless you are a fairweather fan addicted to drama and without a coherent understanding of ruck laws. But at least this penalty drama was decided by kickers who kick for a living. The new format is one that rugby may be able to live with.

The onset of post-pandemic effects

Wales in danger of losing another region and with senior clubs struggling to raise full teams. South African teams with designs on winning the European Champions’ Cup while the Currie Cup is an afterthought. English teams cutting squad players to keep themselves in financial line and with England’s sub-elite game in mortal danger of even remotely resembling a pathway to the top. New Zealand teams looking stale and uninspired – and losing to Australian teams. France looking capable of dominating everything from club to world level.

It’s a different rugby world in the wake of the pandemic. The next World Cup and its aftermath might be the game’s most interesting and changeable period ever.