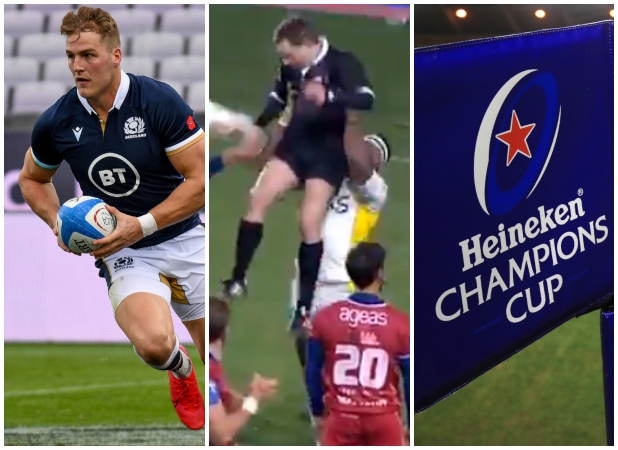 This week we will mostly be concerning ourselves with guns for hire, rank stupidity and the need for clarity in Europe…

This is not a direct criticism of Duhan van der Merwe’s character per se, as there is little doubt that the shady world of agentism has also played its part in his decision to head south mere weeks after qualifying for Scotland through residency.

But the soundbite from – what a coincidence – Van der Merwe’s compatriot, Worcester coach Alan Solomons, about the former’s arrival at Sixways: “…he is also a first class bloke and team man” will be ringing somewhat hollow in Edinburgh, and most likely elsewhere as well.

The move epitomises everything wrong with rugby’s bizarre residency qualification rules at the moment. Van der Merwe moved to Scotland in 2017. He lived there for three years, served an extra year of paid-up patience while the rules were re-written for covid, qualified for Scotland, scored a try in an international match, and has promptly left Scotland without a twitch for England’s Premiership.

He may well continue to play for Scotland as he’s a good player, but is this the kind of player Scotland’s fans and administrators really want? Is there the national passion, the dreams of sending King Edward’s army homeward, the heritage, running through his veins?

It does grate a little that he leaves so soon after qualifying for Scotland, and to a team that has never finished above eighth in the Premiership. For Worcester, he will be a stupendous signing. For Scotland's pro-teams, things will get worse before they get better.

If Scotland are smashed financially because of the Covid crisis and need to make cuts, would this guy be Scottish enough to don the jersey for free like most of his team-mates?

Or is this a rugby gun for hire, cold talent available to the highest bidder, here as long as the cash holds out and the dreams of international rugby don’t turn too sour, ready to go home as soon as the going gets tough?

Time will tell. But the manner in which this has all worked out is a terrible look, as well as a sure sign that Scottish rugby is continuing to struggle against the economic might of others.

We’ve seen some weird and stupid things done by rugby players down the years. That Clermont player who pushed Wayne Barnes out of the way mid-match. Nico Lee’s expulsion of snot onto an opponent’s face at the bottom of a ruck. Andre Watson sending off Balie Swart when the latter ‘showed’ him the red card he had dropped.

But we’re not sure we’ve ever seen anything as stupid as Josaia Raisuqe’s ‘all hail the Lion King’ lift of the referee during Nevers’ win at Beziers on Friday.

It was, at first look, funny – at first look meaning the isolated clip that flashed up in the WhatsApp chat. And were Raisuqe’s trophy-waving antics a part of a social tournament’s wooden spoon finale, it would likely have remained so.

🦁 Now with a Lion King soundtrack. Did he deserve red? 🟥 pic.twitter.com/E2qBsXniK6

But it was not that. It was a parody of a referee who had just made a game-ending decision and made a complete mockery of the pride and professionalism he had taken in his work, not to mention a truly childish, disrespectful take on the ability of non-hulking referees to manage a game played ever more by elephantine monsters, as well as the personal humiliation suffered through the match being broadcast on national TV. A lengthy ban would not go amiss.

What’s on this weekend…

Anybody know? No, we don’t either, constrained as we were by the continued refusal of the EPCR’s leadership to make decisions.

Yes, Covid makes it tough, and yes there are catastrophic consequences either side of the coin. But allowing a decision over the European Cup’s continuance to drag on so long, even after the French government has advised against it, is not good leadership, despite Monday’s announcement.

Look outside rugby: there is a pandemic of unknown proportions sweeping Europe, thousands of people dying everyday, millions worrying about loved ones. Sport needs to go on, but not every single part of it. Clubs can survive on domestic league income, clubs cannot survive if domestic leagues are ruptured because of brief instances of cross-border travel.

The European competitions need to be canned for this season, as soon as possible, just to give everyone a break if nothing else.