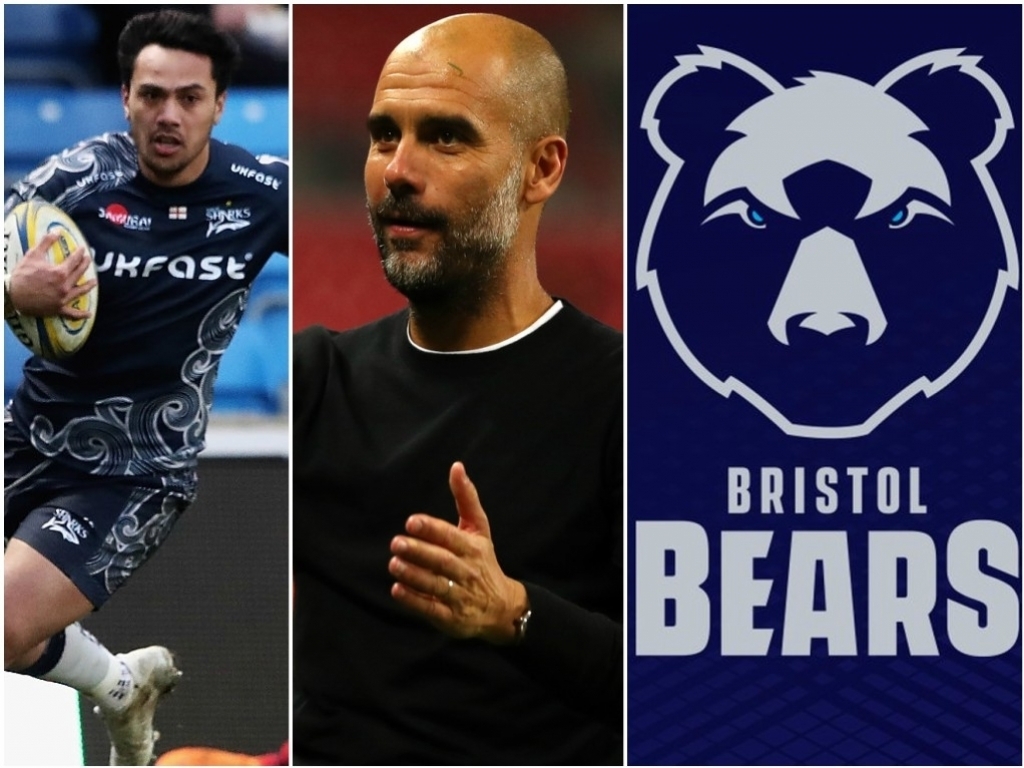 This week we will be mostly concerning ourselves with Sale wing Denny Solomona, the Bristol Bears and what rugby could learn from soccer.

You’ll not often find this column casting an envious eye at our round-balled counterparts, but could you please charge your glasses for a toast to Manchester City.

Pep Guardiola’s footballers have been crowned champions of the English Premier League with five rounds left to spare. In their 33 games to date, they have suffered just two league defeats.

The same pattern of consistent excellence is general all over Europe. Paris Saint Germain are also already champions having been bettered just twice, Bayern Munich wrapped things up over a week ago after suffering just three losses, Juventus and Napoli are battling it out in Italy having suffered just two defeat apiece, and Barcelona are unbeaten in 39 league games.

Okay, we’re blatantly overlooking the fact that a heck of a lot of soccer matches end in a draw. But the point remains that when the fans turn up, they know they are going to see a contest worth remembering. Or, at the very least, they know they will see their players giving it their all.

This alone keeps the turnstiles spinning and the cash registers whirring. Filter out the razzmatazz from modern soccer and you’re left with very basic business sense.

Now shake the bling from your eyes and return to our game.

Exeter lead the way in England despite defeat in a quarter of their games to date, including a loss at home to Worcester, who are yet clear of relegation. Saracens could yet pip Exeter to the top spot despite six league defeats, including reversals to the likes of Quins – currently 10th with seven wins from 20.

In France, the top three have all lost eight league games apiece, whilst Toulon somehow hang on to fourth place having lost 11 of their 24 games.

And over in the PRO14, Munster are cruising despite having lost seven of their 20 outings. But no side has scored more points than Leinster, who lost to Benetton at home at the weekend. And the Scarlets are surely destined for the knock-out stages, despite shipping over 50 points to Edinburgh on Saturday.

Northampton Saints stalwart Tom Wood bared all in an interview with BBC Radio a few days ago. Asked to reflect on his proud club’s maladies since they hoisted the Premiership trophy but four seasons ago, he said this: “On the back of winning it, people downed tools and thought we had the winning formula.”

He’s right, of course. But you would have thought his stark confession would have sent keyboards a-tutting across the rugby world. But as far as Loose Pass knows, this is the first written account of his confession outside the BBC.

The sad truth is that rugby fans are too accustomed to their teams ‘downing tools’, if not for seasons on end as in the case of the Saints, then for the odd game here or there.

This is exactly what Leinster, Scarlets and Racing did at the weekend ahead of this week’s European semi-finals; this is what all clubs and provinces are forced to do during international windows. It makes a absolute mockery of the leagues – and the fans.

Yes, we’re back to our old bugbear of ‘too much rugby’. So let’s just say this: as the blazers convene to map out rugby’s medium-term future, they should consider how soccer manages to generate the levels of finance they so obviously crave.

Given the erosive nature of rugby, we’d concede that ‘consistent excellence’ is an non-starter. But let their discussions revolve around one simple truth: fans only pitch up in large numbers when their teams do.

It’s been touched upon elsewhere on Planet Rugby, but Loose Pass would like to add its own dismay over the four-week suspension handed to Denny Solomona for an alleged homophobic slur.

Now, it so happens that this correspondent has done a fair bit of court reporting, and this is the very first time he’s felt it prudent to use the world ‘alleged’ following a verdict. And he will continue to use ‘alleged’ for one very good reason: bar the alleged ‘victim’ – Worcester Warriors fly-half Jamie Shillcock – no one heard the fated word being uttered, and not one of the many microphones within the ground picked it up.

What’s more, Shillcock didn’t want to take the incident any higher than the referee, and both he and Solomona shared a hug after the game having both apologised: the former for pulling the latter out of the tackle area, the latter for reacting angrily to this illegal removal.

But the RFU pressed on with the case, eventually ruling that one man’s word was more valuable than another’s.

Incredibly, the fact that Solomona showed “no remorse or apology” for using a word he claims he did not utter appears to have counted against him! And that’s just one of the amusing lines from the RFU’s 13-page report on the matter – fans of Franz Kafka should put it top of their reading list.

But jokes aside, what kind of precedent does this set? Rugby is no longer a gentleman’s game – financial considerations rule each and every elite fixture. And if it has become this easy to deprive opponents of their best players, who could possibly resist?

Grin and bear it

We thought we’d sussed it. On receiving Bristol Rugby’s latest press release, we figured that some guffawing PR officer had mistakenly added an extra digit to the dateline. But it turns out the message wasn’t slated to run on April 1 –  the famous old club really does have a new name: they are now the Bristol Bears. No joke.

How wrong we were.

Explaining the rebranding, club owner Stephen Lansdown said: “We have to be prepared to break the mould and be relentless in driving the progression of this rugby club. In a challenging market, in order to attract investment and new audiences, we must be brave in our vision.”

That vision involves forging a fresh identity, with Lansdown admitting being “tired of hearing about Bristol’s status as a ‘sleeping giant’” –  apparently totally oblivious to the fact that bears are exactly that for almost half the year.

Loose Pass isn’t totally against rebranding exercises. We’re not that fuddy-duddy (yet). Regardless of what we must now call them, we wish the Bears all the best as the prepare for another tilt at the top flight.

But we really, really would like to know what the heck bears have to do with Bristol asides entry-level alliteration.

Yes, yes – we know tigers never prowled around Leicestershire, but at least there’s the stripes.

So let’s see if we can come up with a more appropriate moniker for the Premiership new boys. Our starter for ten: the Bristol Dockers. See what we did there? A marriage between old and new. And if alliteration is a deal-breaker, how about the Bristol Buccaneers, or even the Bristol Blackbeards?

So hit us with your suggestions below, and let’s see if we can catch Lansdown’s eye. Who knows? It might even set you up for life – you’d have no idea what sort of fees PR agencies charge for this sort of nonsense!