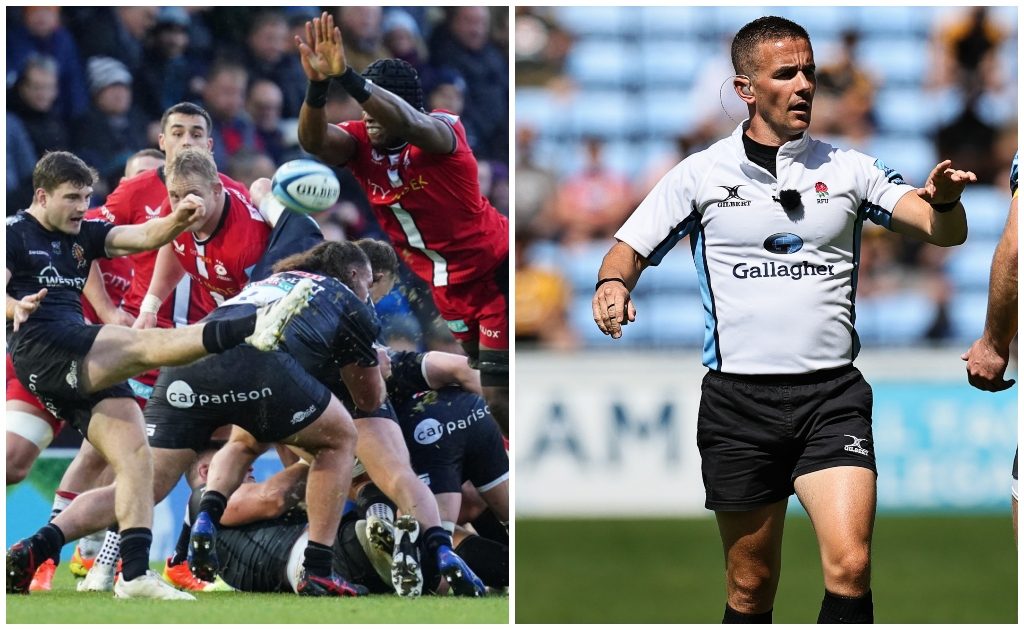 This week we will mostly be concerning ourselves with caterpillars, chokes, harsh words, mauls and subs…

There was some excellent rugby around this weekend but, interspersed with the flowing moments such as Bordeaux’s brilliant try against Toulouse, La Rochelle’s even more brilliant second try against Stade Francais, Harlequins’ catch-up try at Leicester or Exeter’s furious scrap with Saracens, there were far too many moments of game-play, at which those examining how to make the game more attractive cannot look, and find a way to outlaw, soon enough.

We start with Saracens. What do we call it – the crab ruck seems too docile. The scorpion, with it’s curved tail and unpleasantness carried within? Commentator Nick Mullins came up with the ‘counterpillar’, which seems extremely apt, given the eyesore it is set up to counter.

Get rid of them both. We’ll grant that one of rugby’s beauties to the insiders is the remarkably complex and chaotic set of laws governing the game, through which all manner of loopholes can be picked and found and exploited. And this was all well and good when rugby just was happy bumbling along in its amateur niche.

But if the game really does want more people, more coverage, more money, more new fans and everything (and it’s debatable at times whether that really is what rugby wants) then it needs to react better.

The caterpillar ruck has been around for a few years now, during which the only people genuinely liking it are the scrum-halves being protected by it and perhaps the forwards who get a breather. Referees exasperatedly call ‘use it’ while second after second is wasted as the scrum-half pokes the ball gingerly backward, but barely ever actually implement the ‘use it’ rule which is supposed to promote quick play. Nigel Owens famously once refused to tolerate it, but few of his successors seem so strong-willed.

And if the one good thing about the counterpillar is that it might one day stop the caterpillar, the rest of it is clearly against every aspect of ruck gate formation, offside line-drawing and whatever else you might like to add into the mix.

Allow a scrum-half to only play the ball with his foot once and allow no rucker beyond the offside line to attempt to tackle or charge down. There, problems solved…

It’s not just in the think tanks of the Premiership where trickery is being dreamed up it seems.

The clip currently doing the rounds is of the four Japanese players trying – failing – to strip a South African player of the ball while holding him upright so the South African can’t get a knee on the ground and claim a tackle, and while the South African’s team-mates stand off it all and leave them to it so no maul can be called. It is amusing on the one hand, but a bit pathetic on the other.

Veterans of such clips may remember a French league game a few years ago where two packs stood off each other after a line-out, one ready to form an attacking maul, the other standing off so no maul would be formed so they would not be bound by its rules.

So they stood there, snarling at each other, until the referee got sick of it and very sensibly blew for a scrum. Funny once; fortunately it has not become a tactic, with the loophole that was being used cleared up quite quickly – if only they’d sort out the caterpillar that quickly.

This had all the same elements. Funny briefly, but after a few moments what you really felt was best expressed by Joe Marler at an Exeter caterpillar a year or so ago: “Come on, you’re ****** boring me!”

The solution? Only one player from each team needs to be involved for it to be a possible maul?

Referees have, however, been cracking down elsewhere. It was deeply refreshing to see Luke Pearce marching on and on when Billy Vunipola refused to shut up, and Mr. Pearce was not the only one around Europe this weekend.

But the best one was in South Africa, with Jaco Peyper not only telling Bismarck du Plessis and Bongi Mbonambi to be quiet, but also delivering a genuine, stern, almost paternal ticking off about respect and living up to the honour of the men they are:

“The both of you, you speak to the officials at the moment, like you have no respect for us,” he said.

“It’s both of you. I know you’re big characters and good players, both Springboks, so please, come back to your values.”

Great stuff, so powerful in fact, that even the television commentators, who had not been shy about disagreeing with a couple of Mr. Peyper’s calls during a somewhat bitty match, sounded humiliated and ashamed!

Oh, and the maul thing

Here are two mauls that resulted in tries this weekend.

One by Exeter. Clean, efficient, the maul moves as a single body, drives over the line and a try is scored. Here, at 3:00

A good example of a maul.

And then there’s this, at 1:25. There are several aspects to it, but particularly the part at 1:42… can anybody explain to me how this is not obstruction? How nine is bound? How this maul has anything to do with the good example from Exeter above?

There are far too many of the latter and not enough insistence on mauls looking like the former at the moment.

Staying on that latter clip, and continuing on a theme of getting rid of ugly, irritating spectacles, and also cognisant of how many agreed with last week’s assertion that taunting ought to be punished as well, this business of substitutes running from outside the field of play to celebrate tries…