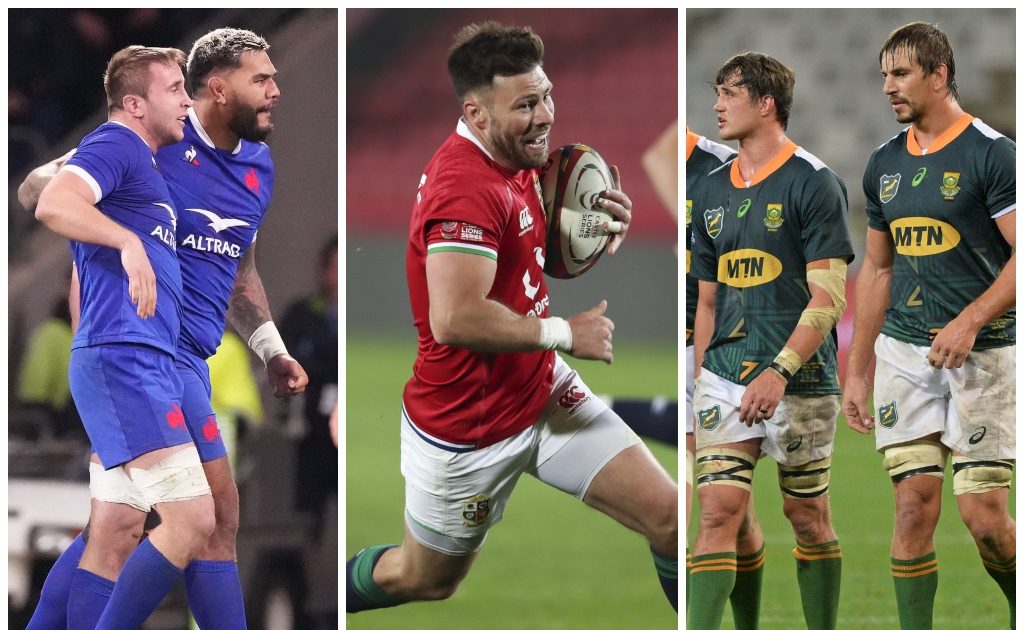 This week we will mostly be concerning ourselves with the British and Irish Lions and the slow, sure emergence of an unwelcome trend…

Another winter front has apparently been blasting Cape Town over the past 24 hours, a region that has already suffered its fair share of rain damage this winter. Most notable among the weather warnings were the ones of damaging waves, difficulty of navigation for small vessels and local capsizing.

It’s difficult not to think that a similar forecast has been taking place in the Lions’ analysis rooms over the past couple of weeks. The match against South Africa ‘A’ – with the ‘A’ functioning more as an ‘eh?’ when you ran an eye over the line-up – ensured that we should suffer no illusions as to what the hosts of this tour are going to bring tactically to the series. High balls will rain down, there will be massive green waves of pressing defence. The visitors will need to steer their ship well.

But if the A-Team match and the Boks’ Saturday warm-up defeat to the Bulls has shown one thing, it is that the hosts might be undercooked in terms of simple 80-minute durability. They did not manage a point in either of the second halves, and while the A-team defended gamely against the Lions, the back-ups were less good against the Bulls.

Which all begs the thought – and cast your mind back to the Rugby World Cup as well – how might the host team be able to react if it heads into the last half-hour a few points adrift? And if, as we have considered, the answer to that question is: not too well, how might this affect Warren Gatland’s selectorial thinking?

There are a host of players in the tour party considered to be ‘wild cards’ – think Finn Russell and by extension Marcus Smith, or Gareth Davies, or Josh Navidi, or Elliot Daly – who might be able to open up a game. There are also many – think Conor Murray, Dan Biggar, Owen Farrell, Courtney Lawes – who are considered stable picks on account of their ability to keep a game watertight and wear down the opposition for the wild cards to finish off.

Of course, the ideal selection is a blend of both, and there’s no shortage of players with the ability to both hold a game tight and blow it open, Liam Williams, Taulupe Faletau, Anthony Watson, Tadhg Furlong…

But the debate here might centre on strategy. Assuming the Boks are undercooked in terms of match fitness, might there be a strategy emerging where the Lions target an early lead and let the hosts run themselves out trying to catch it? And would that strategy then involve putting in a couple of wild cards to start instead of finish?

Ali Price at scrum-half, for example, would be one such, with Price having been by far the most lively scrum-half on tour. Chris Harris at centre might be another.

All of the players at Monday’s virtual press briefing were at great pains to remind all that being good is simply not enough against South Africa, there’s no point in doing anything unless you can win a physical battle. Wild card players are not always apt to do that, which is the glaringly obvious counter to the argument made here. Gatland is nothing if not pragmatic and of course, there is also the consideration that if the Lions can hold on physically for the first hour, there are enough game-changers to take advantage of the fatigue late on.

Yet it is whether holding on is enough. South Africa seem unable to chase a game, but they can defend a lead. Much may rest on how well the Lions can start, rather than how well they can finish.

With so many unique factors in the mix, including the potential return of the captain who has played only 30 minutes of rugby in the past month, this will be one of the most intriguing Lions selections ever.

Last week this column was perhaps mildly dismissive of the tour in general. The intention was not to do it down, merely to point out that, rather than being the centre of attention both for all involved and for all looking in as it would normally be, the circumstances surrounding it might have pushed it down the priorities a bit.

For some fans, that’s quite possible. But Loose Pass was reminded succinctly by a Stormers coach this week that this is not the case for the players.

When asked whether going into a bubble for eight days – including a last-minute four-day extension because of the switch of the ‘A’ game – was worth it to play a game of rugby amid widespread civil unrest and a deadly pandemic, the response was curt: “To play the Lions? Every single second.”

When asked if there was any form to note from the Springboks, the response was equally fat-free: “They did a full-contact training yesterday. It was a bloodbath. They wanted to kill each other to make the Test team. Crazy stuff.”

The 80 minute aspect remains a doubt about South Africa, but do not believe that nearly two years of no international rugby has softened their attitude…

Having recently had half an eye on the Euros, it was easy to spot. The moment of scanning before the fall, the motionless position on the ground with face covered. The guilty glance around as the game stopped to check who’s concerned.

Anthony Jelonch’s performance after Marika Koroibete’s thunderous hit was pretty poor form. Granted there might have been some collateral contact with his face, but in any universe a hit from Koroibete at full tilt to the head would have seen Jelonch down for a lot longer.

Two immediate aspects to it in the same game: firstly, Michael Hooper was absolutely justified in seeking an HIA for Jelonch for the reason espoused above. Secondly, when Baptiste Couilloud steam-rolled Tate McDermott for his team’s first try, heading into the latter’s tackle forearm first, would McDermott have been wise to drop to the ground, cover his face, and let the disciplinary make its call?

Given all the sensitivity around contact to the head, HIA, tackle heights, speeds into contact and such, referees and officials have it tough enough without players going all Raheem Sterling to get penalties and cards against the opposition?

Most of all though, heaven help us all if rugby pros start diving.