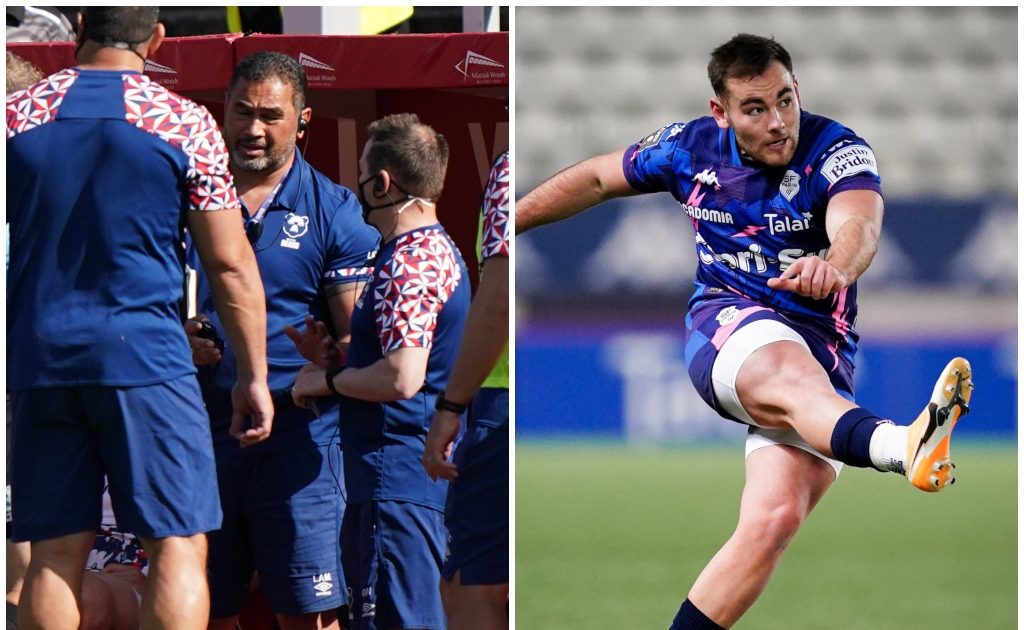 This week we will mostly be concerning ourselves with skulduggery off the pitch, skulduggery on the pitch and a thrilling weekend in France…

It’s not been a great week for rugby’s arcane systems of ensuring that nobody pulls fast ones or that no indiscretion on pitches brimming over with them goes unnoticed.

It is difficult to understand how Pat Lam, John Afoa and/or Bristol can escape censure for the fiasco at the end of the Leicester-Bristol game.

Mr. Lam lied, and lied hard about Afoa being injured and unable to come on to the field, before realising that he would be another man short as a result and then backpedalling faster than an aardvark which had mistakenly stuck his snout into a hornets’ nest.

The rules about substitution cards are there for a reason, as are the rules about losing a man should the game go to uncontested scrums: namely that both systems have been exploited before. This time the system worked, catching out an exploiter seemingly unaware. But it’s a poor look for the game that such a system ended up in such a bitter and petty dispute.

Back to Wales, and the Cardiff Blues once again were caught up in captain’s challenge controversy in the PRO14 Rainbow Cup.

The second half of the Blues-Zebre game lasted a ridiculous 67 minutes, with an even more ridiculous 23 of those spent waiting while TMO Ian Davies was called upon to adjudicate on seven captain’s challenges.

Mr. Davies might have been found guilty of betraying emotions a little, but he summed up quite succinctly the immediate feelings of all those watching when he said: “and now they’ve both lost their challenges, thank God!”

Edinburgh head coach Richard Cockerill also gave a succinct summary of a majority’s considered view of the captain’s challenge after his team’s two hour-long (remember, rugby is generally an 80-minute game) match against Ulster: “It’s a disgraceful thing to use. All you’re doing is getting one team trying to ‘Judas’ the other team to get blokes sent off the field… The officials are there. Are we saying we can’t trust the officials? Well, don’t have the referee, we’ll just ref it ourselves and it will be much better fun.”

Meanwhile, even in the Championship it seems Saracens are still nursing damaged pride.

The cancellation of their game against Hartpury after a Covid outbreak at the latter meant that Saracens finished second overall in the Championship rather than first.

Which mattered not a stuff to anything really, as Ealing and Saracens had already agreed on who would play the promotion play-off at home first, presumably for the abominable reasons of television scheduling outlined in this week’s ‘Hot or Not’.

Yet Saracens are mulling appealing the decision (they have until June 11), presumably on the grounds that they believe they should finish top, also presumably on the grounds that, should there be a similar game-cancelling scenario affecting the play-off, top spot might carry a default advantage in terms of promotion. It’ll be interesting to see how well their re-promotion is safeguarded.

But boy oh boy, it’s been a pernickety week in rugby.

The quality is not always up there and there are many doubts still about teams’ attitudes on the road during the slog, but the Top 14 doesn’t half do finales well.

The weekend past saw all the final games of the season kick off at the same time, with a conference channel enabling the viewer to follow in granular detail the constantly-changing permutations of play-offs.

There were a couple of irrelevant games, but elsewhere there was tension aplenty, with Stade Francais burgling the last play-off spot by a nose from Castres despite the latter’s impressive bonus-point win over a disappointing Toulon.

The Parisians’ win over Bayonne consigned the latter to a promotion-relegation play-off against local rivals Biarritz which is likely to be as fiery as any Basque derby down the years.

Then there was La Rochelle’s nerveless late penalty which ensured a losing bonus-point in Clermont and thus a week off, while Clermont clung on to the win which ensured they did not go the same way as Toulon.

Tension to the last. A Paris derby now awaits in the championship play-offs, while Bordeaux against Clermont should be a cracker.