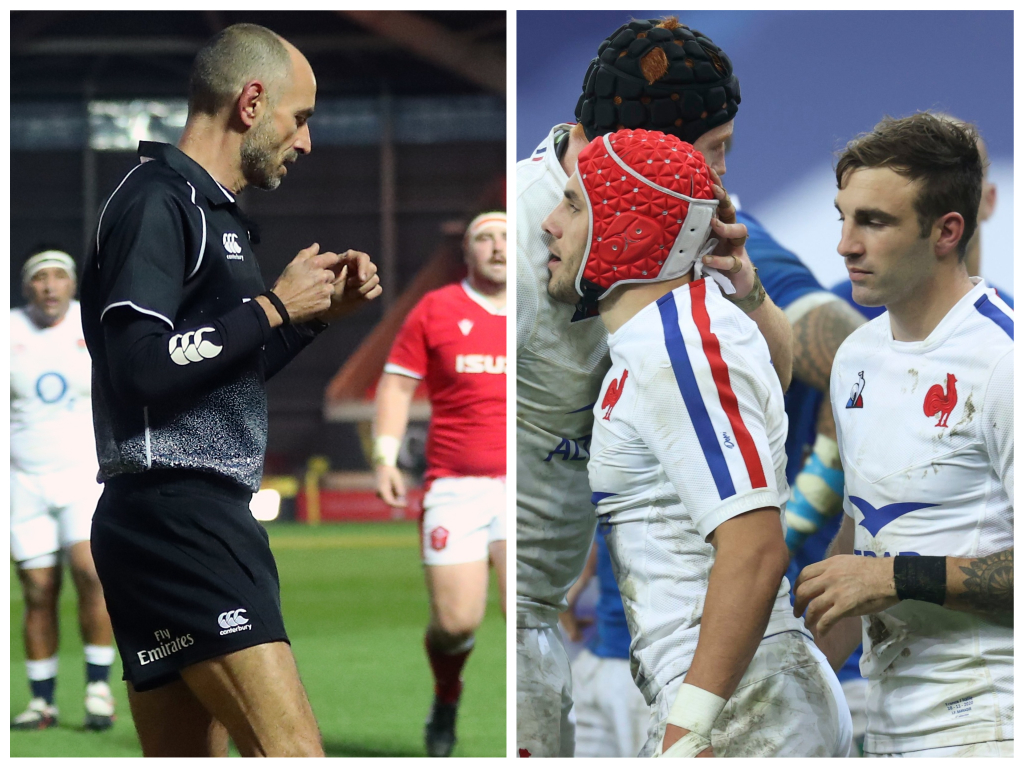 This week we will mostly be concerning ourselves with the balance between communication and initiative, between too much and not enough, between red and yellow and between open and closed…

The team that had the worst day

The problem, we suspect, started earlier in the game, before Dan Biggar jumped to claim the high ball. The problem was started when a thoroughly needless piece of interference came from video referee Brian MacNeice regarding Biggar’s charge-down of Henry Slade’s kick in the build-up to Wales’ first try.

How anyone might have suspected a knock-on there is beyond us. But Romain Poite was visibly irritated with that interruption, and a couple of extra moments of voice in the ear stuff from players did not help him rediscover his mojo.

So a few minutes later when Dan Biggar was taken out in the air and the TMO piped up with not even a recommendation, but a very clear “he was tackled in the air,” Mr. Poite’s determination to ignore all intrusions and referee the game himself quite clearly took over. “No, no, *unintelligible* happy to play on,” was his call. A minute and several phases later, England were over in the corner.

"I wasn't happy with the first try of England where Dan Biggar was clearly taken in the air."

Wales head coach Wayne Pivac says they plan to complain to World Rugby over the refereeing in their defeat to England in the Autumn Nations Cup.

Not that Mr. Poite had a good game – and Wales were very much on the rough end – but the debate about how many referees we need actually had surfaced earlier in the week, with Nigel Owens saying: “We need to get back to the referee actually refereeing the game and relying less on the TMO.”

It’s not a totally wrong assertion and certainly it was one that, once the TMO had been refuted once, Mr. Poite seemed determined to be a standard-bearer for. The lack of review for Elliot Daly’s tackle on Josh Adams, for example, was flabbergasting in the current climate, but maybe by that point Mr. MacNeice had given up. Certainly for the rest of the game, the communication channels between TMO and on-pitch referee were very poor.

Wales had good cause to feel aggrieved about a number of decisions, although given the statistical advantages held by England in many facets of the game, the result was unlikely to be any different.

Nor is this a focussed criticism of Mr. Poite, rather that the one pertinent lesson we feel needs to be taken out of this is that when the chemistry in the officials team is not working and they stop gelling, that team has a bad day too.

A sorry state of affairs

England’s next challenge will be France, a mouthwatering clash and a pumped-up England’s chance for revenge for the Paris defeat in February.

Except it is not that, it will be England once again bruting their way to a comfortable victory against a France side that could be the most inexperienced in Test history, because the French clubs have an agreement in place that their players can only play three internationals this November.

We get that many players are overplayed and we certainly defend the rights of clubs to stop national sides weakening them week in and week out by nicking all their best players. Compensatory cash goes only so far for that.

We also get that this Nations Cup has been a useful money-spinner at a time when unions such as Ireland and Wales were facing financial ruin, not to mention a boost for Georgia.

It’s tough to balance out. But looking at France’s dilemma, the really pertinent question might be this: how much of a waste of time does that friendly against Wales in early November seem now, when a piece of silverware to be nicked off England is up for grabs but the players are all played out?

Maybe this is a watershed moment that ensures that meaningless fixtures are kept to a minimum in future. Hopefully – and hopefully the broadcasters who will be less than ecstatic about the situation on Saturday are forgiving…

Returning to the incident with Daly and Adams, and also Tyrel Lomax’s yellow card against Argentina, we can quite justifiably ask: where’s the consistency in the officiating at the moment?

Daly’s primary point of contact was with Adams’ chest but he clearly slipped up and hit Adams’ chin, he barely wrapped and he was nowhere near as low as he should have been.

As for Lomax, the decision is even clearer cut: no wrap, a swing of the arm, a forearm into the jaw of his opponent.

Why isn’t that a red? pic.twitter.com/XsIxeFmksg

The irony of course, is that last week we were lamenting the officials for being too hard on unavoidable clashes and now we’re lambasting them for not being hard enough.

But in both of these situations, the momentum and decisive actions are clearly with the offenders: Daly is running in to tackle Adams who has just caught a high ball and is more or less stationary, while Lomax is a textbook swinging shoulder clean-out on a prone player. One is a stonewall penalty and yellow card, the other an obvious red. Indeed, comparing Lomax’s yellow to the red card for Ofa Tu’ungafasi three weeks ago is almost comical, while compare Daly to Tu’ungafasi and… well… Daly could be a lucky chap.

We have TMOs, and video replays in stadia for referees to watch, in place to make such decisions better and more consistent. It’s not happening at the moment.

A welcome move into the 21st century

Open electronic voting! No more deals in the shadows, no more governing body recommendations for the council to rubber-stamp! Just a simple, open democratic process of people analysing bids, weighing up the benefits and making an independent decision!

Sounds idyllic, probably is idyllic rather than realistic, but World Rugby did at least move closer to it with the change to regulations in voting for World Cup hosting rights this week. A laudable move – hopefully the first of many.