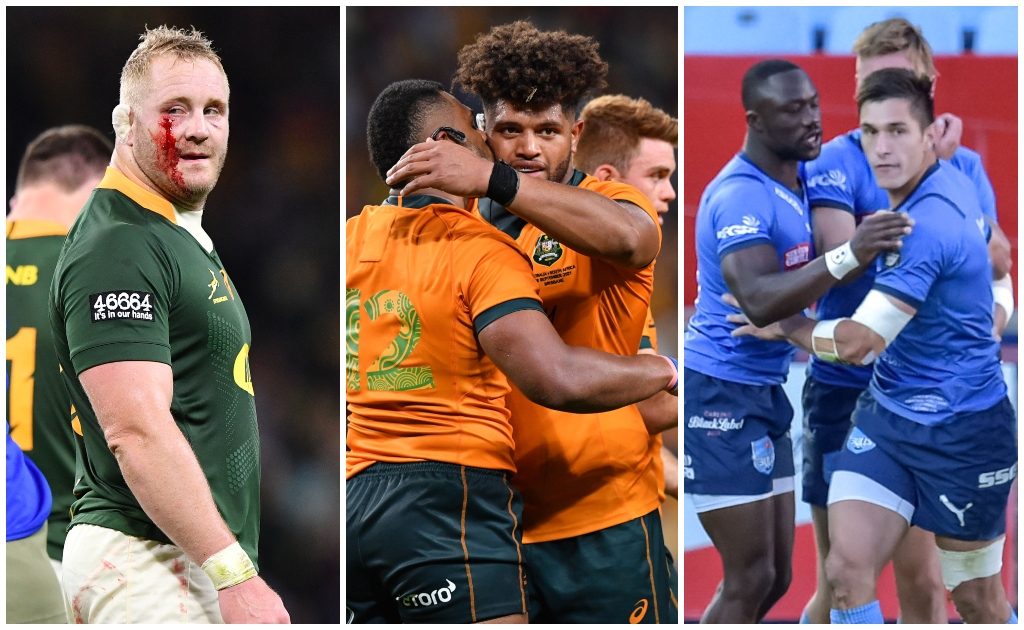 This week we will mostly be concerning ourselves with the benefits of a few beatings, the disadvantages of a siege mentality and the onset of a fascinating new tournament…

Losing against the best doesn’t make you the worst

If ever there was a team that had been roundly dismissed as being useless yet is, in fact, rather good, that team is Australia. The Wallabies have taken some horrible shellackings down the past couple of years, largely on the basis of the opposition they’ve been playing. The wails and catcalls in from the sidelines have risen in both volume and quantity.

Yet the overall record doesn’t read all that badly since the last World Cup. Played three, won two against a reserve, yet immensely talented, French team. Two draws against Argentina – that’s the Argentina that beat New Zealand. A win, a draw and five defeats to New Zealand is not a good look, yet there are not many international teams around with a better record against the All Blacks over the past seven games. World champions South Africa, for example, have exactly the same record.

Pretty much anyone who has played the game will have taken a couple of formative beatings at one time or another. Loose Pass is fortunate enough to have taken them both in the northern hemisphere and the southern. Different sorts of beatings too: up north you tend to be steam-rollered into the mud, down south you tend to find yourself flailing around clutching at thin air in the wake of the tornado that just shot past. Sometimes it’s simply a case of understanding that there are other, better specimens of rugby player than yourself.

But many other times it is a case of seeing opponents at a level up from where you are, yet at one that you know you can attain.

This, without a doubt, has been Australia’s torment and motivation over the past couple of years. Cocooned into their bubble by the pandemic, the Wallabies have taken beating after beating from their nearest neighbours without, France Tests excepted, the recourse of being able to measure themselves against anybody else.

Yet they play with freedom. The Wallabies have at times been relentless attackers. It’s often been ‘in the wrong parts of the pitch’ and it’s often been ‘just a pass/cleaner/timing short’ of being right, but this is not a side that has reverted to numbers rugby to re-bear itself and pick itself up. Instead it continues to score, to stretch defences, to go for gaps. It continues to match itself against the team that has given it the most punishment and rise to that level.

So then came both the weekend past and the one before it. With world champions and Lions conquerors South Africa as the opposition, the Wallabies have not missed a beat over the past fortnight and have stuck to their chosen path. If last week’s win was tinged with fortune at times, this one was every bit earned. 30-17 is an impressive score, four tries to one is even more impressive and in no way an inaccurate reflection of Saturday’s game.

It may take more time to get to the level the All Blacks are currently operating at, but to dismiss this Australia team is to do it a disservice.

The problem with a siege mentality is the drop off. Cultivating an ‘us against the world’ situation can create tremendous strength within a tight unit, but it looks desperately weak when that unit misfires.

Which is where South Africa is stuck right now. Over-reliant on a game-plan both restrictive and frustrating, the team which once looked a total greater than the sum of its parts is now looking disjointed and with previously high-value parts looking decidedly mid-range. The scrum has become an area of weakness, as evidenced by the existence of yet another enquiry about the officiating. In an open game such as Saturday’s, both backs and back-rows looked well off the pace, both in terms of skill and speed of thought.

It is no easy task, heading to the other side of the world for two months to play a tournament, living in a hotel bubble. It has also been a long, long season for the Springboks, complicated further by the unique challenges facing the country because of covid.

Yet there is also an unquestionable air of staleness around the team, a tactical rigidity which they will not shake, a recourse to petulance and remonstration when the close calls do not go their way, an inability to regroup independently. The weekend coming, facing the team that has now knocked them off their number one perch, will spell the team’s sternest Test of rugby resilience yet and the Boks do not look in good shape.

Although those in Ulster may beg to differ about what the most exciting storyline is, much of Europe’s rugby public may be watching on with curiosity over the next few weeks as the first-ever tournament featuring top-level north v south club/province/franchise fixtures gets underway.

There is little better way to start than pitting the current PRO14 champions and multiple European champions Leinster against the Bulls, fresh from their Currie Cup triumph, while the Sharks are the first to taste the heat of a (probably) full house at Thomond.

With European Cup (a name that might need a rethink soon) qualification on the line and multiple journeys into the unknown for many of the players, it’s set to be a terrific learning experience for many, while there will be some fascinating match-ups as the season builds towards the business end.

A shame that the start sees the teams so depleted, but here’s to hoping it works, for if it does function, it will surely serve as a crucial step towards the ability to create a fully integrated global calendar.