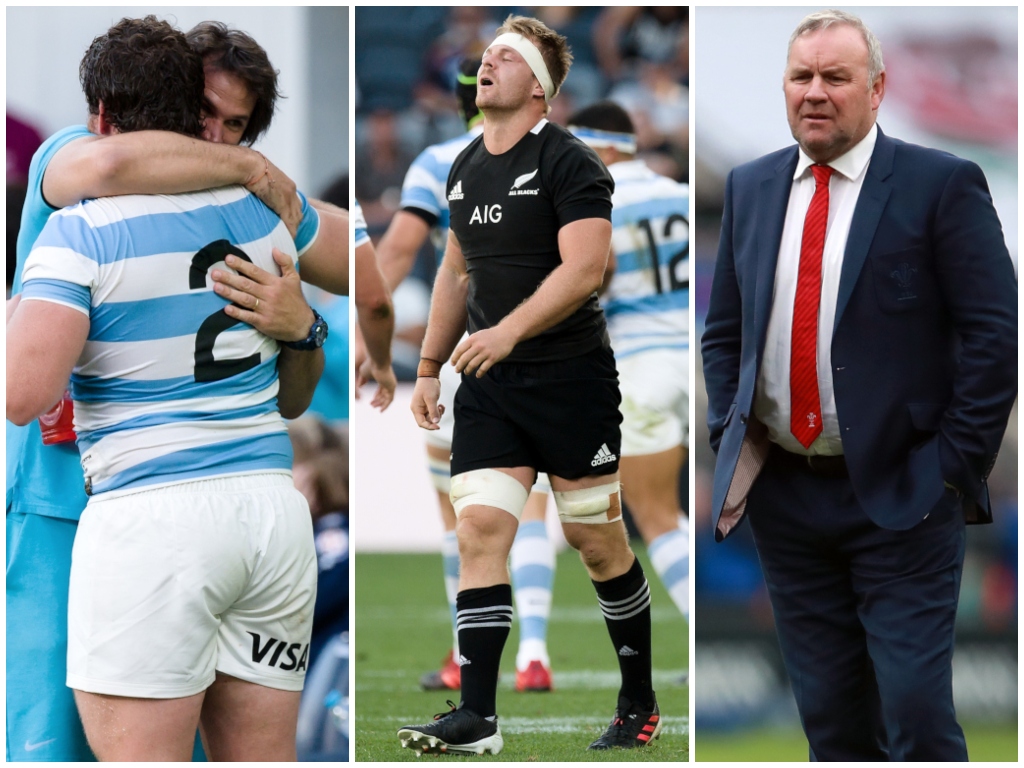 This week we will mostly be concerning ourselves with Amazing Argentina, All Black leadership problems and Wales’ identity crisis…

One of the better memes to emerge from this weekend was the super-imposition of Pablo Matera’s incredulous face as a response onto a quote insisting that South Africa’s players would need 4-500 minutes of rugby before they could safely compete in the Rugby Championship.

Other good ones featured Mario Ledesma’s tearful little moment in the coach’s box, the small party the Pumas had with their fans in the corner of the stadium long after all others had departed and, of course, the one about the Pumas training by running circles around their own flats and throwing balls to relatives on roofs, while New Zealand’s players pummelled their way through Super Rugby Aotearoa.

Memes are what they are, but no meme could come close to actually capturing the size of the shock Argentina pulled off on Saturday. Nor the sheer scale of the obstacles they had to overcome. With respect to Japan, it dwarfs even Brighton 2015 on the upset scale.

The Pumas made only one handling error in the entire 80 minutes, a statistic so anomalous to norms that it recalls the outlandish French statistics when they beat New Zealand at RWC 2007. After 50 minutes, with New Zealand briefly looking set in their rhythm, commentators opined that the last 20 minutes would be crucial, that Argentina’s hardness might fall away, that New Zealand would have the legs and skills left.

It never came. Argentina’s defence relentlessly rushed, reset and rushed again. Tackles were accurate, stealers lightning fast, bodies, said before the game to not be battle-hardened, withstood the onslaught. Kicks were well-chased, space was closed down and all opportunities were taken. It was a remarkably ruthless and controlled performance for a side that has had to withstand so much even before New Zealand hove into view.

Many had also reckoned that the pandemic would set Argentinean rugby back a good few years, pulling the money and exposure out of the game. This win will bring all those lost years back.

When the Pumas conquered Twickenham for the first time, Agustin Pichot famously gathered his team together at the final whistle and asked them all to take 10 seconds, just to think about what they had achieved and consider the enormity of the moment. There was no such reflection in the immediate aftermath in Parramatta but, over the next couple of years, and especially if the Pumas kick on and manage to do the same to the Wallabies on Saturday, there will be a lot of reflection back to this match and the long-term significance it may end up having. A remarkable achievement.

The knives are well and truly out for the coaching staff and captain. More memes, mostly of Scott Robertson (one particularly cutting one has him holding up a red cap with ‘Make All Blacks Great Again’ written on it), are doing the rounds, while the fans are well and truly restless. ‘No plan B, no management, no mana even’ said one to me, while another hypothesis on social media examined whether the focus on skills, so long New Zealand’s central philosophical pillar, needed a rethink.

Another more neutral observer, himself a current pro, rewatched the game after and reckoned that much of what had just happened was down to sheer tiredness.

Not a totally baseless assumption. So much was made of Argentina’s hardships that it was easy to forget that New Zealand’s players are coming to the end of a very different season, one that has also presented mental stresses, perhaps even one that has been more physically taxing given the intensity of Super Rugby Aotearoa and the endless Bledisloe series. A reason – not an excuse, but definitely a possible reason.

Yet the claim for no leadership also has merit. So much of New Zealand’s team culture since 2004 has been based on the leadership group of players in the side: the established players, older heads, carriers of the All Black mantle and tradition and educators of it to the youngsters.

Who were the leaders on Saturday though? Sam Cane did not manage the referee well. Sam Whitelock was strangely subdued. Dane Coles, an old head in the team now, was the one petulantly slapping opponents’ faces and giving away cheap metres. Aaron Smith did what he could (he actually played very well) but over the whole team there just didn’t seem to be enough people stepping up.

Sir John Kirwan was visibly furious on TV when Ian Foster suggested that his side had just been beaten mentally, but Foster was right on the money. Matera captained better, Nicolas Sanchez directed better, Tomas Cubelli distributed better and the Pumas always looked to be pulling together behind a few key players.

Ian Foster has a few fires burning at the moment, but the in-squad leadership is perhaps the one burning hottest.

A passionate Argentina outfit has orchestrated one of rugby’s biggest-ever boilovers, @lospumas beating the New Zealand @AllBlacks for the first time in their history.#TriNations2020 #NZLvARG pic.twitter.com/T2AxRbCmn8

Social media again: Not much has changed for the Welsh since this column last reviewed them, but one bright spark on Facebook summed it up best when he said: ‘He (Wayne Pivac) either needs to adapt his game plan to the players he’s picking, or pick players that suit his game plan.’

The old guard, with one or two exceptions, simply is not fitting into Pivac’s plan at the moment, and he might save his own bacon by accelerating Wales’ ongoing generational shift.

Turned up to the wrong film?

It cannot be easy being a salesperson for some of rugby’s tournaments. Even the Rugby Championship is victim to squad rotation on occasion, while most of the club tournaments around the world are subject to having the best teams eviscerated by international call-ups.

Yet the weekend past must have left some such salespersons feeling a little… unfulfilled. England’s win over Georgia was mind-numbing – not least England’s clear and obvious intent to use it as a practice game for the less aesthetically pleasing aspects of rugby, rather than actually going out and playing.

France’s game was covidded, Scotland’s win in Italy was scrappy and Wales’ defeat in Dublin was only marginally better than the game at Twickenham. Not one of the above was graced by so much as a fan.

Add that to the fact that the person you’ve sold the screening rights to is not aware of the difference between Ireland and Northern Ireland and you’d be forgiven for wondering why you’d bother. What a time we live in.