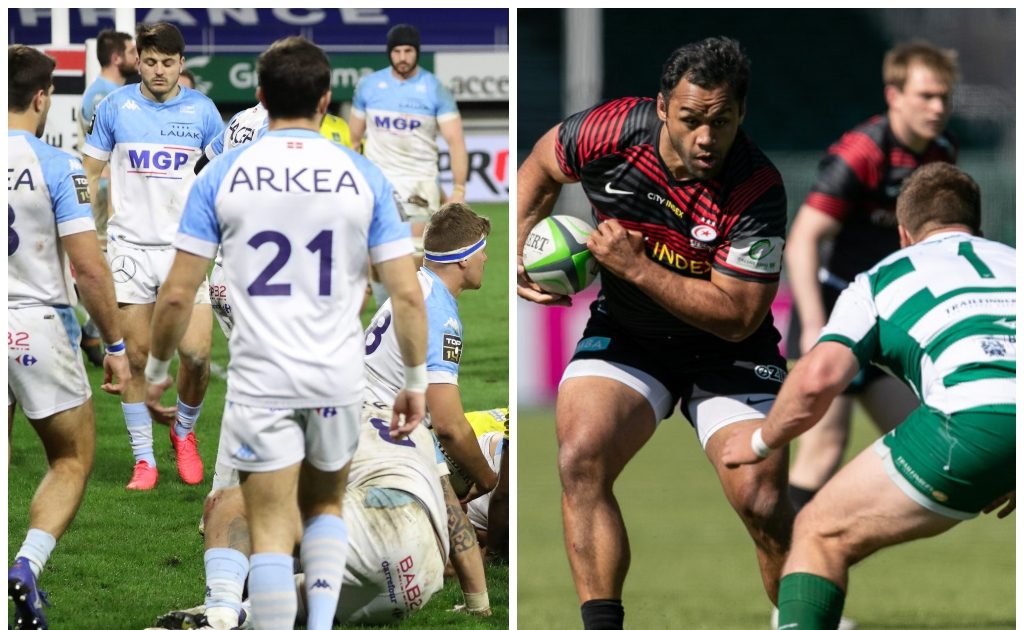 It was the spectacle of the weekend by some distance. Not the Exeter comeback at Sale, nor the Highlanders’ dismantling of the Brumbies, nor the Crusaders’ latest blitz, nor the Paris derby.

No, the spectacle of the weekend was the full house (Covid restrictions must have been lost in the post) at the Parc des Sports Aguilera in Biarritz, to see a Basque derby for playing rights in next season’s Top 14.

It threatened to have everything. Sadly, a try was not forthcoming, with some bizarre decision-making, a TMO intervention and desperate defence keeping the whitewash lines intact.

It could have boiled over multiple times, yet in a raucous atmosphere of which rugby observers can only have dreamed over the past two years both sets of players, and especially referee Alex Ruiz, did sterling jobs of keeping a lid on the ferocity. Mr. Ruiz, in particular, should be singled out for ensuring that the full-on scrap of a game was marshalled, rather than flat-out refereed, ensuring a flow that other, more pernickety and dictatorial referees might not have managed.

The two teams went at it full throttle from start to finish, with a febrile crowd roaring, whistling and cheering every step and mis-step. It built and built towards its finale, with the tale always threatening a twist, the players wringing every last drop of effort, the crowd towards the end swinging from the rafters and clambering up walls with fraught tension and emotion. 6-6 after extra time it finished, the teams inseparable largely by dint of their equally poor decision-making. It was rugby at its most basic, joyous, tribal level. It was enthralling.

Draws are so rare in rugby that perhaps this was an option just stuck on there in a mixture of hope and anticipation that it would not come to it. But it did. And immediately there began to be a creeping fear that this would not be a satisfying outcome.

But at least his miss, although it cost Cardiff a Heineken Cup semi-final, did not cost what Aymeric Luc’s miss did. Bayonne relegated, livelihoods likely cut, and all because Mr. Luc could not do something that he never purported to be able to do.

Penalties work in soccer. If not completely satisfying, it is at least in some way fair: all soccer players need to have the basic skill of being able to boot a ball with decent force into a fairly large goal from ten metres. Otherwise, what the hell are they doing there? The random element is the goalkeeper, but he is also there to do his basic job.

Goal-kicking in rugby is significantly harder. The shape of the ball and the need to boot it both higher and longer make it so. There’s a reason a team has specialist kickers. To hang the outcome of an important game on forcing someone to do something that does not belong to his or her basic skillset is too cruel. You can argue – as Biarritz coach Shaun Sowerby did – that ‘it’s sport’ but it’s not sport if you demand of players that they perform things which are not in their basic skillset.

So Loose Pass would suggest two different tie-breakers. Either let extra-time run and play sudden death, or use penalties but using specialist kickers from distances such as 40m, where statistically you are likely to get a miss sooner or later.

At least this would be players doing what they are supposed to do; how often do kickers decide the outcome of a game, even in normal circumstances? This, surely, is better than some poor soul having the guts to step up and do something outside of his remit and finding himself handing the spoils to the opposition.

Mr. Luc’s team-mates have been public in ensuring he does not wind up carrying blame and well they should, for Bayonne eschewed many opportunities for drop goals and butchered at least two clean breaks.

But penalties needs never to be on a rugby pitch in this form again. Sport can be cruel, but it should not be this cruel.

Because Ealing did not have it hard enough. Facing a team with over 500 international caps in its starting line-up alone, the Trailfinders were given notice by the governing bodies that even if they achieved the near-impossible and toppled Saracens, they could not be promoted because they couldn’t provide big enough facilities.

The Trailfinders have an agreement with a stadium provider in place, but will not commit or sign before they know how much cash they will receive as a notional Premiership team but not a shareholder in the closed shop that is the Premiership.

Ealing’s attempts to have meetings on that matter have been often cancelled or postponed, which can happen during the current climate, but then Ealing can quite rightly question how they are supposed to prepare for any promotion, including procuring stadium facilities, without knowing such information.

This reflects appalingly on both the RFU and the Premiership, the former for delivering the bad news two days before Ealing’s big game and the latter for keeping them in the dark on critical financial planning issues.

It’s so obstructive, you’d be forgiven for thinking that Ealing, who – lest we forget – finished top of the championship, were being kept at bay so that Saracens could get back into the top flight whatever the outcome. But that can’t be the case, that’s not how honest competition works.

In the event of course, Saracens’ stronger squad ran riot. All fair enough, and decided on the pitch. A shame that off the pitch, everything seemed to be stacked against Ealing too.