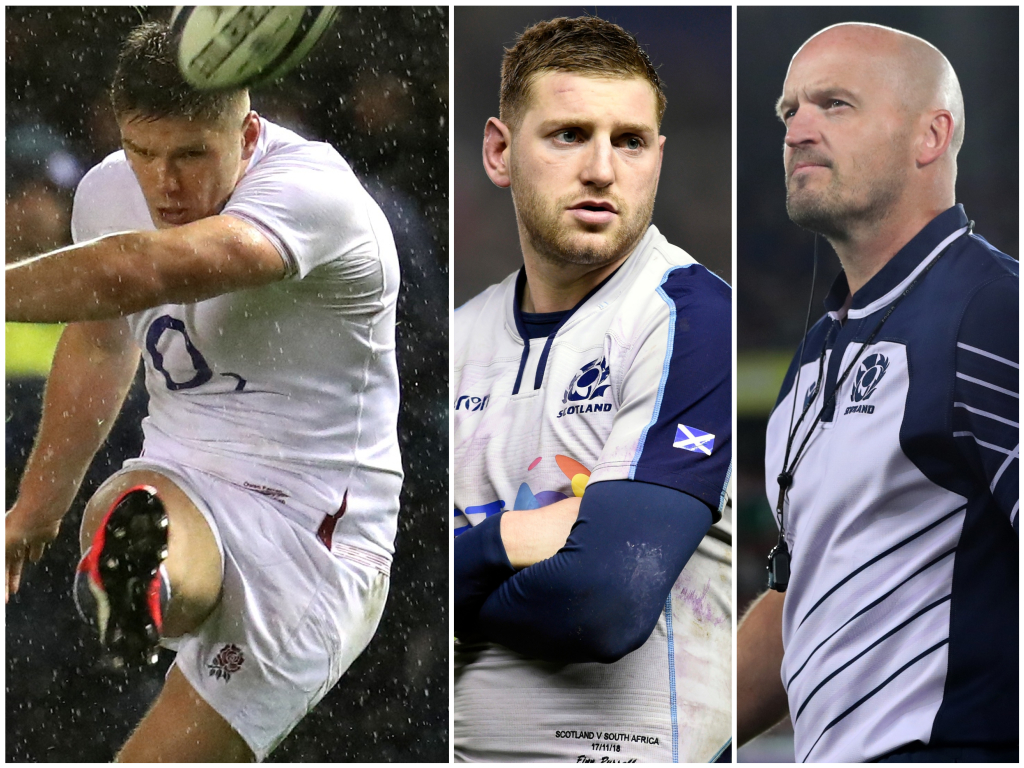 This week we will mostly be concerning ourselves with Scotland’s storm, England’s ugly campaign, crowd trouble and Warren Gatland’s early marker…

All is not well in rugby north of the border. Star players are fighting with coaches. The natives are restless. Anger is prevalent at all levels. All this despite the definite promise within the Scottish squad. Impatience? A cultural problem? A surfacing of tensions caused by Brexit?

Probably a mixture of the three – and a few other smaller factors. But while the restlessness, anger and spite around the Calcutta match last week was not just a Scottish problem, the Finn Russell saga most definitely is.

Russell does not come out of this well. As a player in a team, the bottom line is that he missed a meeting, ostensibly because he’d gone for a few beers and despite a couple of his team-mates asking him to fall back into line. As hooker Fraser Brown said: “…all we wanted to do was have a set of standards where we all pull in the same direction. The idea is everyone in this squad buys into that.” There is no suggestion anyone else in the squad is not falling into line.

So fine, that could have been the end of it all. But Russell is not backing down, insisting that it’s now about ‘control, respect, trust…,’ all the kinds of things you might hear a teenager moaning about when Dad sets a boundary.

Moreover, it’s also now about Russell challenging the work and leadership of Townsend. “I believe we need change, it needs to move in a different route. We’re tracking along a road and it’s not been working for us, and it’s especially not been working for me,” he said, also saying that his fabulous 40 minutes against England last year was a result of his rebelling against Townsend’s instruction.

Maybe it was. Maybe Russell is a once-in-a-generation player around whom much can be built. On a playing level anyway. But there are precious few other dissenting voices in the Scotland camp, and from the outside, it’s tough to find fault with anything Townsend has done on a team cultural level.

Russell is an instinctive player. He rails at statistics and kicking strategies, likes to point out the differences between himself and others, hates feelings of being controlled. He can do things on a pitch others can’t but – and this might be the crucial point here – he just does them. None of his finest moments have been a part of a plan, most of the time they are the variations from a plan, the outlier moments which change a game because the speed of thought and execution was just too fast for the opposition.

Good for him. But for every one of Russell, there are many others who are working within a game plan to stress the opposition and create the cracks and gaps Russell can use, or going hell-for-leather to get on Russell’s shoulder when he breaks or flings an outrageous pass. It takes both types to make a team. It’s tough for the gifted player to learn, but then Townsend himself ought to be a perfect candidate to pass on such lessons, given his history in and out of the Scottish jersey.

Scotland captain Stuart Hogg – no stranger to some outrageous moments of individual skill himself – reminded all of this balance required at the Six Nations launch when he said: “When you’ve got a guy like Finn Russell at 10 who just wants to chuck the pill about the paddock all the time, you’ve got to rein him in every now and then.”

Russell’s biggest mistake here is to judge himself above those others and insist everything revolves around him. Townsend might be trying to control an over-exuberant genius a little too much, but that’s for the sake of the team. Russell is doing what he is doing for the sake of Finn Russell, which is the problem here.

All was not that well around the Scotland-England game generally. It started with Sam Johnson’s somewhat predictable ‘nobody likes England’ line, continued with Eddie Jones’ assessment of Scotland as ‘niggly’ and goading, but then went badly south with Lewis Ludlam’s ill-judged ‘war’ and ‘hate’ soliloquy.

The scene was set after that. It was never going to be a light-hearted encounter, but in an age where the general population needs little excuse to find a platform to vent its frustration in as ugly a manner as possible, using that kind of rhetoric in the build-up was an appalling idea.

When a 78-year-old former Scotland captain feels compelled to rouse himself from his retirement and remind all that ‘hate is for terrorists, not for rugby,’ you have to know that something’s gone wrong with the game’s public image.

But Jones and England are cultivating a siege mentality founded on aggression, anger and perceived injustice. They spent the week winding up the opposition, then came over all aggrieved when the opposition fans reacted. If the fans’ acts were not those of rugby fans, neither were the words of the England players in the build-up. It was all a bit trashy.

Ellis Genge’s post-match rantings, on everything from throwing bottles at old men to seeing opponents celebrate victories to booing spectators to people daring to criticise his and the team’s dreadful performance last week, gave you an insight into how the team is motivating itself.

Fine, anger works. You need an edge in rugby and anger can give it to you. But edge fuelled by negativity like that is tiring, and it rarely lasts forever.

In the meantime, it’s not fostering the best image for the game in general. Instead, it goes a long way to creating the atmosphere of unpleasantness manifestly apparent throughout Saturday’s game at Murrayfield.

Ask any kicker. Really, any kicker. The answer is always the same. What’s harder, kicking a pressure kick to a cacophony of boos or kicking one to pin-drop silence?

Silence every time. It’s much harder to ignore your anxious inner monologue at a tough kick when it’s the only thing you can hear.

Perhaps someone should commission a survey of every goal-kicker and flash up the results on scoreboards when the away teams are about to kick at goal.

Instead we ask for respect, but as explained above, Scotland’s fans were unlikely to show any respect to players talking of hate and war during the week.

So explain to them that Owen Farrell might suffer from the silence. That ought to shut the boo-boys up.

Not that there’s any big race on for the All Black job yet, but you can bet your shirt that if Ian Foster struggles and moves on, Scott Robertson and Warren Gatland are the prime candidates waiting in the wings.

So Saturday’s win in Hamilton will have been of particular satisfaction to the former Wales coach, especially its resilient come-from-behind nature. We’re looking forward to the rematch already – a lot more so than the next England-Scotland game.