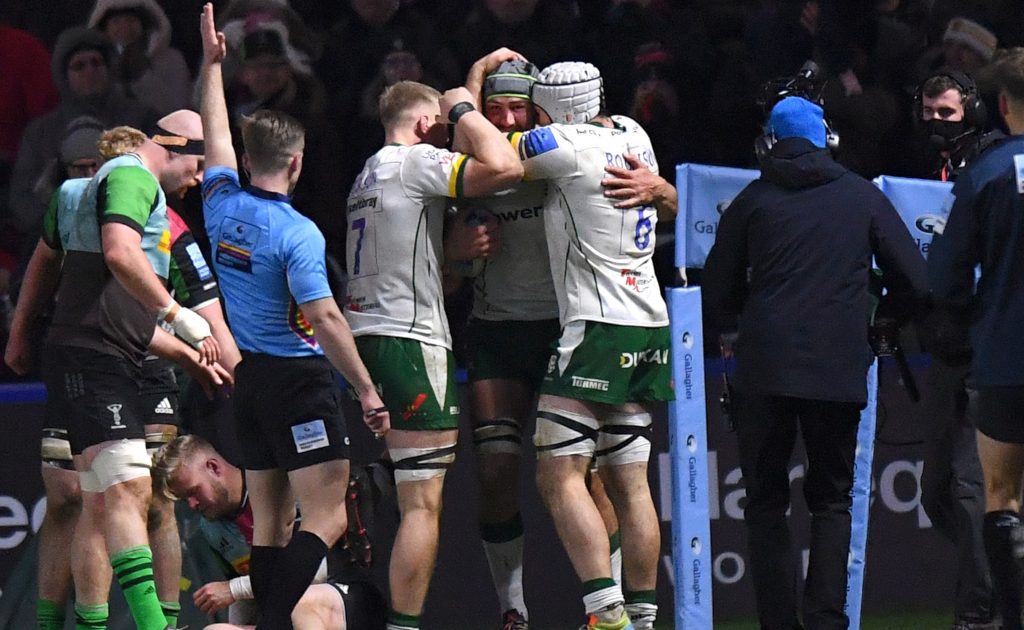 London Irish produced another excellent away display to overcome defending Premiership champions Harlequins 22-19 and secure their second victory of the campaign.

After defeating Exeter Chiefs at Sandy Park and drawing with Saracens from 34-8 behind, the Exiles were once again impressive on the road.

That was despite going into the interval 14-10 down following Luke Northmore’s score and Oscar Beard’s first ever try for Quins.

Paddy Jackson had kicked an early penalty for Irish before Agustin Creevy crossed the whitewash, but it was in the second period when Declan Kidney’s men really shone.

They played some excellent rugby at times and touched down twice through Rob Simmons and Ben White, which meant Beard’s second effort proved to be mere consolation for the hosts.

London Irish claimed the game’s first points through a simple penalty by Jackson after five minutes, as Quins failed to roll away at a ruck.

A couple of forward passes prevented the hosts from hitting back quickly, while a move involving Andre Esterhuizen and Danny Care, following Tommy Allan’s chip ahead, broke down on the left.

But Harlequins did have their first try in the 23rd minute when Care’s hopeful kick towards the left-hand corner was not dealt with and Beard pounced on the loose ball to score.

Allan added the conversion from out wide, but the Exiles hit back just before the half-hour mark when Argentina hooker Creevy grounded the ball off the back of a driving maul, following a succession of penalties.

Jackson’s conversion put the visitors 10-7 in front but it only took another seven minutes for the lead to change hands again.

It came from a delightful move as well, as Care sent Jack Walker through a gap down the middle and the hooker produced a lovely off-load to put Northmore in the clear to score under the posts.

That put Harlequins 14-10 ahead at half-time and it took a superb tackle by Jackson to prevent Tyrone Green from going through and extending that lead eight minutes after the break.

His intervention allowed the Exiles to then go ahead again, following a dangerous break by Parton, as Curtis Rona found former Australia lock Simmons in space to go over down the right.

Jackson missing the conversion meant just one point separated the teams, but Irish went more than a converted try clear when replacement scrum-half White darted his way over just short of the hour mark.

Quins missed a great chance to quickly pull a try back when Jack Kenningham knocked on close to the line after Beard had done brilliantly to gain ground on the left.

Beard did have his second with 13 minutes left when he went in at the corner after Care and Tom Lawday combined to find him in space, but Quins could not snatch a late winner this time as Irish doggedly held on.

Newcastle versus Worcester ends all square

Newcastle and Worcester played out a dogged 24-24 draw on a snowy Saturday night at Kingston Park in the Premiership.

Postponed by a day due to Storm Arwen, it turned out to be a thriller despite the difficult conditions.

The Falcons held a 12-10 advantage at the interval thanks to tries from George McGuigan and Adam Radwan, while Ashley Beck responded for the visitors.

Worcester then took the lead through Kyle Hatherell’s effort before scores from McGuigan and Kyle Cooper appeared to have secured the win for the hosts.

However, the Warriors rescued a draw as Billy Searle touched down and Fin Smith converted for the third time.