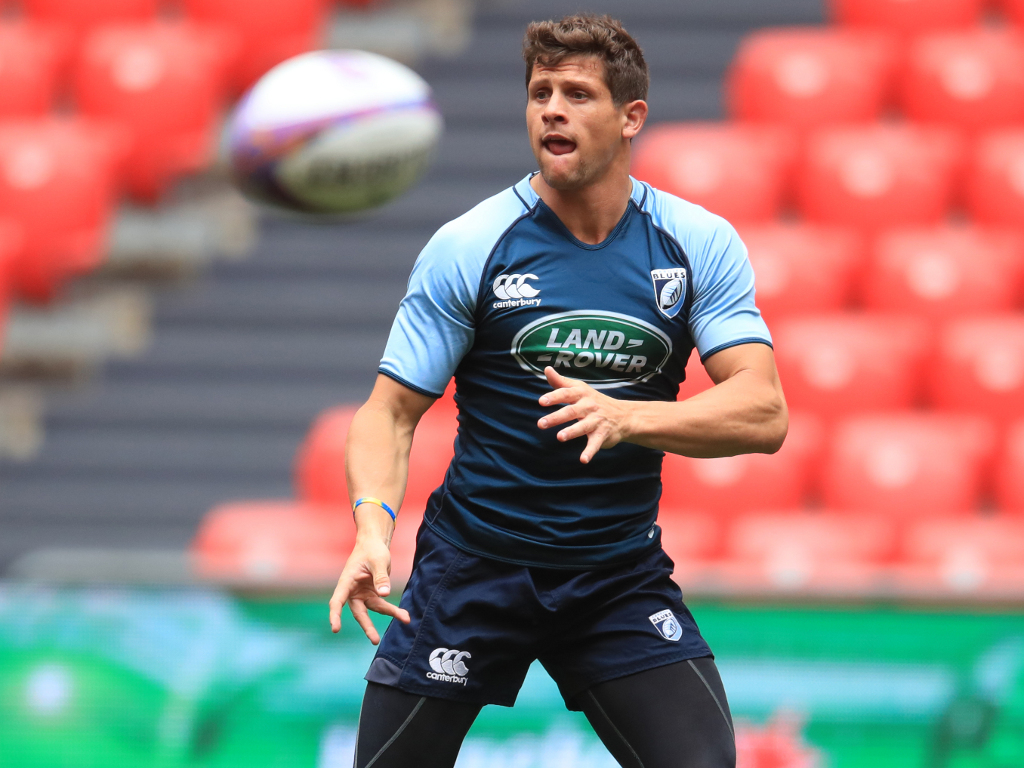 There are five PRO14 games scheduled for Saturday with Zebre, Ospreys, Munster, Cardiff Blues and Scarlets all having home-ground advantage in their respective matches.

Zebre have made a handful of changes to their side as they look to bounce back from last week’s away defeat to Ulster.

Michelangelo Biondelli, Enrico Lucchin and Joshua Renton come into the backline at full-back, inside centre and scrum-half, taking the places of Junior Laloifi, Tommaso Boni and Guglielmo Palazzani respectively.

Up front there is a new-look front-row as Andrea Lovotti and Alexandru Tarus are the starting props, with Luca Bigi named at hooker for the home clash.

Mick Kearney replaces George Biagi at lock while Johan Meyer and David Sisi come into the back-row, Johan Meyer moving to the other flank to accomodate the changes.

Meanwhile, Ryan Wilson will captain Glasgow Warriors for the first time this season as the back-rower returns to lead the side in Parma.

The 30-year-old is one of eight changes to the starting XV that ran out against Southern Kings at Scotstoun, which sees four further Scotland squad members return to club duty following the 2019 Rugby World Cup in Japan.

Fraser Brown comes into the side at hooker, packing down between two of last weekend’s try-scorers in Oli Kebble and Zander Fagerson.

Having played a part in all four of Scotland’s matches in Japan, Scott Cummings comes back into the Glasgow fold to partner Tim Swinson in the second-row.

Chris Fusaro makes his 100th start for the club by joining the returning Wilson on the flanks, with Matt Fagerson the sole surviving member of the back-row.

George Horne and Adam Hastings continue at half-back, with the latter having contributed four conversions to the 50-0 victory at Scotstoun last weekend.

A new-look centre partnership sees Sam Johnson start in the number 12 jersey, with Kyle Steyn running out at 13 for the first time in the new campaign.

After his try-scoring cameo from the bench last weekend, Ratu Tagive starts for the Warriors for the first time in 20 months, with DTH van der Merwe retaining his place on the other wing.

Tommy Seymour completes the starting line-up, as the Scotland international comes into the side at full-back.

The Ospreys team to play Southern Kings at the Liberty Stadium has been named in what is a battle of two Conference A strugglers.

Young Cai Evans maintains his position at full-back with Hanno Dirksen on one wing and Lesley Klim – making his first Ospreys start – on the other. Tiaan Thomas-Wheeler and Scott Williams partner up once more in midfield, while Luke Price picks up a new half-back partnership with Shaun Venter returning from injury at scrum-half.

Scott Otten starts at hooker with Rhodri Jones and Tom Botha packing down alongside him. An unchanged second-row sees Marvin Orie line up alongside Lloyd Ashley, with Dan Lydiate on the blindside as captain next to Olly Cracknell. Young Morgan Morris comes into the starting line-up at number eight.

Mnisi will pair up in midfield with Erich Cronje, who left the field last weekend following a knock to the neck, but has fully recovered to continue the good vein of form he has shown in the matches he has played so far.

The Kings have also named an exciting back three which will see young wings Josiah Twum-Boafo and Christopher Hollis playing alongside loanee, Scott van Breda, at full-back.

The Worcester Warriors utility back replaces the evergreen Masixole Banda, who is receiving some needed rest this week, having played in all of the Southern Kings matches so far.

In the forward pack, Junior Springbok Elrigh Louw, who has shone each time he has come on from the bench in previous matches for the Southern Kings, will earn his first starting berth this weekend at number eight, where he replaces last weekend’s captain Ruaan Lerm.

Aston Fortuin, who has been one of the standout forwards this season, will also be managed after playing almost every minute of the Kings’ matches so far this season. The talented lock will play from the bench this week, with Jerry Sexton replacing him in the starting XV.

Finally, the experienced scrum-half Sarel Pretorius, who has a wealth of knowledge of Welsh teams and conditions, will provide half-back cover from the bench as he will make his first appearance for the South Africans this season after recovering from a leg injury.

Munster head coach Johann van Graan has named his side for Saturday’s PRO14 Interpro derby against Ulster at Thomond Park.

Peter O’Mahony captains the side with eight of Munster’s Rugby World Cup contingent set to feature.

JJ Hanrahan, Alby Mathewson and Chris Cloete keep their places in the side after helping Munster to a bonus-point win away to Cardiff Blues last week as Munster make 12 changes.

Mathewson and Hanrahan continue their half-back partnership with Rory Scannell and Farrell in the centres.

James Cronin, Scannell and Ryan pack down in the front-row with Kleyn and Billy Holland in the engine room.

O’Mahony, Cloete and Stander are named in the back-row.

Team News | Here is your Ulster team that will take on Munster at Thomond Park on Saturday evening, in the first inter-pro derby of the season 👇

Meanwhile, Ulster boss Dan McFarland has made seven changes from the side that defeated Zebre last Friday with Irish internationals Jacob Stockdale and Jordi Murphy set to make their first appearances this season.

In the back three, Matt Faddes switches to the full-back position, and is joined by the returning Stockdale and Rob Lyttle on the left and right wings respectively.

Stuart McCloskey is recalled to join last week’s man-of-the-match, Luke Marshall, in midfield. Angus Curtis will make his first start for Ulster this season at fly-half and is joined by John Cooney at scrum-half, who made his 50th appearance last time out against Zebre.

Among the four changes in the forwards, Marty Moore returns to make his first start of the season at tighthead prop, joining Jack McGrath at loosehead and captain Rob Herring to make up an all-international front-row. Sam Carter comes back in to join Alan O’Connor in the second-row.

Joining Murphy will be Sean Reidy on the blindside flank, and Nick Timoney switches to assume the number eight position, completing the back-row.

Lloyd Williams will make his 200th appearance for Cardiff Blues in Saturday’s PRO14 encounter against the Cheetahs.

The scrum-half, who came through the Blues academy system, made his senior debut for the region in 2009/10, and overtook Gethin Jenkins (195) on the all-time list earlier this season.

Only Taufa’ao Filise has made more appearances for Cardiff Blues (255).

Wales’ capital region go into the encounter on the back of four disappointing defeats and head coach John Mulvihill has made five changes to his starting line-up with Jarrod Evans lining up at inside centre.

That sees Jason Tovey pull on the number 10 jersey for the first time in a competitive fixture since returning to the Arms Park, while Harri Millard is preferred to Jason Harries on the wing.

The other three changes in personnel come up front with Liam Belcher returning from illness to start at hooker, Seb Davies packing down alongside Josh Turnbull in the boiler house and Nick Williams returning to number eight.

With injuries striking down Rory Thornton and Olly Robinson, Macauley Cook and Alun Lawrence are included among the replacements for the first time this season.

Anthony Volmink comes in on the left wing with Clayton Blommetjies moving to number 14, which means William Small-Smith returns to centre duty this weekend.

Joining Small-Smith in midfield is Benhard Janse van Rensburg, who moves in one position to 12, while Ruan Pienaar gets the nod at scrum-half and as captain.

In the pack, Luan de Bruin starts at loosehead prop while second-row Walt Steenkamp and flanker Gerhard Olivier also get the nod this weekend.

Scotland international Blade Thomson returns to the Scarlets side for their clash with Benetton at Parc y Scarlets.

Thomson, part of the Scots’ World Cup challenge in Japan, will make his first appearance of the season in a starting XV showing four changes from the team that beat the Cheetahs in Llanelli last Saturday.

The former Hurricanes forward slots in at number eight in place of Uzair Cassiem, who drops to the bench. Elsewhere in the pack, Taylor Davies comes in for Marc Jones at hooker.

Davies packs down in a front-row that includes Phil Price and Wales international Samson Lee. Lewis Rawlins and Steve Cummins again get the nod in the second-row.

Behind the scrum, Johnny McNicholl has recovered the ankle knock that forced him off late on against the Cheetahs and starts at 15 with Steff Evans and Corey Baldwin taking the wing spots.

Baldwin replaces Ryan Conbeer out wide to make his first PRO14 start of the campaign.

In midfield, Paul Asquith has recovered from the facial injury he sustained against Zebre in Round Three and is reunited with skipper Steff Hughes in the centre, while Dan Jones and Kieran Hardy continue their half-back partnership.

Prop Werner Kruger will make his 100th appearance for the Scarlets if he comes off the bench.

Kruger, who joined the Scarlets in 2016, will complete a remarkable hat-trick of centuries in professional rugby having played more than a hundred times for both the Bulls’ Super Rugby side and the Blue Bulls in the Currie Cup.

Loan signing Ryan Lamb could also make his first appearance for the Scarlets senior side. The former England A international has been named among the replacements for the first time.

In the backline, Angelo Esposito comes in on the right wing in place of Iliesa Ratuva while Monty Ioane replaces Angelo Esposito on the other flank and Tito Tebaldi takes over from Dewaldt Duvenhage at scrum-half.

In the forwards, there are several tweaks with Nasi Manu coming in to start at number eight in place of Toa Halafihi while Federico Ruzza takes over from Eli Snyman in the second-row.