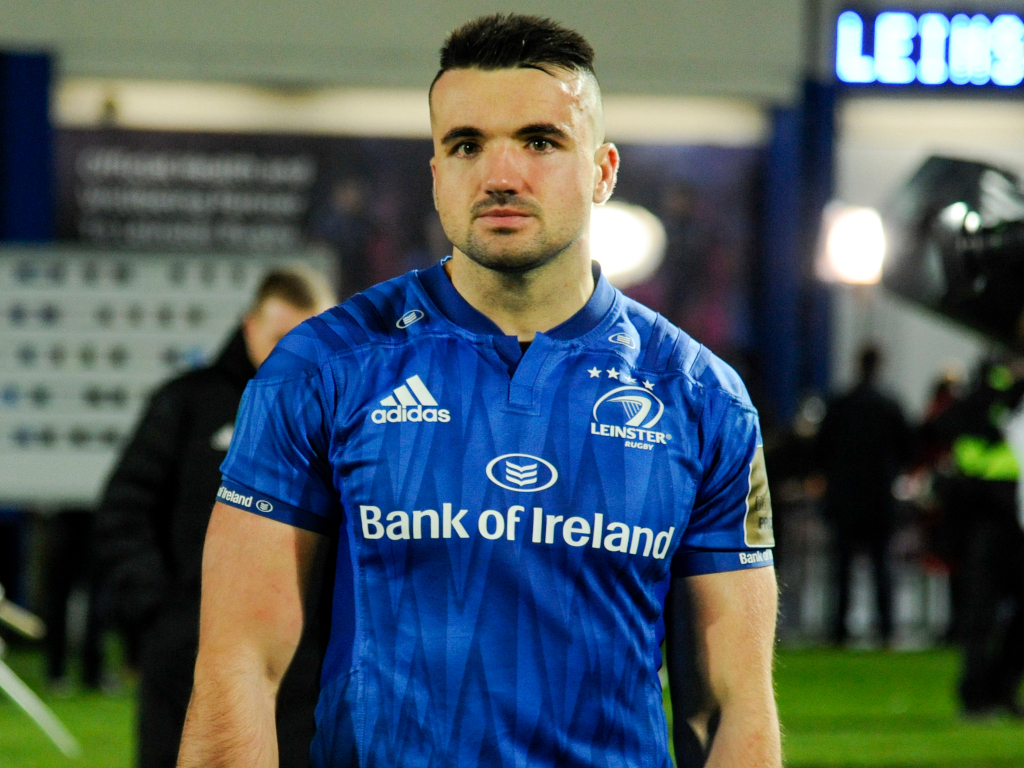 Cian Kelleher claimed a second-half hat-trick in Leinster’s crushing 50-10 PRO14 victory over Edinburgh at the RDS.

It was a sixth straight bonus-point triumph for the Conference A leaders, who are one away from equalling the Championship record of seven.

Helping the hosts into a 26-3 lead, Dave Kearney, Luke McGrath (2) and Peter Dooley all dotted down during a fruitful 27-minute spell before half-time.

In a physical opening, it took turnover ball for Leinster to break the deadlock in the 12th minute. An overthrown Edinburgh lineout, coupled with a Leavy turnover, led to Jimmy O’Brien side-footing through for Kearney to score in the left corner.

Ciaran Frawley flashed the difficult conversion wide but was back on target after Kearney had turned provider. Breaking down the left, he fed a return pass back inside for McGrath to finish off for a 12-0 lead.

A well-struck 31st-minute penalty from Chamberlain rewarded the visitors’ reinforced defence, which was highlighted by James Johnstone and Luke Crosbie’s ball-dislodging double hit on Devin Toner.

However, as the interval approached, Leavy was held up by Pierre Schoeman before prop Dooley burrowed over from James Tracy’s quick tap.

Frawley converted and also added the extras to McGrath’s 38th-minute effort, the nippy scrum half evading Jack Blain’s clutches after being released by Frawley’s clever footwork and inviting offload.

Barely two minutes into the second half, a Scott Penny-led breakaway paved the way for Leinster’s fifth try. The pick-and-drives paid off when Leavy crashed over to celebrate his first start since March 2019.

Frawley tagged on his fourth conversion and Edinburgh’s night worsened with Eroni Sau sin-binned for a deliberate knock-on. Harry Byrne’s deft chip to the right corner was matched by an equally classy finish from a sliding Kelleher.

The wing was over again in the 53rd minute, profiting from two lovely floated passes from Byrne and O’Brien to make it 45-10.

A purple patch from Edinburgh, sparked by a Chamberlain break, ended with Groom grounding from a quick tap with 13 minutes remaining.

Leinster had the final say, though, as slick hands from David Hawkshaw and O’Brien put Penny through, and the flanker offloaded out of a tackle for Kelleher to complete a 25-minute hat-trick.

It's all over in Wales, and @cardiff_blues have got their first win in four! 🙌

Cardiff Blues ended a run of three consecutive PRO14 defeats with a 22-5 victory over Benetton at Rodney Parade.

Tries from Rory Thornton, Ben Thomas and Owen Lane saw Blues pickup a much-needed win which saw them join Scarlets in second place in Conference B.

Jarrod Evans kicked a penalty and two conversions to ensure the Italians remain without a league win this season as they could only manage a consolation try from replacement Tomas Baravalle.

Following his call-up to the Welsh squad, James Botham was a late withdrawal from Blues’ line-up with James Ratti taking his place in the back-row.

The hosts soon suffered another setback when they conceded an early scrum penalty but in the difficult playing conditions, Ian Keatley could not capitalise with the 45-metre penalty.

Benetton, with the advantage of a stiff wind, had the better of the opening quarter but it was Cardiff who should have picked up the first score but a 30-metre penalty attempt from Evans rebounded off a post.

The first quarter therefore finished scoreless but two minutes later Evans got the scoreboard rolling with a straightforward penalty.

From the restart, Blues centre Willis Halaholo knocked-on to give the Italians a further chance to exert pressure but the home side’s defence held firm before breaking away into opposition territory.

From there, the hosts declined a kickable penalty and their decision was rewarded when lock Thornton finished off a driving line-out to crash over to give his side an 8-0 interval lead.

Four minutes after the restart, Cardiff flanker Olly Robinson left the field with an injury and was replaced by Alun Lawrence.

Robinson’s departure was the catalyst for Benetton to go on the offensive but despite having a number of promising positions, they lacked the accuracy to benefit and the third quarter finished scoreless.

The incessant rain continued to ensure that handling errors were the major feature of the game and these prevented both sides from gaining any real momentum.

The game needed something to raise it from its slumbers and it came when Lane was put into space and the wing burst away to evade a defender and score an excellent solo try.

Despite losing a player to the sin-bin, Benetton rallied to open their account with a try from Baravalle from a line-out drive but Blues had the final say with a last-minute try from Thomas.

Elsewhere, Marcell Coetzee scored a first-half hat-trick for Ulster to set up a bruising 57-14 PRO14 victory at Zebre.

The South Africa international ran riot in the first 40 minutes and then added a fourth try after the break as the visitors consolidated second place in Pool A.

Coetzee’s fifth-minute opener, which was converted by Bill Johnston, was cancelled out by Antonio Rizzi for Zebre, but then Ulster put their foot down.

Coetzee crossed the line twice more either side of Stewart Moore’s try, with Johnston adding two conversions, to give the visitors an emphatic half-time lead.

Johnston added a try of his own after the break, with Luke Marshall, Coetzee, Ethan McIlroy and David Shanahan all touching down in a romp in Parma.