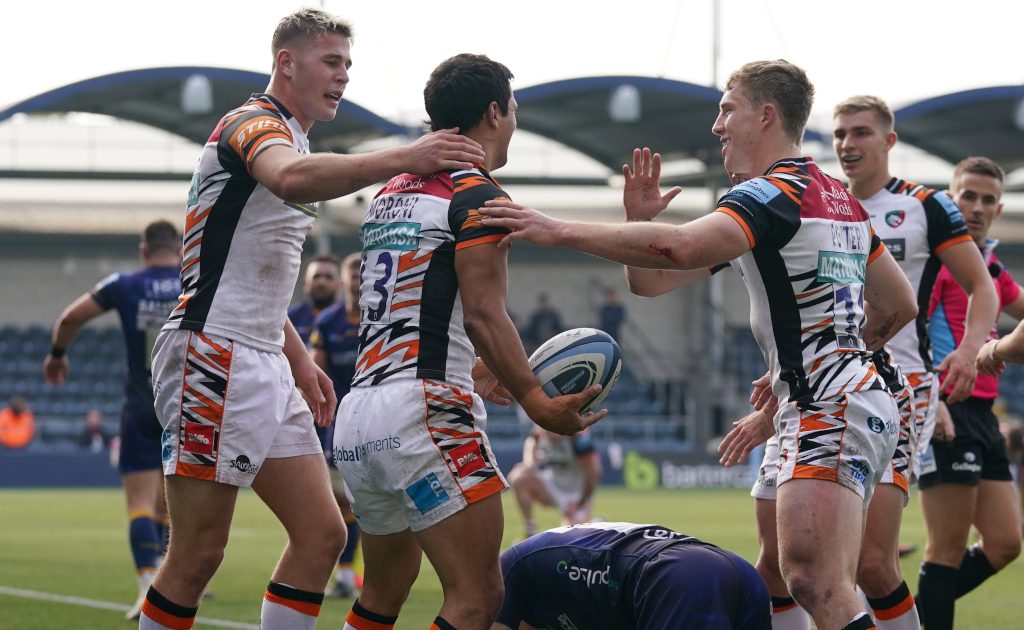 Pace-setters Leicester Tigers racked up a fifth successive Premiership win of the season as they thumped Worcester Warriors 48-3 at Sixways on Saturday.

It confirmed Tigers’ best start to a Premiership campaign since the competition began in 1997.

They opened up a seven-point gap on nearest rivals Harlequins, with Worcester being the latest team to witness at first hand Leicester’s continued resurgence under head coach Steve Borthwick.

Fly-half George Ford underlined his claims for an England recall in Eddie Jones’ Autumn Nations Series squad that will be announced on Monday, impressing throughout and kicking a penalty and three conversions.

Worcester, beaten 42-5 by Exeter last weekend, were once again on the end of a major drubbing as they slumped to a fourth Premiership defeat on the bounce.

England centre Ollie Lawrence clocked up 50 appearances for the Warriors, while head coach Jonathan Thomas made five changes from the side crushed by Exeter last weekend, including starts for full-back Harri Doel, scrum-half Will Chudley and flanker Sam Lewis.

Unbeaten Leicester included South African back-row forwards Marco van Staden and Jasper Wiese, and there was a place on the bench for 38-year-old Wigglesworth, who provided scrum-half cover.

Leicester made the early running, and Ford kicked them into a sixth-minute lead after Worcester infringed on the edge of their own 22.

The Warriors could make little impression on the contest, and they fell further behind after 13 minutes following more strong work by Leicester’s pack.

Worcester did well to defend an attacking lineout, but Potter then surged through a huge gap for a try that Ford converted, and Tigers led 10-0.

Billy Searle opened Worcester’s account through a long-range penalty, yet it proved only a temporary reprieve for the home side as the Leicester forwards again made hay in the sunshine.

And when the ball was moved wide, Ford’s neat pass sent Moroni through for his team’s second try that opened up a 12-point gap midway through the second quarter.

Leicester had complete control of the game, pinning Worcester inside their own half for long periods, and a third try arrived before half-time when Montoya touched down and Ford added the extras.

It gave the Tigers a 22-3 interval advantage, and the second 40 minutes appeared to be nothing more than a damage-limitation exercise for Worcester after being physically dominated and tactically out-thought.

Leicester full-back Freddie Steward made a searing break shortly after half-time that should have led to a try, but Worcester escaped and then enjoyed a good spell of pressure inside Tigers’ 22 either side of Warriors hooker Scott Baldwin briefly going off injured.

Referee Luke Pearce then ran out of patience with repeated Leicester infringing, and Tigers flanker Hanro Liebenberg was yellow-carded.

It made little difference to the overall picture, though, and Tigers claimed a fourth touchdown after superb approach work by Nadolo that allowed Wigglesworth a clear run to the line.

Ford converted, and Leicester should have gone past 30 points when Steward crossed, but the try was disallowed following a neck grab by Van Staden.

Dolly soon resumed normal service, though, and there was time for Nadolo to claim try number six, with Worcester desperate to hear the referee’s final whistle as Burns dived over.

Elsewhere, a dogged display from Newcastle Falcons saw them battle their way to a 13-5 win over Bristol Bears at Kingston Park.

In front of a bumper 6,746 crowd, the Falcons were looking for their third win of the new season following victories against Bath and Wasps.

Bristol headed into the contest a shadow of the side that topped the Premiership last season, having lost three of their opening four matches.

The first half saw both sides butcher opportunities through their own inaccuracy.

A few dangerous touches from Bristol backs Ioan Lloyd and Antoine Frisch saw them ask questions of the Falcons defence early on but their first real chance of the half came through a Callum Sheedy penalty touch finder.

However, from the resulting lineout, a misfire in midfield saw Falcons full-back Mike Brown, making his Kingston Park debut, scoop up the ball and counter, with his kick through just a bit too strong for the onrushing Adam Radwan who was bundled into touch.

With 23 minutes gone, Newcastle were handed another opportunity inside Bath’s 22 but a scrag tackle on scrum-half Louis Schreuder halted their attack as the Bears won another turnover just shy of their line.

But after wasting a number of chances, the Falcons managed to crash over for the first score of the game through flanker Callum Chick, with Brett Connon adding the extras on the stroke of half-time to give Newcastle a 7-0 lead.

After the break, both sides traded blows in the midfield before a superb Brown tackle halted Lloyd and Alapati Leiua from combining down the wing for Bristol, with the latter being forced into touch.

A dangerous break from Sheedy after 52 minutes saw Connon cynically knock the ball on, with referee Christophe Ridley having no option but to send the Falcons fly-half to the bin for 10 minutes.

And minutes after the yellow, Bristol touched down for a score of their own as scrum-half Harry Randall’s quick tap penalty saw him race from his own half to put Leiua in down the left wing, with Lloyd unable to add the extras.

Despite being down to 14, the Falcons thought they had their second try through on-loan centre Max Wright after Schreuder capitalised on a loose ball at the base of the scrum only for Ridley to call it back for a reset.

Bristol missed a chance to take the lead through a missed Lloyd penalty which was then punished by Connon who slotted one of his own minutes later to give Newcastle a 10-5 advantage.

And another Connon penalty late on put Newcastle out of sight, handing them a dogged 13-5 win over last season’s Premiership table toppers.

Exeter hang on to beat Wasps

Exeter Chiefs continued their march up the table with a hard-earned 27-23 win over injury-ravaged Wasps who were outgunned but not outfought.

Wasps ruffled Exeter’s feathers in the build-up to the game by complaining about the Native American-style headdresses worn by some of the Chiefs’ supporters and calling on Premiership Rugby to outlaw them.

The ploy looked to have backfired badly when last season’s beaten finalists scored two tries in the opening 25 minutes and Wasps committed three handling errors in the Chiefs’ 22, but the home side decided to take on their opponents at their own game.

They twice turned down kickable penalties and kicked to touch. Elliott Stooke secured the first line-out and Exeter had no time to defend the maul as Wasps drove them over the line with hooker Dan Frost in possession.

Just before half-time, Harry Williams conceded a breakdown penalty which Jacob Umaga again kicked to within five metres of Exeter’s line. Vaea Fifita was the target and Exeter’s wrong-footed defence split, allowing Thomas Young to find the line without any support.

It looked a different story at the start of the second quarter when Exeter scored two tries in five minutes after Jimmy Gopperth had landed two penalties to Henry Slade’s one.

Wasps seemed to have survived Josh Bassett’s visit to the sin-bin for a high tackle on Tom Hendrickson when Dave Ewers cracked the defence and Jack Maunder freed Slade to score Exeter’s opening try in the 21st minute.

The visitors’ second try came after Stooke lost the ball near the Chiefs’ line. Wasps conceded a penalty and were caught out at the following line-out just inside their own half when Harvey Skinner and Stuart Hogg gave wing Facundo Cordero the space to round Marcus Watson.

Wasps had left Exeter struggling for inspiration with the speed of their line defence and they were forced to dig deep at the start of the second period when Exeter mounted a wave of attacks, fortified by five penalties which they either kicked to touch or tapped.

They found no way through, held up short eight times. Frost was sent to the sin-bin for his side’s persistent infringing and a Wasps’ water-carrier was ordered not to return to the field after sparking a melee by kicking the ball away to prevent Exeter taking a quick penalty.

England announce their squad for the autumn on Monday and forwards coach Richard Cockerill saw hooker Luke Cowan-Dickie hobble from the field after falling awkwardly on his left ankle. Gopperth gave Wasps a cushion with his third penalty against the run of play, but Sam Simmonds scored from a scrum after 61 minutes as Exeter rallied back.

Jonny Hill made up for three handling errors with an acrobatic try in the corner to regain the lead for Exeter who held on after Simmonds’ turnover on Francois Hougaard ended Wasps’ final attack.