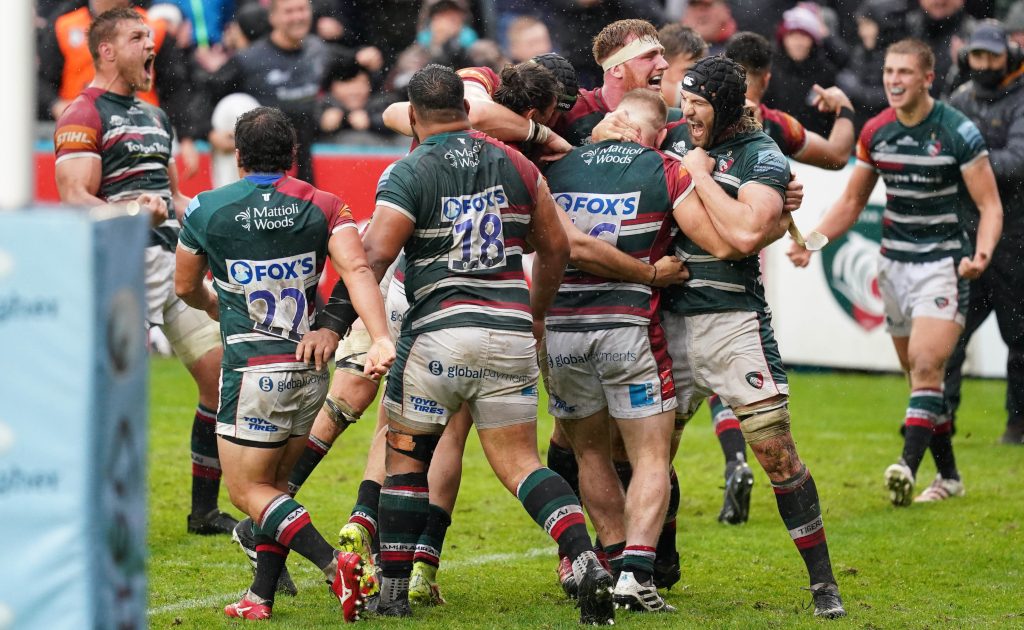 Leicester Tigers were awarded a late penalty try as they continued their fine start to the season following a dogged 13-12 triumph over Saracens.

The visitors controlled much of the contest and went into the latter stages 12-3 ahead via four penalties from England and Lions playmaker Owen Farrell.

George Ford then added his second three-pointer – his first coming on the stroke of half-time – with five minutes remaining before the Tigers set up one final attack.

After being awarded a penalty, they went to the corner and charged towards the line. Sarries illegally collapsed the drive, leaving referee Christophe Ridley with no alternative other than to award a game-winning penalty try.

Sarries looked to mark the £32million takeover of the club by a consortium that includes former South Africa captain Francois Pienaar by claiming their fifth successive league victory at Welford Road, but they blew a nine-point lead in the final six minutes.

The crowd gave Leicester a raucous welcome but were quickly silenced as Saracens took immediate control of the game in front of England head coach Eddie Jones, going six points up in 10 minutes through two Farrell penalties as Leicester buckled under pressure.

The Tigers went into the match as the Premiership leaders but head coach Steve Borthwick mixed up his side, with skipper Ellis Genge and two other England international regulars, Harry Wells and Freddie Steward, on the bench.

Saracens were fortified by the return of two of their Lions – Farrell and hooker Jamie George – and they controlled the tempo from the off, ensuring they had cover to deal with Leicester’s kicking game and exposing Freddie Burns’ lack of experience at full-back.

Billy Vunipola was among the players looking to draw Jones’ attention and he was close to the action in a game that was dictated by the wet conditions. He made some trademark charges and thwarted Leicester’s first attack with a timely tackle on Hanro Liebenberg and impressed overall.

George Ford was another outcast hoping to impress Jones, but with his forwards outgunned until they brought on reinforcements after the break, he enjoyed less time on the ball than Farrell and had little influence on proceedings until the end.

The visitors only led 9-3 at the interval, Farrell kicking three penalties to Ford’s one. The England captain kicked a fourth to give his side a 12-3 lead and they were looking comfortable until the frantic finish.

Callum Chick went over in the final minute as Newcastle Falcons overcame Wasps 18-14 at Kingston Park.

The Falcons dominated the first half, going 8-0 ahead through Carl Fearns’ try and Will Haydon-Wood’s penalty, but the visitors hit back in the second period.

Tom Penny was sent off for Newcastle and the visitors touched down twice via Tom Cruse and Tom Willis to seemingly take the victory, but Chick had other ideas.

Gloucester too good for Worcester

Gloucester secured their first win of the season as they scored three second half tries to defeat Worcester Warriors 31-23 at Sixways.

The first half was dominated by the boot as Adam Hastings kicked four penalties to Owen Williams’ one.

Williams and replacement Billy Searle reduced the arrears after the break but Ben Morgan and Jason Woodward went over to effectively complete the win for the Cherry and Whites.

Kyle Hatherell responded for Worcester but, after Ted Hill was red carded for the hosts, Chris Harris rubberstamped the victory for Gloucester.

Despite the difficult conditions, the Saints were excellent in the opening quarter, touching down twice via Tom Collins and Matt Proctor for a comfortable buffer.

However, the Exiles responded, firstly just shy of the interval through Agustin Creevy before they took the lead thanks to Tom Parton and a penalty try.

Northampton – and Biggar – had the final word, though, and meant the Saints maintained their unbeaten start to the campaign.