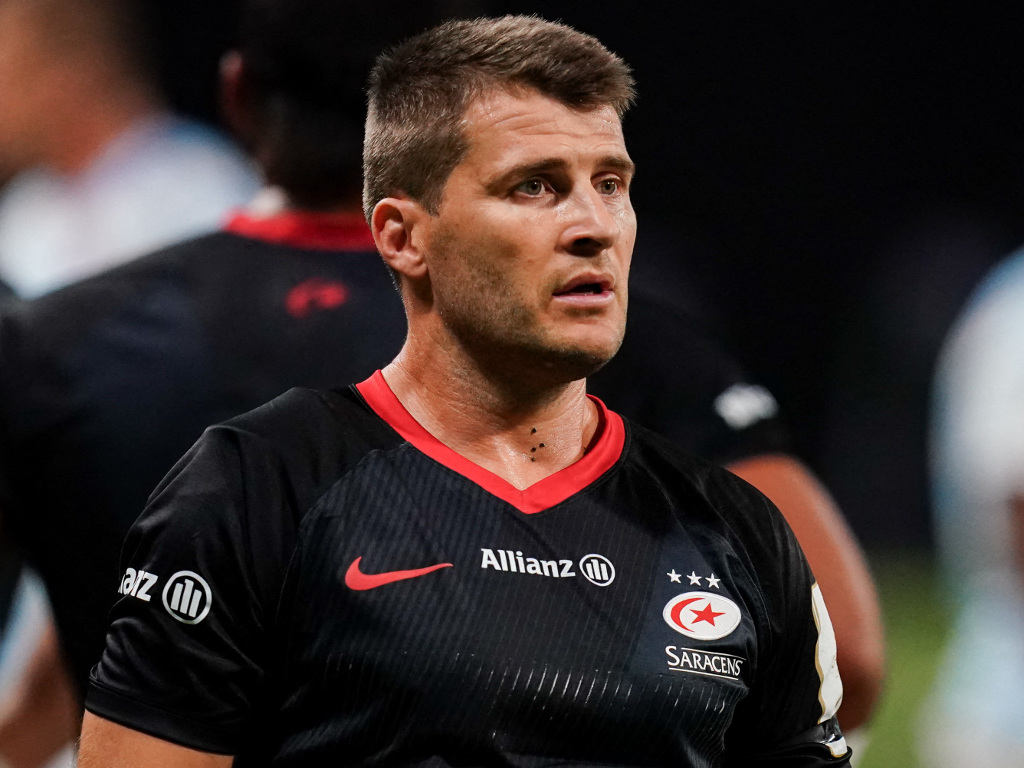 The opening round of the Premiership continues this weekend with three games on Saturday before the action concludes on Sunday at the Ricoh Arena.

Josh McNally will captain Bath as the side prepare for the visit of newly-promoted Newcastle Falcons in Round One of the Premiership.

Lewis Boyce, Jack Walker and Henry Thomas form together in the front-row for the first outing of the season with McNally and Will Spencer at lock. Mike Williams, Miles Reid and Zach Mercer come together in a new-look back-row.

Ben Spencer and Rhys Priestland will look to reignite their partnership from post-restart last season as the nine and 10 will look to pull the strings on Saturday.

Outside of this pairing Josh Matavesi will line up against his former side for the first time and is joined in midfield by Cameron Redpath.

Bath name a strong back three with Ruaridh McConnochie and Joe Cokanasiga positioned on the wide channels with young Tom de Glanville at full-back.

A notable appearance on the bench sees Charlie Ewels returned from international duty this weekend.

Meanwhile, Newcastle Falcons will unleash an all-English back-line when the Premiership new boys get their season underway at Bath.

Last season’s unbeaten Championship winners have selected a matchday 23 boasting 19 English-qualified players, more than half of whom have come through the club’s academy.

Ben Stevenson and Adam Radwan team up on the wings having scored a combined total of 21 tries in 29 games last season, while Tom Penny starts at full-back after impressing there during last Friday’s 21-12 home win over Ealing.

On the bench there could be a first team debut for former England U20s flanker Josh Basham, with England U20s lock Rob Farrar and ex-Doncaster centre Pete Lucock also in line for their first Premiership appearances, should they be called upon.

Newcastle’s last opening-day trip to Bath came in September 1997, the newly-promoted side winning 20-13 in a season which saw them going on to claim the league title at the first attempt.

Form: Bath’s only regular-season defeat in the last nine rounds of Gallagher Premiership Rugby was 23-27 at home to Wasps on 31 August. Bath have slipped to opening weekend defeats in each of the past two seasons, both encounters being away trips to Bristol Bears. Newcastle Falcons’ return to Gallagher Premiership Rugby after a one-year absence having won every game they played in level two last season. The Falcons have lost their last five Premiership Rugby fixtures since beating Sale in the ‘Big One’ at St James’ Park in March 2019. Bath beat Newcastle in their most recent Premiership Rugby clash at the Recreation Ground in February 2019 to end a four-game losing run to the Tynesiders.

Richard Wigglesworth leads @Saracens out on his 250th and final game for the club 🔴⚫️ pic.twitter.com/h2e91dhfDm

Leicester Tigers name four debutants in the matchday squad to open the season at home to Gloucester on Saturday at Welford Road.

In the 2,500th first-team game to be hosted at the Tigers’ home stadium, head coach Steve Borthwick names new additions Richard Wigglesworth and Jasper Wiese in the starting line-up, with Joaquin Diaz Bonilla and Cyle Brink among the replacements.

Former England international scrum-half Wigglesworth is joined by Zack Henry at half-back for the season-opener.

Harry Potter, Guy Porter, Jaco Taute and Kobus van Wyk, who all made their debuts for the club during the extended 2019/20 season, are joined by academy graduate Freddie Steward in the backline.

Wiese starts at number eight and he is joined by fellow South African back-rower Hanro Liebenberg and Tommy Reffell at the base of the forward pack.

Harry Wells makes his 100th first-team appearance for the club and is joined by three more homegrown players in Tom Youngs, Dan Cole and Calum Green in the front five alongside Argentinian prop Facundo Gigena.

The replacement front-row of Charlie Clare, Ryan Bower and Joe Heyes are also academy graduates, with Cameron Henderson joining Brink as cover among the rest of the pack. Ben White, Dan Kelly and Bonilla are the backs on the bench.

For Gloucester, James Hanson makes a welcome return from injury and will pack down next to Val Rapava-Ruskin and Jack Stanley in the front-row.

Joe Simpson and Danny Cipriani continue their successful half-back partnership and will provide a midfield combination of Mark Atkinson and Billy Twelvetrees with plenty of ball.

Jason Woodward, Charlie Sharples and Matt Banahan are starting in the back three and complete the starting XV.

Jamie Gibson is set to make his Cherry and White debut off the bench having joined the club from Northampton Saints earlier this month and is part of an exciting list of replacements who will look to make the difference when they take to the field.

Amongst the replacements is Will Flinn, who has joined on-loan from Hartpury RFC. Scrum-half Flinn, joined Hartpury over the summer from fellow Championship side Coventry RFC. The Exmouth RFC product formerly played in the Premiership Rugby Cup for local rivals, Bath.

Form: This is Leicester Tigers’ 2,500th first-team game at their famous old ground, now known as Mattioli Woods Welford Road, appropriately their opponents Gloucester were the ninth visitors to the venue after it opened back in 1892. Tigers’ only victory in the last five rounds of Gallagher Premiership Rugby was 28-24 over Northampton Saints on 13 September. Leicester have been defeated in their round 1 fixture for the past three seasons. Not counting Gloucester’s ‘declared victory’ over Northampton Saints in round 22 which was never played, the Cherry & Whites have lost their last three 80-minute matches in Premiership Rugby since beating London Irish at Kingsholm on 5 September. Gloucester’s only away win in any competition in the past twelve months was on a visit to Worcester in round 14 of Gallagher Premiership Rugby. The last eight fixtures between the two clubs in all tournaments have been won by the home side on the day whilst Gloucester’s most recent success at Welford Road came in October 2007.

Loosehead prop Callum Black is set to make his 100th appearance for Worcester and lock George Merrick his first in Saturday’s opening match of the 2020/21 Premiership season against London Irish at Sixways.

Black has been named among the replacements and will become the 27th Warriors player to reach a century of appearances if, as expected he gets on.

It will be third time lucky for Black in his attempt to join the 100 Club having twice named in the squad for the final match of last season, away at Sale Sharks. That match was first postponed and then cancelled because of a Covid-19 outbreak in Sale’s squad.

Merrick has also been named among the replacements having joined the Warriors during the short break between seasons from Top 14 club Clermont Auvergne. Merrick returns to the Premiership after a season’s absence having previously played for Harlequins.

Club captain Ted Hill will lead Warriors having been released from England’s squad for the Autumn Nations Cup match against Ireland at Twickenham.

Team captain Matt Moulds is again sidelined by a foot injury which forced him to miss the latter part of last season.

There are first Premiership starts for centre Oli Morris and back-row forward Joe Batley, who impressed in last Friday’s victory over Northampton Saints in a pre-season friendly at Franklin’s Gardens.

Morris joined the Warriors Academy from Saracens last year and scored a try on his debut in the Challenge Cup victory over Enisei-STM in Russia. He will form a new centre pairing with Francois Venter against Irish and wear the number 13 shirt with Ollie Lawrence on international duty with England.

Batley made his Warriors debut as a replacement against Saracens in September having joined from Bristol Bears during the summer.

Saturday’s match will be preceded by a minute’s silence for Cecil Duckworth CBE, Warriors President, who passed away last weekend aged 83. Worcester players will also wear black armbands as a mark of respect.

Meanwhile, Matt Rogerson captains the London Irish side for what is set to be his 50th appearance for the Exiles.

Ben Meehan and Paddy Jackson are the half-back duo, as Curtis Rona partners Billy Meakes in the centres, the latter making his debut for London Irish.

Ben Loader and Ollie Hassell-Collins are named on the wings, as Tom Homer is set to don the 15 jersey.

Form: Worcester have ‘won’ their last three Gallagher Premiership Rugby fixtures, although the last of those was a declared 20-nil victory away at Sale in round 22 game that was not played. The Warriors have won two of their last three fixtures at Sixways, beating Harlequins and Saracens, but slipping up at home to Bristol Bears. London Irish have won just once since February; 22-19 at Exeter in round 21 of Gallagher Premiership Rugby. The Exiles have been victorious on the opening weekend for the past two seasons that they have been involved in Premiership Rugby. Worcester have lost just one of their last five matches against London Irish: 9-22 at Madejski Stadium in February 2018 whilst the Exiles most recent success at Sixways came in September 2013.

🏟️ After one of the shortest off-seasons ever, we return to action @RicohArena on Sunday and here is our line-up to take on @BristolBears… #COYW 🐝🐝🐝https://t.co/Cqsrew6l1W

Lee Blackett has named his first Wasps side of the new Premiership 2020/21 season to play Bristol Bears at Ricoh Arena on Sunday.

Jack Willis and Jacob Umaga return from international duty with England to take their places on the blindside flank and at fly-half respectively.

Joe Launchbury, Dan Robson, Will Rowlands and Matteo Minozzi are still away with their national teams. With club captain Launchbury starting for England, Thomas Young is named as captain at openside flanker.

Ben Vellacott and Lima Sopoaga are the only changes to the backline that played in the Premiership Final four weeks ago, replacing Robson and Minozzi. Malakai Fekitoa remains absent with a shoulder injury.

In the pack Tim Cardall and James Gaskell form the second-row pairing in the absence of Launchbury and Rowlands.

Brad Shields, Kieran Brookes, Simon McIntyre and Alfie Barbeary all return to the matchday 23, having missed out on the final due to COVID contact tracing protocols.

Meanwhile, Siale Piutau will skipper Bristol Bears in their opening game of the season.

Director of rugby Pat Lam’s men go in search of a first ever Premiership win at the Ricoh Arena. Wasps have won their last ten Premiership fixtures against Bristol and are unbeaten in their last fourteen such encounters since the Bears’ 26-21 victory at Memorial Stadium in September 2006.

With Callum Sheedy, Max Malins and Ioan Lloyd all away on international duty, Sam Bedlow makes his first start at fly-half in the Premiership, while Piers O’Conor switches to full-back.

19-year-old Academy fly-half Tom Wilstead is listed among the replacements and could make his competitive debut for the club in round one as Lam continues to give opportunities to homegrown youngsters.

Form: Wasps’ seven-game winning run in Gallagher Premiership Rugby ended in their 13-19 reversal in the Final against Exeter at Twickenham four weeks ago. Wasps’ only defeat at the Ricoh Arena since January was when Sale were the visitors on 25 August. Bristol Bears’ only defeat in their last six first team matches was to this week’s opponents Wasps at Ricoh Arena in last season’s semi-final. Bristol have been victorious in round 1 for the past two seasons. Wasps have won their last ten Gallagher Premiership Rugby fixtures against Bristol and are unbeaten in their last fourteen such encounters since the Bears 26-21 victory at Memorial Stadium in September 2006. Bristol have made five previous visits to Ricoh Arena in all competitions with their only victory being in the Premiership Rugby Cup in November 2018.