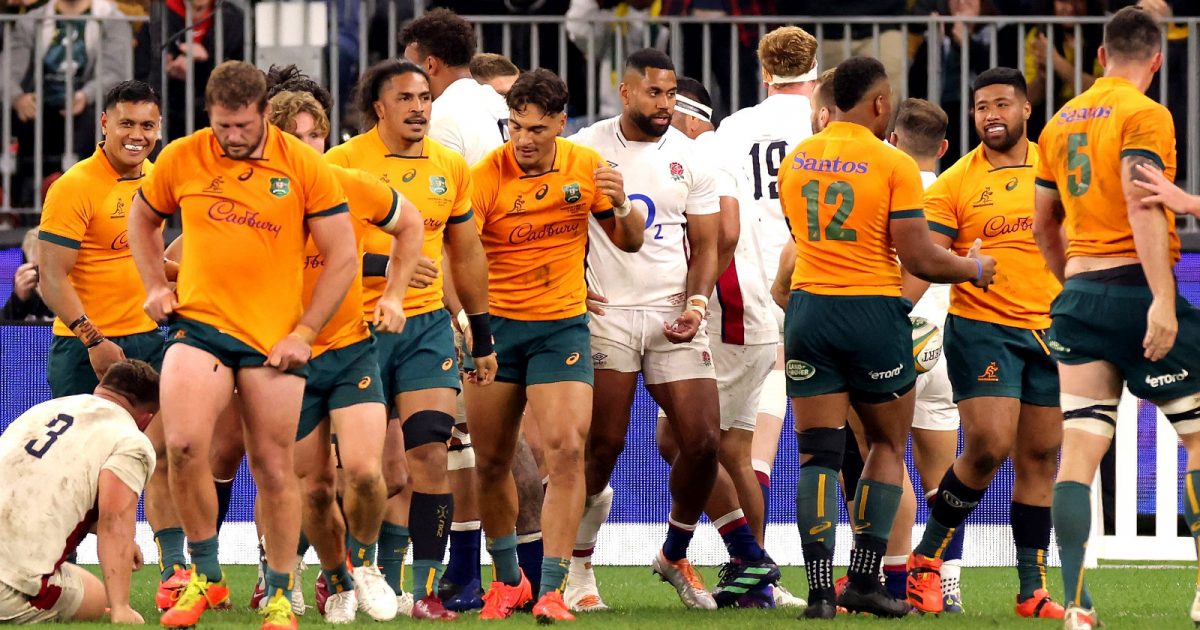 Following a 30-28 victory for Australia over England in their July international, here’s our five takeaways from the match in Perth on Saturday.

Australia overcame every piece of adversity imaginable to finally record a victory against Eddie Jones’ England by 30-28 in a match that started slowly, ground to a halt, yet blew into an absolute classic of passion and desire in the last quarter.

It marks Australia’s first win against the old enemy since the 2015 Rugby World Cup and the inaugural victory by the Wallabies over England’s Australian born coach Jones.

Losing Quade Cooper before kick-off, Tom Banks in the first half with an horrendous broken arm and a red carded Darcy Swain in the 33rd minute for a headbutt on Jonny Hill, a mountain emerged in front of them of the height of K2. But somehow, often by toes and fingertips, the Wallabies clawed their way up the rockface and finally to the summit in a win that was built wholly upon desire and determination.

In a manic 12-minute period in the last quarter, the Aussies produced 21 unanswered points, with Nic White, Michael Hooper and Samu Kerevi starring in a performance that will thrill the Perth spectators.

There’s no doubt half time came at the right time for the Aussies.

They needed to regroup and rethink and their solution was to get Kerevi running in straight lines with supporters either side of him to stretch the England defence.

A brilliant in-out piece of footwork by Jordan Petaia saw one try; a few moments later Folau Fainga’a scampered over from short range, and, as the pressure of the waters broke the English floodgates, Pete Samu added another.

Australia made a mess of the breakdown – chaos was the order of the day, with Hooper absolutely influential in marshalling the riot of rucktime. England panicked, they failed to think clearly, and despite the numerical advantage, they collapsed in front of the onslaught.

Noah Lolesio didn’t even know he was starting 15 minutes before kick-off and, whilst he had tough moments in defence and with the ball in hand, his accuracy off the tee compared to the off day Owen Farrell had, gave Australia a five point advantage in the goal-kicking stakes.

Scrum-time was a mess with some quite bizarre calls going each way as no side really gained consistent advantage. However, a measure of English mental confusion was to see them leave a tighthead exposed without a flanker when they still were in the game and, as a result, seeing James Slipper and Scott Sio melt their scrummage into the Perth turf.

Little things matter – the catching of Marika Koroibete in the kick-offs, the intelligence of knowing where to play and to create effective exit strategy were all parts of the Aussie mindset that said ‘we are not giving up’.

With Brisbane a week away, the Aussie team have a foundation to refresh Fortress Suncorp upon – they were clunky at times, but with another seven days training ahead, expect to see an even better performance from them in round two of this three match series.

England did a lot of good things well. They carried hard, direct and straight. Their early ruck speed was magnificent but the thing they did poorly was convert perceived territorial possession into points, a key component of rugby, particularly when you’re playing against Super Rugby teams.

Will Stuart might have had a less than dominant display in the scrum, but he and Hill carried superbly, following in the footsteps of the impressive Ellis Genge. Elsewhere, both opensides Tom Curry and Lewis Ludlam had games to remember but they couldn’t do enough to secure a victory.

In the backline, there seemed to be confusion and a lack of flow between the midfield – it’s almost a case of two many bosses and not enough workers as Farrell and Marcus Smith took turns at 10 and 12 but that created a lack of continuity of attack as neither man allowed the other to run the game.

But yet again, England’s defence also failed to fire – since Anthony Seibold took the reins in October, the once watertight England have leaked like a sieve. The corner channel defence is all over the place and the Petaia try illustrated precisely the confusion that exists in the backline and 16th man defence.

The biggest take out is points matter and defence matters even more – and in both situations England need to do a lot better.

At 19, Henry Arundell is already one of the most talked about players in England.

He has shot into English rugby fans hearts like no other player since Jason Robinson defected from Rugby League. Yes, he was certain to come on tour, but given the paucity of rugby he has played, his credentials at Test level before the match were questionable.

However, in the 76th minute, this pocket battleship made his statement that he has arrived on the big stage. A jink, a drive through a tackle and a sidestep saw the youngster blitz the Wallaby defence in a 30-metre run that defined his first touch in rugby and underlined the promise of an incredible international career that seems to be ahead of him.

Should he start next week? It’s a tough one – he’s green, Test rugby is about defence and organisation, but when a player has the talent of this lad, our view is let him sink or swim. England looked toothless in attack before he came on; when he arrived, the Arundell bite was as potent as a viper.