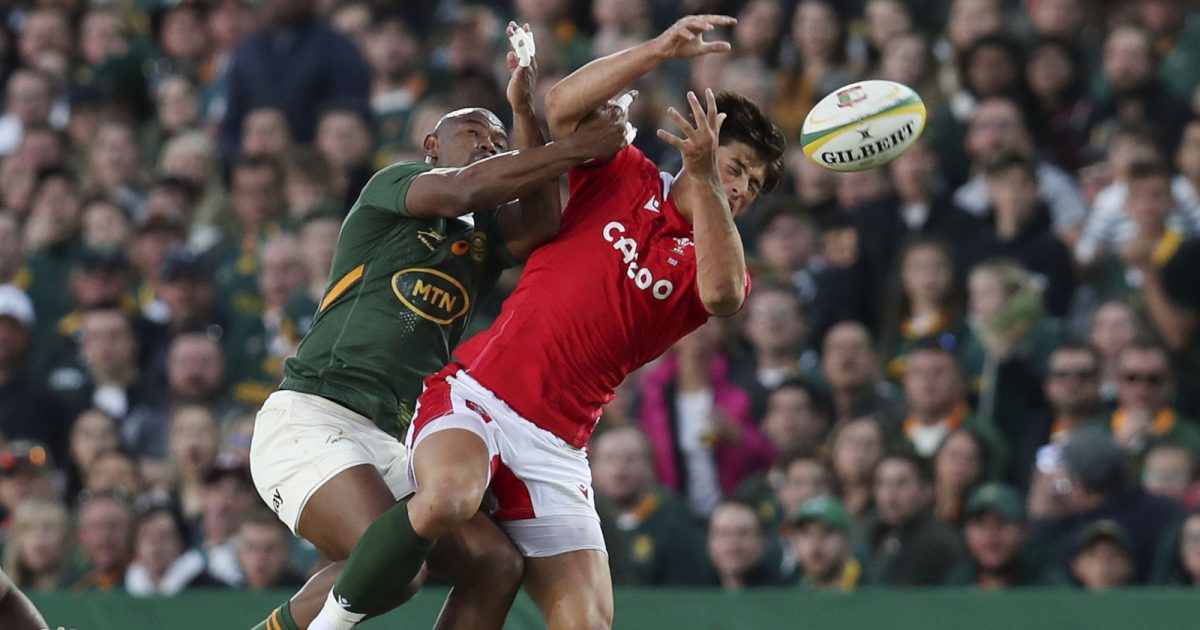 Following a 32-29 victory for South Africa over Wales in their July international, here’s our five takeaways from the match at Loftus Versfeld on Saturday.

The expected wisdom of this weekend of Test rugby was that England would beat Australia, Ireland were in with a chance against New Zealand and that South Africa would obliterate Wales, a side that lost against Italy in their last international outing.

However, Wales put in one of their greatest performances in defeat in recent times in a cliff-hanger that had more cards than a networking convention and saw the Springboks finally run out 32-29 winners in the very last kick of the match against 13 men.

For a side written off before kick-off, they should hold their heads high in defeat. They played virtually all of the second half with 14 men maximum, vacillating between 12 and 13 at times, and their defence never once crumbled.

It took a huge effort from the Springbok driving maul to offset their dismal creativity in the backline, but they’re world champions with good reason and in the end, they just had enough in the tank, and enough players on the pitch, to get a job done.

The match started with a supposed one minute silence for arguably the greatest Welshman ever to tour South Africa – the great Phil Bennett.

Despite the huge significance of this supposedly magical moment, and the meaning of it to virtually the entire rugby community and the respect with which almost every country (bar one, so it seems) held Bennett, it was disgraceful to hear the home supporters chatting and laughing through the tribute. Rugby is a game that separates itself by self-policing a code of behaviour and the rattle in the stands that greeted Bennett’s moment is certainly not part of that code, nor ever will be.

It would have been apt if Wales had have closed the game out in Bennett’s memory. They spent 79 minutes silencing the disrespectful idiots in the crowd and one moment more would have been more than karma for the absolutely appalling behaviour at the start of the match.

Yet again, it was the rolling maul that saved the blushes of the backline of the Bokke. For the first half, their attack staggered laterally as Elton Jantjies absolutely failed to get his backs moving and handling. In fact, one wondered if the world champions had actually met before kick-off, such was the disconnect in their three-quarters.

Wales stayed in the match as long as they repelled and held the Springbok rolling maul, and for 45 minutes they did precisely that. It was only when they were down to 14, under immense pressure, that their maul defence finally buckled. As the match progressed, the litany of cards cost them dearly and prevented them from defending as sharply as they did early doors.

However, player of the match, Jasper Wiese, barrelled big carries into the Welsh midfield all day. It was his, and the bomb squad’s, massive carriers and drives that took them home, if only by their fingernails.

Wayne Pivac sent Louis Rees-Zammit back to Gloucester to work on other aspects of his play to become a more complete rugby player.

Judging from his showing tonight, he is as quick to learn as he is to run and he put in easily his most impressive showing in the famous red shirt. His run down the right flank for the opening try made Lukhanyo Am and Makazole Mapimpi seem as if they were standing still as he thundered past them and later on in the first half, he finished equally strongly to claim a brace.

But it was his all round play: his defence, his aerial game and so on that looked the most impressive thing on view. Based on what we saw on Saturday, he has gone up another level since the British and Irish Lions tour and his trajectory will continue.

Wales now know they have nothing to fear in a week’s time. They know that they’ve unearthed a corker of an openside in Tommy Reffell who was absolutely outstanding on debut. Up front, Gareth Thomas put in an immense stint in the loose, and behind the pack, Kieran Hardy and Dan Biggar were at the top of their game.

South Africa will be worried. Until Damien Willemse moved to 10, they were toothless, despite the excellence of Faf de Klerk. Yes, their set-piece, and the third set-piece – the aerial game – is the best around, but is that enough to win another World Cup?

This week’s build up will be interesting. Can Wales rejuvenate from such a mammoth effort? We know they’ve the fire power to score tries but staying to the end in the set-piece is another matter.