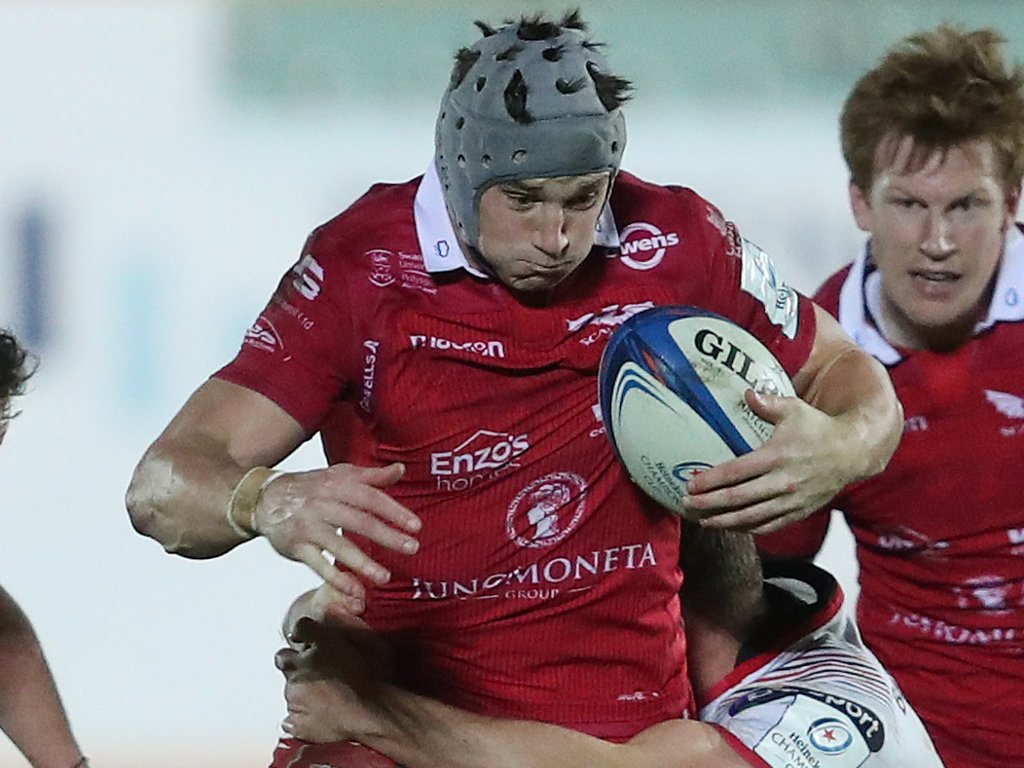 The action from the PRO14’s opening round continues on Saturday with Scarlets, Connacht and Edinburgh hosting Munster, Glasgow Warriors and Ospreys respectively.

It promises to be a big day for the Davies brothers on Saturday with Jonathan poised for his first PRO14 run out in 17 months and James set to make his 100th appearance for the Scarlets.

Wales and British & Irish Lions centre Jonathan last featured in the competition in the play-off defeat to the Ospreys at the Liberty Stadium in May 2019.

He returned from a long-term knee injury in last weekend’s warm-up match against the Ospreys and comes into the side to face Munster as one of three personnel changes from the European Challenge Cup quarter-final loss to Toulon.

In the back three, promising youngster Tom Rogers will make his first PRO14 start at Parc y Scarlets after impressing in recent weeks. The 21-year-old Cefneithin product will feature on the wing in place of the injured Johnny McNicholl.

Leigh Halfpenny, fully recovered from the head knock he picked up in the south of France, and Steff Evans make up the rest of the back three.

With Johnny Williams ruled out because of illness, Davies partners Steff Hughes in midfield, while Dan Jones and Gareth Davies are at half-back.

The pack shows one change from the eight that took the field at the Stade Mayol with experienced South African international Werner Kruger replacing Samson Lee at tighthead prop. Lee is ruled out after picking up a head knock in training this week.

Having made his debut seven years ago, Davies is poised to become the latest player to reach the century milestone for the Scarlets if he comes off the bench.

Behind the scrum there is a welcome return for Wales international fly-half Rhys Patchell who has recovered from a calf issue. Kieran Hardy and Tyler Morgan make up the rest of the replacements.

Damian de Allende and Chris Farrell form the centre partnership with Craig Casey and JJ Hanrahan in the half-backs.

James Cronin, Rhys Marshall and John Ryan pack down in the front-row with Jean Kleyn and Tadhg Beirne, who faces his former side for the first time, in the second-row.

Connacht head coach Andy Friend has named his squad for Saturday’s PRO14 season opener against Glasgow Warriors, with Jarrad Butler leading out the side from blindside flanker.

Butler begins his third season as Connacht captain having joined in 2017, and he starts in the number six shirt with Conor Oliver earning a start at openside after an impressive pre-season campaign. Paul Boyle completes the back-row at number eight.

There’s an experienced look to the front-row with Denis Buckley, Dave Heffernan and Finlay Bealham all named, while Gavin Thornbury and Quinn make up the rest of the pack in the second-row.

Friend has named the same backline that put in a brilliant attacking display against Ulster at the Aviva Stadium, with Irish international trio Kieran Marmion, Jack Carty and Bundee Aki forming the 9-10-12 axis.

Tom Farrell partners Aki in the centre, while John Porch continues at full-back with Alex Wootton and Peter Sullivan on the wings.

Meanwhile, Glasgow Warriors head coach Danny Wilson has named a matchday 23 containing no fewer than 17 internationals for this weekend’s clash.

Club co-captains Ryan Wilson and Fraser Brown are both selected in the starting XV, as the Warriors look to defend a strong recent record in visits to The Sportsground.

Brown is flanked in the front-row by Oli Kebble and D’arcy Rae, with the former making his 50th appearance in Glasgow Warriors colours.

Scott Cummings and Rob Harley are paired together in the second-row, having impressed both in the loose and at the set-piece against Edinburgh last time out.

Matt Fagerson packs down at number eight, with the vastly experienced duo of Wilson and Chris Fusaro starting on the flanks.

Behind the scrum, Ali Price gets the nod to start in the number nine jersey, partnering Adam Hastings in the half-backs.

Stafford McDowall lines up at inside centre alongside Nick Grigg, with both men having caught the eye in the August win at BT Murrayfield.

The back-three sees Robbie Nairn handed a first start for Glasgow Warriors since the opening match of the 2019/20 season against the Cheetahs in Bloemfontein, as the former Scotland U20 joins Tommy Seymour and Huw Jones in the starting line-up.

On the bench, Aki Seiuli returns to the matchday squad for the first time since February after recovering from a thumb injury to join George Turner – also in line for his 50th appearance for the club – and Adam Nicol as the front-row cover.

New signing Fotu Lokotui is in line to make his club debut after being named in the number 20 jersey, whilst Richie Gray completes the pack replacements.

George and Pete Horne start on the bench this weekend, as Ratu Tagive rounds out the replacements.

With a number of key players injured and unavailable, Edinburgh head coach Richard Cockerill has been forced to reshuffle his squad, with six changes to the side that faced Bordeaux-Bègles in last month’s Challenge Cup quarter-final.

In the back three, Blair Kinghorn and Duhan van der Merwe both miss out through injury and are replaced by Damien Hoyland and Jamie Farndale at full-back and wing respectively.

Now back fully fit, Scotland internationals Mark Bennett and WP Nel both return to the matchday 23 after missing out on the quarter-final test in Bordeaux two weeks ago.

In the back-three, Hoyland and Farndale are joined by Scotland star Darcy Graham, who retains his place on the opposite wing.

Captain and hooker Stuart McInally packs down alongside props Pierre Schoeman and Simon Berghan in an unchanged front-row, while Scotland locks Grant Gilchrist and Ben Toolis continue in the second-row.

Meanwhile, Justin Tipuric will lead the Ospreys for the 51st time. The Wales flanker joined in the back-row with Olly Cracknell and young Morgan Morris.

In the backs, Stephen Myler and Rhys Webb form the half-back partnership with youngsters Reuben Morgan-Williams and Josh Thomas covering. Luke Morgan, Mat Protheroe and Dan Evans are named as the back three with Keiran Williams and Owen Watkin partnering in the centre. Tiaan Thomas-Wheeler completes the 23-man squad.