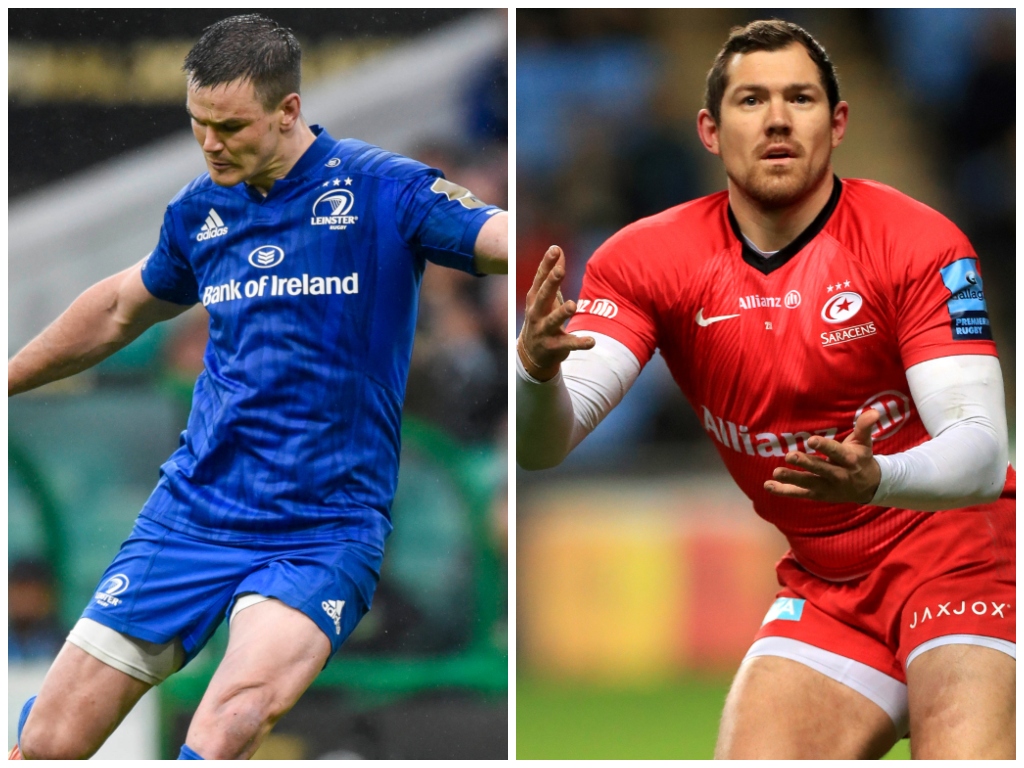 There’s two blockbuster quarter-finals in the Champions Cup on Saturday as Leinster take on Saracens before Clermont host Racing 92.

Johnny Sexton will captain Leinster with two players, Hugo Keenan and Will Connors, making European debuts from the start and a third, Ryan Baird, from the bench.

Jordan Larmour is selected at full-back and will win his 50th cap for Leinster in the number 15 jersey while Keenan will make his European debut on the right wing with James Lowe selected on the left.

In the centre once again boss Leo Cullen has selected Robbie Henshaw and Garry Ringrose as his partnership.

In the half-backs, Luke McGrath starts at scrum-half alongside captain Sexton.

Cian Healy will become the fourth most-capped Leinster player of all time when he pulls on the number one jersey. He is closing in on Jamie Heaslip who is in third place on 229 caps.

Seán Cronin is selected alongside Healy in the front-row as is Andrew Porter.

Devin Toner and James Ryan will again form the second-row partnership for Leinster Rugby this week while in the back-row, Caelan Doris will start at blindside flanker, with Will Connors selected at openside and Jack Conan at number eight.

On the bench, Ryan Baird is another player in line to make his European debut should he be introduced.

Meanwhile, Jackson Wray will make his 250th appearance for Saracens in this European showdown in Dublin.

The 29-year-old debuted for Sarries in 2008 and has been integral to the club’s on-field success over the past decade.

He is joined the back-row by Mike Rhodes, who is closing in on 100 outings for the Men in Black, and Billy Vunipola – a try scorer in last season’s European final.

His brother Mako returns to the front-row alongside England teammate Jamie George and South Africa international Vincent Koch, while Maro Itoje is partnered by Tim Swinson in the second-row.

Scotland international Swinson will run out for his 50th European match in Dublin.

In the back division, Owen Farrell’s suspension sees Alex Goode switch to fly-half to play outside scrum-half Richard Wigglesworth.

Elliot Daly fills in at full-back with Sean Maitland and Alex Lewington taking spot on the wings. Captain Brad Barritt and Duncan Taylor make up the midfield.

Replacements Alec Clarey and Dom Morris will earn their Champions Cup stripes should they enter the fray.

Following the game in Dublin, it promises to be an epic French derby between Clermont and Racing 92 as the European giants face off at Stade Marcel Michelin.

Clermont breezed through the pool stages, winning five out of their six games, while Racing won four and drew one in a difficult pool that included Saracens and Munster.

In team news, the familiar Clermont half-back combination of Morgan Parra and Camille Lopez is named while Wesley Fofana, Damian Penaud and Kotaro Matsushima will also run out as starters as inside centre, right wing and full-back respectively.

Destructive number eight Fritz Lee is joined in the back-row by Arthur Iturria and Judicaël Cancoriet while Sitaleki Timani and Sébastien Vahaamahina form a hulking second-row partnership for this quarter-final.

Like Clermont, Racing 92 are led by their scrum-half, Teddy Iribaren, who will look to spark plenty of attacks alongside Finn Russell on Saturday.

Juan Imhoff, Louis Dupichot and Simon Zebo will hope to benefit from their team’s enterprising style of play in the back three, outside centres Olivier Klemenczak and Virimi Vakatawa.

The winner of this fixture will face the winner of the Leinster v Saracens clash in the semi-finals, which take place on Saturday, September 26.